A short work of fiction which is entertaining, easy to read, somewhat gory, and has a serious message about the dangers of religious fanaticism.

Although the author is my eldest son, he never lets me see a word of his writings until they have been published. This is his third book, following “The Monster Hunter’s Handbook” and the graphic novel “Jihad Squad.”

It is a work of fiction and apart from seeing the cover and the blurb on the back reproduced below, I had no idea what to expect when I started reading it.

“Clara Mandrake screams in the night, because she knows he's there. The monster lurks in her wardrobe, all fur and teeth and claws. He's coming for her. But will her sanity tear before her flesh?

Fahmaia Hashad hears the words of Allat, the One Goddess. The world shall perish for its sins, unless Fahmaia and her people save it. The cost will be heavy, paid in blood.

Silas Renshaw puts his sword on his belt, and embarks on the career he knows may kill him. That's the life of an apprentice monster hunter. It's too late to turn back now.

The hunter. The fanatic. The child in the darkness. Their paths weave through blood and cries and corpses, beneath the glare of gods and monsters.”

My comments after reading the book 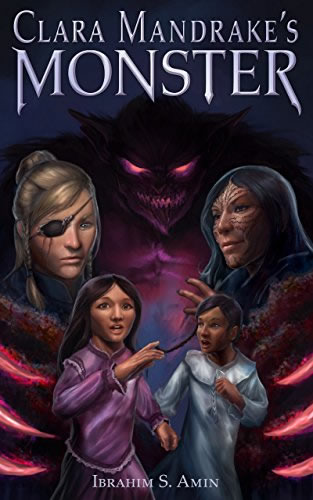 Since this is a work of fiction, I do not want to risk spoiling the plot for readers.

I finished the book fairly quickly as bedtime reading over a few days using the Kindle app on my iPad. The paperback hard-copy is 331 pages of well spaced text.

It passes the first test of any work of fiction. That is, do you want to turn the next page? Once I started reading it, I perpetually wanted to know what happens next. Some of the scenes were particularly enthralling, especially the large-scale town brawl!

It is hard to pin down precisely when and where the book is set. It is clearly planet Earth, albeit influenced by magic. Geographically, the location feels like Britain or northern Europe (or indeed North America) in terms of climate, at least as far as the environment of Clara Mandrake and Silas Renshaw mentioned above are concerned. However, the adjacent culture of Fahmaia Hashad feels more like Arabia.

The body count is enormous, but provided you are not squeamish about fictional characters being killed off, I think almost everyone will enjoy reading it. There is also an underlying serious message about the dangers of certain types of religious beliefs.