“How should supporters of Israel get its message across to Muslims?” While Muslims are not the most natural audience for Israel advocacy, I recently had to think about that question.

I have written about the Israel / Palestine conflict on several previous occasions, for example after the 2008 Gaza conflict began and after the Israeli assault on the Gaza flotilla. Accordingly I never expected to be asked to speak at an Israel advocacy event, but when I was asked I decided to accept.

The Big Tent for Israel

A few months ago I read in the Jewish Chronicle that an Orthodox rabbi, Jonathan Guttentag, had decided to organise a major event in Manchester to promote Israel advocacy. However he was not going to invite any Reform or other non-Orthodox rabbis to speak, and this caused a significant concern in the Jewish community. On 27 October 2011 the Jewish Chronicle reported that Rabbi Guttentag had agreed that speakers should be selected by a diverse committee.

A few days later, when I met my friend David Berkley QC, he mentioned that he was a member of the organising committee and asked me if I would like to be a speaker. I agreed that David could put my name forward to the rest of the committee as someone who was willing to speak. I also shared with David some of the tentative thoughts that later became my piece "An Israel for All Israelis" which criticise some aspects of Israel today.

Given my comments, I wasn't sure if I would be invited, but a few weeks later my official invitation to speak arrived at the event which took place on Sunday 27 November 2011.

Format for my participation

The event was recorded on video. I was recently sent a link to the video of my event, and on 17 February 2012 amended this page to embed the video. Unfortunately for legal reasons the videos are now not available on the internet, so I have removed the embedding as the video will no longer play. I will restore it if it becomes available again.

The one-day event had some plenary sessions along with many parallel workshops. I was in the last slot of the day when only three sessions were scheduled to run in parallel. Accordingly our session had 200 – 300 in the audience, quite a lot more than some of the earlier workshops when more were running in parallel.

I was part of a panel in the political work stream to discuss the topic "Changing the Muslim Narrative in the UK." The panel was chaired by David Berkley and the other panel members were Prof Alan Johnson of BICOM and Kasim Hafeez.

My goal in participating was to influence the views of the audience slightly towards my own position.

Realistically that is the most that one can aspire to achieve in the time available. I also considered it important to respect the objective of the organisers in inviting me; using the platform for an extended critique of Israeli policies would be discourteous as well as being unproductive.

I believe that what I said is worth sharing more widely. The comments below are based upon my skeleton outline. For stylistic ease I have written them in the present tense as if I were addressing an audience, but the comments below do not purport to repeat what I said on the day although they use the same speaking skeleton and make the same points.

Good afternoon. Several years ago I would never have expected that I would end up speaking at an Israel advocacy event. However I am a member of Conservative Friends of Israel because if you believe in a two state solution, as I do, being a friend of Israel is perfectly consistent with being a friend of Palestine.

I want to cover three things:

Why the Muslim community matters

Muslims are now about 4% of the population, about 2.5 million, and this percentage is expected to continue increasing. Indeed there are almost 100,000 converts to Islam in Britain and that compares with a British Jewish community of only around 300,000. There are now eight Muslim members of Parliament and again I expect that number to continue increasing.

Accordingly the Muslim community is too significant for Israel advocates to ignore. Its opinions will be increasingly influential within British politics.

What the problem is

From the perspective of advocates for Israel, the challenge is not that Muslims are critical of Israel. Rather the problem is that most Muslims do not even accept that Israel has a case at all. Instead the state of Israel is regarded by many Muslims as being wholly illegitimate.

This is combined with widespread ignorance regarding the facts about Israel. Having had a science education, I will generalise from a sample of one! A few weeks ago I met a Muslim university graduate of South Asian ethnicity who works for a Big 4 accounting firm. He simply did not know that Arab citizens of Israel have a vote in Israeli elections.

Recommendations for Israel advocacy towards Muslims

Instead, start by talking about the present. While present-day facts can still be disputed, it is possible to reach agreement on the facts as they are today, whereas agreement about the history is almost impossible. It is a fact that Israel today has about six million Jewish citizens and they are not about to disappear or leave the country. It is also a fact that Israeli Arabs are much better off than Arabs who live in Israel's immediate neighbours. Even so, they do suffer from job discrimination and other forms of discrimination that Israeli charities which I support such as the Abraham Fund Initiatives are seeking to counter. It is worthwhile encouraging Muslims in Britain to visit Israel.

The next step is to explain why a binational state is unacceptable to Israeli Jews. A binational state is the preferred option of many British Muslims and I favoured it myself until David Berkley explained the fundamental problem to me. An Israel which did not have a Jewish majority could not guarantee to be a permanent place of refuge for world Jewry in the event of renewed persecution. I myself am now extremely aware of the history of the SS St Louis, and that some Jews genuinely fear the risk of persecution even in countries such as the UK and the USA. Accordingly from a Jewish perspective it is vital that there is at least one country in the world that will always take in Jewish refugees, and that requires Israel to have a Jewish majority.

Having reached some level of agreement regarding the present-day facts and the particular concerns of Israeli Jews, one can then invite British Muslims to discuss possible solutions to the Middle East dispute. Focusing on a shared future that Jews and Arabs can build together will be far more productive than focusing on the past.

The above points were not made in a single block as written above but were made during a number of question and answer interchanges. While to me it seems obvious that one should start by discussing the present rather than the past, several people from the floor disagreed. In my responses I explained again why in a short discussion it is virtually impossible to reach agreement about the past.

Overall I enjoyed my participation on the panel and was present throughout the day as an attender along with my wife. 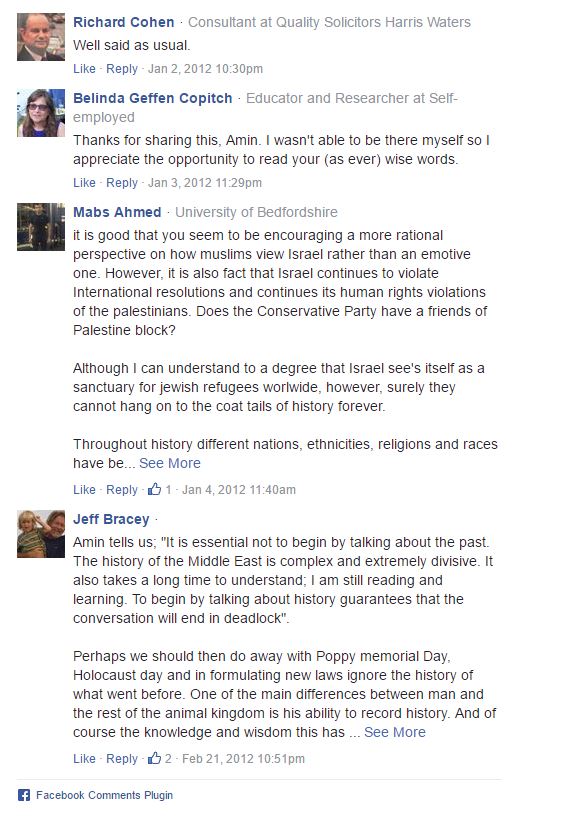