Earlier today I gave my second "Thought for the week" on BBC Radio Manchester. The recent commemoration of Holocaust Memorial Day was in my mind. The text is reproduced below. The precept in Quran 5:2 also appears in the Talmud with a citation on the page Reflections on visiting Yad Vashem.

Just over a week ago, our country commemorated Holocaust Memorial Day, the anniversary of the liberation of the Nazi death camp at Auschwitz. I attended the London event, while my wife who was in Manchester attended the Manchester City Council commemoration at the Cornerhouse on Oxford Street.

The Manchester commemoration showed the film “Nicky’s Children” which my wife found very moving. The film tells the story of Sir Nicholas Winton, who is still alive aged 102. In 1939 he organised eight trains which brought over 600 Jewish children from Czechoslovakia to Britain before the outbreak of World War 2, almost certainly saving their lives. Most of their parents later died in the Holocaust. For 50 years Nicholas Winton told no one about this amazing act of heroism, but it emerged in the 1980’s and he received many honours both here and in the Czech Republic, including having an asteroid named after him; it is called “19384 Winton.”

At the same time about 10,000 other Jewish children also came to the UK by train without their parents. This is called the kindertransport, German for transporting children, and there is a commemoration statue outside Liverpool Street station in London. It is hard to walk past it without crying.

The Muslim holy book the Quran, says in Surah 5 verse 32 “if anyone saves a life, it shall be as though he had saved the lives of all mankind.”

I was reminded of this two years ago in Israel. There on a kibbutz I met a kindertransport child for the first time when he entertained our group for tea in his home. Henry is now in his 80’s, but he came to the UK on one of the kindertransports as a teenager, and was fostered in Liverpool where he grew up and married before moving to Israel. As he told me about his 4 children, his 18 grandchildren and his 11 great-grandchildren, the words of the Quran came to life. When you save one person, you save all of the people who will live through that one person. 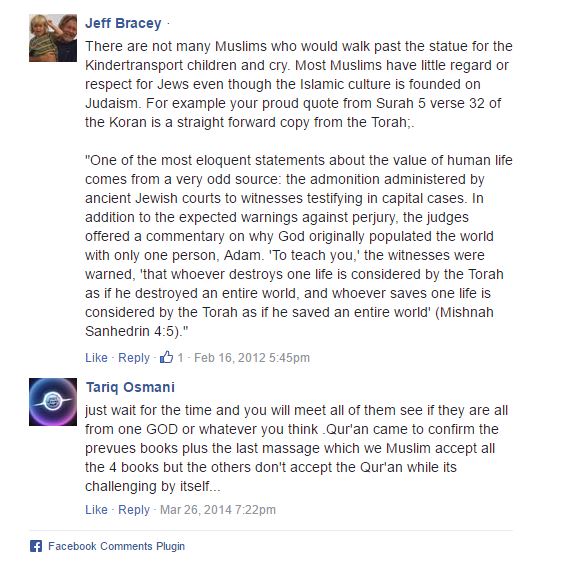