I visited Yad Vashem on the morning of 1 January 2010, as part of the study tour of Israel and the West Bank that my wife and I went on, which was organised by FODIP (the Forum for Discussion of Israel and Palestine).

Unfortunately the time schedule did not allow us to visit the documentation centre, but we covered most of the rest of the grounds. It was a beautiful day, with a clear blue sky and mild temperatures, matching the beauty and solemnity of Yad Vashem itself.

What is Yad Vashem?

As explained on their website, Yad Vashem is the Jewish people’s living memorial to the Holocaust. The name itself is very moving. It comes from Isaiah chapter 56 verses 1-7 (King James Version):

Eunuchs are unable to have children who will remember them and carry on the tradition of their families. In verse 5 God promises them a name (a "yad vashem") better than sons and daughters, an everlasting name that will never be forgotten.

In many cases the Holocaust wiped out entire families, leaving no one to mourn the deceased or to remember them. The essential roles of Yad Vashem are to ensure that the dead are not forgotten, and to educate the living and future generations against the recurrence of such evil.

The Holocaust and Jewish “passivity”

Yad Vashem was established in 1953. However it was not Israel’s first Holocaust commemoration centre. That was the Ghetto Fighters' House – Holocaust and Jewish Resistance Heritage Museum which was founded in 1949 to remember those in the Warsaw Ghetto who fought and died resisting the Nazis.

Ophir Yarden, Director of Educational Initiatives at the Interreligious Coordinating Council in Israel, acted as our educational guide during the FODIP trip. He reminded us that in the immediate aftermath of the Holocaust, many Jews felt a deep sense of shame that more of them had not died fighting. This was the reason that the first Holocaust remembrance centre was specifically focused on a group of Jews who had fought back as best they could.

Warsaw Ghetto Square, which is an open space within Yad Vashem used for major events, brings out the dichotomy. The Wall of Remembrance consists of two sculptures by Nathan Rapoport set in a wall of red bricks, which symbolize the ghetto walls. In the centre of the first sculpture, entitled "The Warsaw Ghetto Uprising", stands the leader of the uprising, Mordechai Anielewicz amongst a group of armed Jews who are resisting. 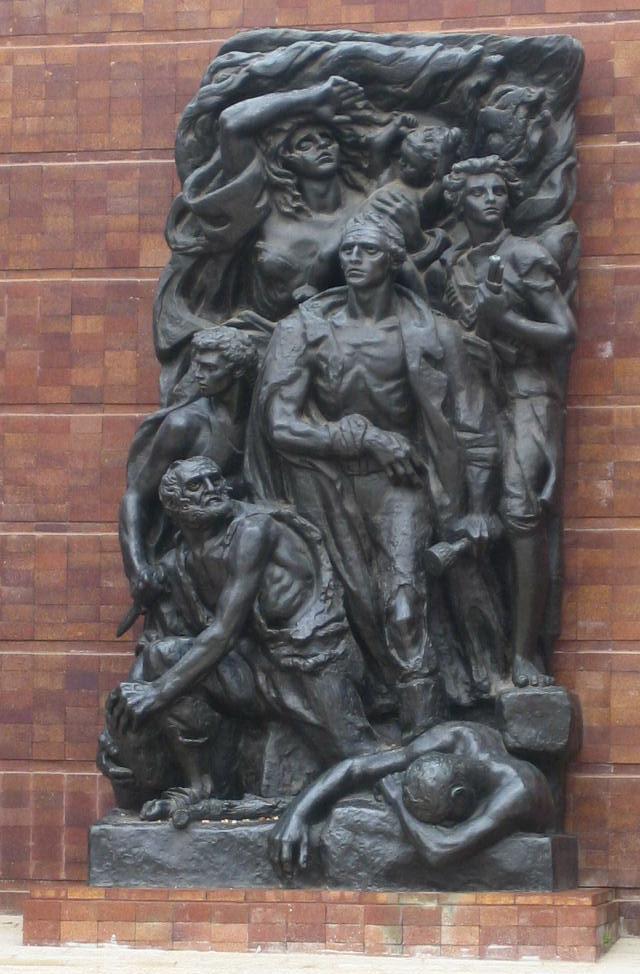 The second sculpture, entitled "The Last March", depicts Jews passively being marched by German soldiers to the death camps.

This is a solemn but beautiful commemoration built in 1987 for the 1.5 million Jewish children who died in the Holocaust. I was particularly moved by the plaque thanking Abraham and Edita Spiegel of California who gave a major donation towards this memorial in memory of their son, Uziel, who was killed in Auschwitz in 1944. (Elsewhere I have read that he was aged 2 ½.)

I was overwhelmed as I thought about the pain that his parents must have carried for so many decades afterwards.

The Garden of the Righteous

Both Judaism and Islam teach that saving one life is like saving all of humanity.

Because of this did We ordain unto the children of Israel that if anyone slays a human being unless it be [in punishment] for murder or for spreading corruption on earth - it shall be as though he had slain all mankind; whereas, if anyone saves a life, it shall be as though he had saved the lives of all mankind. And, indeed, there came unto them Our apostles with all evidence of the truth: yet, behold, notwithstanding all this, many of them go on committing all manner of excesses on earth.

During the Holocaust, many people either participated due to antisemitic hatred, or stood to one side because they feared for their own safety if they tried to help the Jews. However many put their own lives, and often the lives of their families, at risk because their ethical or religious beliefs meant they could not allow themselves to look the other way. Yad Vashem has a very thorough process for documenting and honouring such righteous gentiles. Many have a tree planted in their memory in Garden of the Righteous. I photographed some of the plaques; two stand out for me.

Oskar Schindler was immortalised in Thomas Keneally's 1982 novel "Schindler's Ark" which became Steven Spielberg's film "Schindler's list." Most of the film was shot in black and white and is harrowing. For me the most moving moment in the entire film is when it changes into colour as the descendants of those Schindler saved file past his gravestone, each placing a pebble on it in the Jewish tradition, vividly bringing to life the meaning of the quotations above. 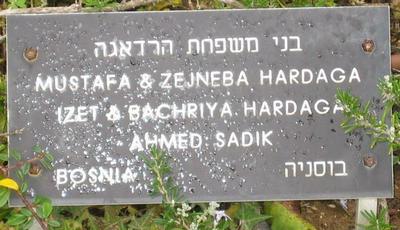 My eye was also caught by the plaque for the Hardaga family as Bosnian rescuers. In the early 1990's my wife was heavily involved in assisting Bosnian Muslims who had taken refuge in Manchester from the horrors of the civil war.

During 2010 the non-profit organisation Faith Matters published a booklet "The Role of Righteous Muslims" by Fiyaz Mughal and Esmond Rosen to increase public awareness of Muslims who had saved Jews during the Holocaust. It can be downloaded free from the Faith Matters website, and my photograph of the plaque appears on page 19. The booklet explains that Mustafa and Zejneba Hardaga were husband and wife; Ahmed Sadik was Zejneba's father. Sadly Ahmed Sadik was denounced and executed by the Germans for having saved Jews. In 1994 during the Bosnian war the Hardaga family were themselves given refuge in Israel.

I believe very firmly that remembrance of the horrors of the Holocaust is a duty for people of all religions and none, and is something required of me as a Muslim. This applies irrespective of any views that one may have regarding Israel’s treatment of the Palestinian people, which is why I wrote my piece on this website “No Muslim should deny the Holocaust.”

That is also the reason I recently became a donor to Yad Vashem UK Foundation.