As explained in my 2012 Conservative Home article “Islamophobia – a trap for unwary Muslims” the definition of Islamophobia published by the Runnymede think tank in 1997 was so flawed that I regarded it as harmful to Muslims.

Many Muslims staunchly defended the word, albeit often with the rather weak defence that the word was better than nothing, rather than with an explanation of why the definition was a good one!

Runnymede clearly recognised there was a problem with the definition, because in 2017 they published a new definition, even though they called it a refinement rather than bringing themselves to say that it was a replacement because the 1997 was seriously deficient. In late 2018 the All Party Parliamentary Group (“APPG”) on British Muslims published their own definition. Many organisations have adopted the APPG definition.

However, the public have not. As someone who is very attuned to the nuances surrounding the word “Islamophobia”, when the word is mentioned I always ask myself “What definition of the word ‘Islamophobia’ is this person using?”

I had a striking example of this on 11 March 2020 when I had my first ever appearance on “The Moral Maze.”

The weekly BBC Radio 4 programme “Moral Maze” describes itself as “Combative, provocative and engaging live debate examining the moral issues behind one of the week's news stories.”

On 11 March 2020 the programme was devoted to a discussion about Islamophobia.

This was particularly topical as a few days earlier the story had broken that Trevor Phillips, former chairman of the Equalities and Human Rights Commission had been suspended by the Labour Party for historic comments which were alleged to be Islamophobic.

The Policy Exchange think tank has published a full dossier about the allegations and Mr Phillips’s response.

The programme was presented by the BBC’s Michael Buerk who chaired a panel comprising:

The chairman and the four panel members collectively proceed to hear from a series of witnesses, one at a time. In this programme, the witnesses were the people below, listed in order of appearance:

Listening to the programme

“Moral Maze” is presently available on BBC Sounds but I am not clear whether this will be permanent. Clicking on the poster below will take you to the BBC Sounds website to listen to the programme.

My appearance starts at 26:15 but I strongly recommend listening to the whole 43-minute programme. 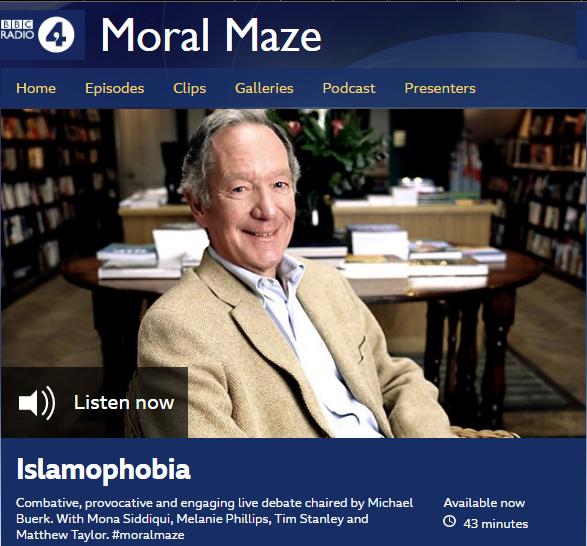 The Islamophobia definition the participants use

It is not practical for me to transcribe the entire programme. However, I have jotted down some points below, all directed at ascertaining which definition is being used. They are in chronological order.

Most of the time the presenters do not state which definition of the word “Islamophobia” they are using. Even when someone, like Ibrahim Mogra below, claims to use the APPG definition, their words show that they are using not that but the Runnymede 1997 definition.

Why does this matter?

The programme shows that these highly knowledgeable panelists and witnesses, many of whom are immersed in the issues, have problems being precise about which Islamophobia definition they are using, and most of the time tend to use the Runnymede 1997 definition.

After the Runnymede 1997 definition had 20 years of promotion by many Muslim organisations and their supporters, it is in practice almost impossible to make commentators forget it and instead apply a different definition.

That would be true even if the revised definition were a good one, which the APPG definition is not, as explained in my critique of it on my page “The word Islamophobia should be abandoned.”