Many Muslims use the word "Islamophobia" as if it meant "hatred of Muslims." However it does not; the word Islamophobia has a distinct established meaning, as explained later on this page.

I have set out my position in a comment piece on Conservative Home which is reproduced below.

There are some statements with which almost everyone in our society agrees:

There are a few people, such as racists or religious extremists, who reject some or all of the above rights, but such rejectionist views are generally regarded as being “beyond the pale.”

Given this overwhelming consensus, there is a mystery which needs explaining. When leading British Muslims complain about Muslim citizens having the above rights infringed, instead of receiving overwhelming support, they are met with a cacophony of dissenting voices and complaints about Islam. Why is that?

Muslim leaders often choose to complain about Islamophobia. For example, in her Sternberg lecture, Baroness Warsi mentioned Islamophobia 14 times. While that speech does not contain a definition, the most widely accepted definition is from the Runnymede Trust’s Commission on British Muslims and Islamophobia which published a report in 1997 called “Islamophobia: A Challenge for Us All.”

Explaining the word Islamophobia, page one of the report says “The word is not ideal, but is recognisably similar to ‘xenophobia’ and ‘europhobia’, and is a useful shorthand way of referring to dread or hatred of Islam – and, therefore, to fear or dislike of all or most Muslims.”

It is worth reading the full report, but even the short quotation above shows two distinct issues being conflated:

This conflation is of course nonsense. I celebrate my Roman Catholic compatriots and believe they will be excellent citizens if they follow the teachings of their Church, but as a Muslim I regard Roman Catholic theology as completely incorrect and invalid on each point where it differs from my understanding of Islam. While it may often be the case that people who hate Islam also dislike most Muslims, the one does not necessarily follow from the other. The use of the word “therefore” is sheer intellectual laziness. Such woolly thinking bedevils the entire report.

In her speech, Baroness Warsi quotes Polly Toynbee “I am an Islamophobe, and proud of it” and Rod Liddle “Islamophobia? Count me in” but does not ask what they had in mind when they made those statements. I for one do not believe that either Polly Toynbee or Rod Liddle hates me because I am a Muslim. (I have no idea whether they might hate me for any other reason!)

Accordingly both of them must have had something else in mind, and I assume they were sharing their views about Islam. While I would like each of them to have a more positive view of Islam, I do not assume that their being negative about Islam means that they wish to deny me my rights as a citizen, or even that they dislike me as a person, especially since I have never met either of them.

The folly of complaining about Islamophobia

As mentioned above, there are a few people who do wish to deny Muslims the rights that other citizens take for granted, including people who engage in unprovoked violent attacks upon Muslims. However when Muslim leaders then complain about Islamophobia, such individuals (if they can string a sentence together) defend themselves with the response that when criticising Islam they are only exercising their right to free speech. Immediately the issue shifts from bigots denying Muslims their civil rights to a debate about the right to say hostile things about an abstract noun. In the ensuing argument about freedom of speech, the original violation of the rights of specific individuals gets forgotten.

Accordingly, Muslims need to keep it concrete. What is wrong is Muslims being denied their rights as citizens, as listed at the beginning, and that is all that Muslims should ever complain about.

I do not want other people to slag off Islam, any more than I want to see them slagging off Judaism, Christianity, Hinduism or any other religion. However, if they wish to do so, they have every right in a free society to be as trenchant as they wish about Islam. What people are not free to do is deny me the rights listed above. That distinction needs to be understood by every Muslim (and indeed non-Muslim) citizen.

It would help if we stopped using term Islamophobia. “Anti-Muslim violence” and “anti-Muslim hatred” are much clearer, and focus the issue properly on the rights of individual citizens.

There were a large number of comments from Conservative Home readers. They have since been deleted as part of the site's housekeeping.

The comments demonstrated the extent of the communications exercise that is needed by the British Muslim community. As explained above, the message from Muslims will be far more effective if it is conveyed in an inclusive manner. 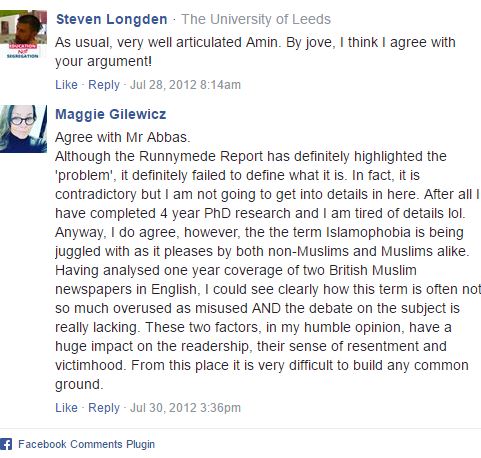