On the page "Writing to the media and politicians" I explained the importance of writing if you are aggrieved by something. It can be far more effective than many think. In a free society such as the United Kingdom, none of us need to fear taking such action.

On 27 January 2012 I wrote to the Superintendent of the United States Military Academy at West Point. The point at issue is explained in more detail on the CAIR website. The Superintendent’s page on the West Point website has a link where you can email him if you wish to write on this or any other issue.

On 31 January 2012 the Guardian newspaper website reported that retired Lt. Gen. William G. Boykin had withdrawn from the prayer breakfast. On the same day I received the following reply to my email:

Sir
LTG(R) Boykin will not be speaking at the academy.  Thank you for your concern.

The email is not confidential so I have shared it on this page. The structure of the email follows the advice on my page "Writing to the media and politicians" but I thought it might be helpful to explain in more detail some of my specific thought processes while composing the email.

Accordingly I have reproduced the email below and then annotated the text using Roman italics.

I am a British citizen living in London and have visited the USA on many occasions. If you wish to know more about me, please take a look at the “About me” page of my website which is linked below.

The communication needs to be very polite. Courtesy required me to identify myself and the fact that I am not American; I believe it helps to refer to my connections with the USA. Similarly it demonstrates confidence to be very open about my identity; hence the reference to the "About me" page.

As someone who follows public affairs closely, I subscribe to the mailing list of CAIR, the Council on American Islamic Relations. I understand from CAIR that retired Lieutenant General William G. "Jerry" Boykin is scheduled to speak on February 8 at a West Point prayer breakfast.

The recipient is entitled to know why, as someone living in the UK, I know about this issue.

From reading the press I am aware that General Boykin holds some peculiar views about Islam and Muslims. It is important not to make the language too strong. Hence I use the word "peculiar" to describe the views rather than words such as "offensive." As the later part of the email shows, I do not write about any hurt feeling that I might have but about the possible damage to the USA. In particular, It is important to give specifics concisely. he denies that Muslims worship the same God as Christians, and also believes that Muslims in America do not deserve the same constitutional protections as adherents of other religions. As a private citizen in a free country, General Boykin is of course free to hold those views and to seek to propagate them. This makes it clear that I am not seeking to limit General Boykin's right to free speech, something the recipient of the email would take very seriously.

However there is no obligation on the US Military Academy to give him the veneer of respectability. This sentence is a freestanding paragraph to emphasise it.

Regardless of how little he says during the prayer breakfast, the fact of him being honoured in this way will be seen by America’s enemies as an example of the US armed forces denigrating Islam. That is not in the American national interest, and also weakens the position of people such as myself who describe themselves as friends of the USA. These sentences focus on the harm to the USA, not on any upset to me or the American Muslim community. (You can read my published views on 9/11 at https://www.mohammedamin.com/Community_issues/Reflections-on-9-11.html ) This sentence provides a concrete example of my claim to be a friend of the USA. While I do not expect the prayer breakfast to receive much mainstream media coverage, Written to anticipate any argument that this matter is "a storm in a teacup." you can be confident that America’s enemies will do everything possible to spread the fact of his having spoken there, and to spread any anti-Muslim comments he might make as further evidence that “America is at war with Islam”, something that President Bush and President Obama have taken great pains to disavow. The reference to President Bush is important because many Americans se President Obama as being "pro-Muslim." His participation is directly contrary to the USA’s public diplomacy interests. Another reiteration of the harm to the USA.

Accordingly I am writing to request that you disinvite him, Making it clear exactly what action I would like the recipient to take. as he is someone who is not an acceptable person to speak on any platform provided by any part of the US Government, regardless of subject.

Mohammed Amin MA FCA AMCT CTA(Fellow)
My website www.mohammedamin.com contains a personal profile and a collection of my writings. If you would like to be sent an email whenever I add a new page to my website, please let me know.

Each of us changes the world every day. We can choose to make it a better place. 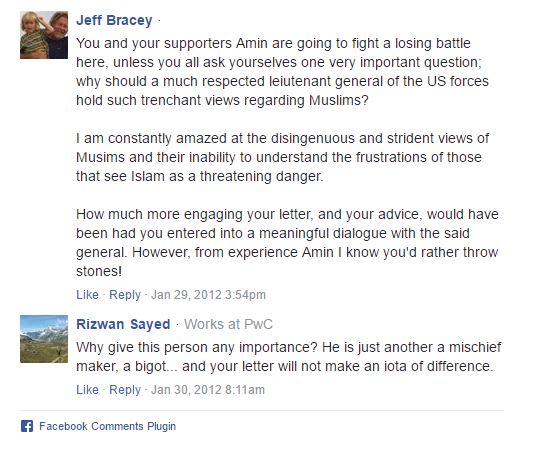