Despite having been an active debater at secondary school, in all three years of my time at Cambridge, even though I was a member of the Cambridge Union Society and attended many debates, I was always too shy to speak, either as a lead speaker or even from the floor.

However, I have taken part in a few formal university debates in recent years at Durham and Exeter. (Durham is particularly formal as the speakers and the Durham Union Society's officers wear black tie!) See the pages linked below.

Why freedom of speech is vital

On 17 January I returned to Durham Union Society to debate the proposition “This House Believes Class Governs Britain.”

Below I have reproduced the speakers' page from the Durham Union Society term card with the Society's permission. 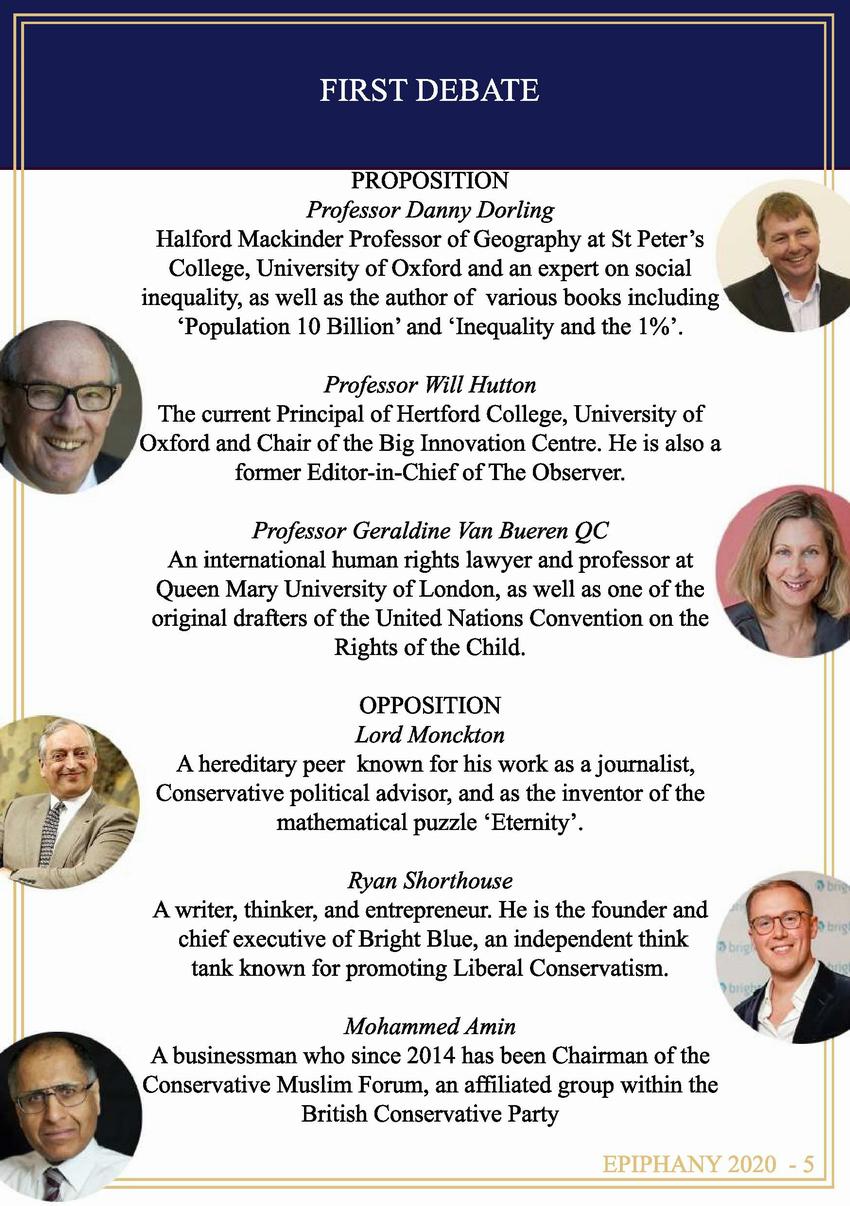 How to approach the question

The subject is an important one.

Nobody can seriously deny that upper class birth is an enormous advantage in our society, and if that is what the proposition means, it must win. Accordingly, that is how all three speakers for the motion chose to interpret in, and they won the debate by a roughly 2/3 majority.

I don’t have their speeches. The event was recorded, and it is possible that it may eventually appear in the Durham Union Society’s YouTube Channel, but is not there at the time of writing.

Conversely to stand any chance of winning, I chose to read the question slightly differently, interpreting it as meaning that the class you are born into locks you into a particular life outcome.

You can read my speaking text below.

I have written many times about the importance of being precise with language.

Many of the issues that people argue about in society cease to be contentious once we are precise about exactly what we mean. A good example is the currently heated debate around issues concerning sex and gender.

In a debate, both sides want to win. Hence the attempts to interpret the question in different ways during the debate. However I am sure that once we agreed which of the alternative interpretations of the question we were applying, the speakers would then vote 6-0.

Advance text of my speech

Tonight’s motion is: “This House believes that class governs Britain.” What does that mean?

Does it mean that every member of the set of people who governs Britain today, is a member, today, of a high class? If so, the motion is obviously true.

Look at Members of Parliament. Collectively they have power. A Prime Minister with a big majority in Parliament can do almost anything. Their salary alone puts every MP into the top 5% of income earners. Almost all MPs are well educated. I say almost all MPs are well educated because there are rare exceptions. For example, the MP for Islington North!

What about the judges who might restrain the MPs, namely the Supreme Court? Or what about the top brass of the armed forces? By the standards of the average person, all of them are exceptionally well paid, superbly well educated, and very well spoken. The same goes for the Mayor of London, the Mayor of Birmingham, the Mayor of Greater Manchester.

The same is even true of someone far less important. Namely, yours truly. In the political world, I am the equivalent of a Z list political celebrity! The media call upon me when they cannot get anyone more important to speak! I am happy to disclose that I am in the top 1% of income earners, and the top 1% of wealth owners. I graduated from a university which I think is even better than Durham!

So, if the motion means that the set of people who govern Britain today are members of a high class today, let us all agree on that. We can finish the debate right now; and go for a drink.

You can also read the motion another way. But this other way is also something that we can also all agree on.

But I think the motion is asserting something stronger than that. “This House believes that class governs Britain.” I read these words as saying that where you start in life decides where you end up.

That is patently false. However you define class, a small grocer in Grantham, Lincolnshire is nothing like top class. Whether you love her or hate her, a daughter born into that grocer’s family dominated our country’s politics for a decade as Prime Minister.

The man who followed her as Prime Minister had parents who were hard up. He left school at 16 to start work. He started pretty low class, and finished at the top.

A desperately poor, illiterate, Pakistani manual worker was as low class as you can get. His son is the Z list politician before you today.

If the motion is asserting that the class you are born into determines where you end up, then it is obviously false. It must fail.

I will give the rest of my time to my fellow speakers.