This coffee table book can be read inside an hour. It is very well presented, and will both inform you and move you.

If we are to see ourselves accurately today, we need to understand the whole of the past, rather than suffering from selective vision.

World War I was a monumental human catastrophe. It also transformed the shape of Europe immediately, and in the long run the shape of the world with the eventual disintegration of the colonial empires that had dominated the previous century.

A selective vision which narrows our understanding of World War 1 to a simple story of British "Tommies" fighting German "Huns" on the Western front airbrushes out the many peoples who were fighting all around Europe, and in Africa, and in the Middle East.

One story which is particularly forgotten is the large numbers of Muslims who fought for Britain, France, and Russia. Over the last few years the facts (which are well established by the military archives) have started to become better known. My own awareness began with the Muslim Council of Britain's publication in 2009 “Remembering the Brave: The Muslim contribution to Britain’s Armed Forces.”

In 2014, I went with a group of colleagues from The Muslim Jewish Forum of Greater Manchester to Paris. The Forum’s account of that visit says:

“On Saturday the group visited the Grande Mosquée de Paris. This beautiful landmark building was constructed in 1926 with the assistance of the French government to recognise the sacrifice of over 100,000 Muslims who had died fighting for France in World War I and was opened by the President of France Gaston Doumergue.”

This illustrates how the French state in the 1920s was very much aware of the contribution that Muslims had made to its survival in World War I. Sadly, much of that has been forgotten both by French Christians and by France’s growing Muslim population.

In 2015 at a dinner, I sat next to Luc Ferier, Chairman & Founder, Forgotten Heroes 14-19 Foundation, and have stayed in touch with him electronically ever since. He was passionate about remembering the Muslim contribution in World War I and I am delighted that his efforts have resulted in the publication of this book which I bought and read recently. 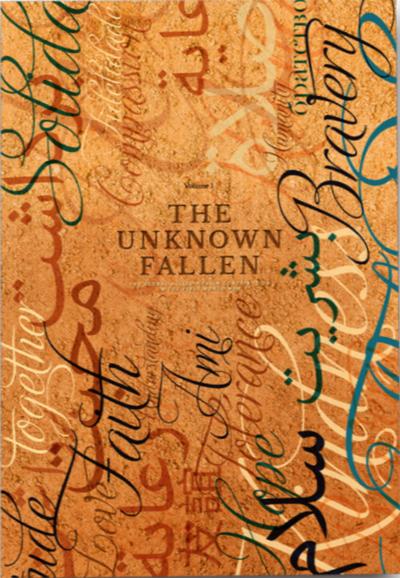 This book is designed as a “coffee table book” measuring 28 cm x 38 cm. However it is relatively short, 106 pages, mostly consisting of photographs, paintings and some text, and I was able to read it in one session.

Apart from a few statistics, it focuses on the human stories, and is well illustrated with maps, photographs, paintings, facsimile reproductions etc.

Many of the paintings and texts associated with them come from the work of Eugène Burnand (1850-1921) whose final project was a series of 104 pastel portraits of allied WW1 participants of all nationalities that was incomplete when he died.

One of the best features of the book is that the geographical coverage is very wide. We learn about the contribution of Muslims not just from the Indian subcontinent, but many parts of the Middle East, Africa, South East Asia and even China.

The book also contains some modern poetry and other contributions including a 28-point letter issued in 2014 by over 100 Muslim scholars about the obligations of Islam which was sent to the leader of ISIS, Abu Bakr al-Baghdadi, to rebuke him. (I have of course seen this before.)

My comments on the book

The book is very well presented, absorbing, and easy to read.

It is also very moving. I confess that on two occasions I was reduced to tears.

One was reading a letter by the French war minister Alexandre Millerand giving instructions to be followed for the burial of Muslim soldiers. A facsimile of the original letter in French is included along with an English translation. The care and concern set out in his letter was immensely moving, and reminded me of the Muslim burials I have participated in, including those of my parents.

The other occasion was reading two verses from “The Fallen” by Laurence Binyon, words that I have heard so many times before, but given extra vividness by the detailed stories in this book. As printed in the book:

“They shall grow not old, as we that are left grow old:
Age shall not weary them, nor the years contemn.
At the going down of the sun and in the morning
We will remember them.

They went with songs to the battle, they were young,
Straight of limb, true of eye, steady and aglow.
They were staunch to the end against odds uncounted;
They fell with their faces to the foe.”

When I was a teenager, the organ in my school had a plaque remembering old boys of the school who had died in World War 1 and World War 2. At Clare College, in my first year I lived in Memorial Court which was built after World War 1 and designed as a memorial to Clare men who had fallen in that war.

The book contains much information I had not seen before. For example, 6,000 Muslims were amongst the American troops that fought in World War 1.

I believe that everyone in the UK, and anywhere else who speaks English, would benefit from reading this book.

Helping to spread the message

You can buy the book online for £49.50 post free in the UK. My copy arrived extremely well packaged. You can also buy it in person at two locations given on the Foundation’s website:

You can also make a donation online (or offline) to the Forgotten Heroes 14-19 Foundation to help them to get the book into public libraries and schools. At present, the Foundation does not appear to be registered as a charity, so no higher rate tax relief will be available. Nevertheless, I have donated £500 which will allow 10 books to be distributed.

There is a 2-minute video introducing the book which I have embedded below.