I bought this book because I met the author at the 2011 national commemoration of Holocaust Memorial Day. Agnes Grunwald-Spier is herself a Holocaust survivor and her book begins:

One morning in Budapest, during the autumn of 1944, an unknown official in charge of deporting Hungarian Jews to Auschwitz sent all the women accompanied by children back to their homes. My mother, Leona Grunwald, was one of those women – and I was a tiny baby in her arms.

I have no means of knowing who that official was and what his motives were for what he did. I cannot know his name or his fate, but it is chilling to think that but for his actions, on arrival at Auschwitz I would have been tossed into the fires with other babies – murdered before I was aware of life. His actions helped both of us to survive the Holocaust.

The industrialised scale, duration and geographical extent of the Holocaust make it uniquely monstrous. Sadly however it is not the only modern example of genocide. In every genocide there are the innocent victims, the active perpetrators, those who stand idly by and those who seek to assist the victims. Unless the circumstances arise, none of us can know what we would do.

During the Holocaust to hide a Jew meant risking not only your own life. In the event of discovery the Nazis would kill not just you and the Jew, but also your wife and children. There are countless anonymous heroes, failed rescuers, about whom we will always know nothing because the Nazis liquidated them along with their families so that no one lived to tell their tale. They will receive their reward from God on the Day of Judgement.

Yad Vashem, the Jewish people's living memorial to the Holocaust, has a formal process for designating gentiles who helped Jews during the Holocaust as "Righteous among the Nations." (The booklet "The Role of Righteous Muslims" tells the stories of some Muslim rescuers.)The stories of rescuers told in this book are based upon original research carried out by the author with rescuers, survivors and in many cases their descendants.

The book contains many moving stories but I have selected just four. 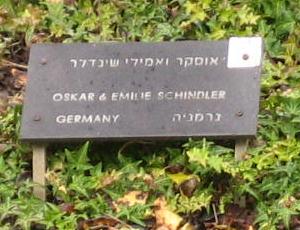 Plaque for Oskar Schindler and his wife in the Garden of the Righteous at Yad Vashem, photographed by Mohammed Amin in January 2010.

Thanks to the book "Schindler's Ark" by Thomas Keneally and the film "Schindler's List" by Steven Spielberg, Oskar Schindler has become the most famous rescuer of all. The book devotes almost seven pages to him.

Before the war, Schindler was known in his hometown as a swindler. After the war he was an alcoholic and every business venture he tried failed. He was cruel to his wife, a womaniser and a failure at everything he did; except during the war. However during the Holocaust he ran his factory with great skill and only one purpose; to deceive the Nazis and to save the lives of 1,100 Jews. That one action made everything else about his life irrelevant. The chance discovery of his story by Thomas Keneally has brought him unimaginable posthumous fame.

In May 1938 at the age of 37 Dr Feng Shan Ho was appointed as the Chinese Consul General in Vienna. He was a career member of the Chinese diplomatic service.

Vicious persecution after the Anschluss with Germany meant many Austrian Jews were desperate to leave the country. At that time Germany was still permitting Jews to leave provided they had evidence that another country was willing to take them in, but no country would. Dr Ho began issuing visas to Shanghai. China did not actually require such a document to enter the country but it would mean that the Germans would let the individual out and also meant that countries such as Britain and Italy would issue a transit visa as the individual had proof of a final destination.

Dr Ho's conduct caused concern to his government. At that time the Nationalist Chinese government led by Chiang Kai-shek wanted to maintain good diplomatic relations with Nazi Germany. The Chinese ambassador in Berlin, Dr Ho's superior, ordered him to stop issuing visas. Dr Ho disobeyed and continued issuing visas for two years at the rate of about 500 per month. While the full statistics are not known, it is estimated that he saved over 12,000 Jews.

Dr Ho was censured by his superiors and transferred back to China in 1940. In 1947 he became ambassador to Egypt's and other Middle Eastern countries for nine years and also served in Mexico, Bolivia and Colombia. He retired in 1973 but the Chinese government denied him a pension and he lived the rest of his life in poverty. He was recognised by Yad Vashem posthumously in July 2000.

Varian Fry's story is the source of the author’s interest in rescuers; she wrote a dissertation on him for her MA in Holocaust Studies at Sheffield University (1996 – 1998). In June 1940 he volunteered to go to Vichy France on behalf of the American Emergency Rescue Committee. He was meant to use visas obtained by Eleanor Roosevelt, the wife of the president, to rescue 200 artists and writers on a list produced by the ERC. (The USA was not willing to open its doors to all Jewish refugees but was willing to take in some intellectuals.) He ended up saving about 4,000.

The Wikipedia page for Varian Fry lists some of the people he helped rescue. The names of the famous artists and writers rescued are a sobering reminder of the countless others who died at the hands of the Nazis. In 1996, nearly 30 years after his death, he was the first American to be recognised as Righteous.

Many of those who died in the Holocaust were not killed by the Germans; they were killed by their fellow citizens in Eastern European countries such as Lithuania. On 27 June 1941 50 Jewish men were rounded up in Kovno, Lithuania and beaten to death by Lithuanian citizens. One of those killed was the father of a girl called Margaret Kagan who had been born in July 1924. All of the Jews of Kovno were rounded up and forced into the ghetto in the old Jewish quarter. In October 1943 Margaret, her husband Joseph Kagan and her mother were hidden in the loft of a foundry by the manager with the concurrence of the bookkeeper and the foundry foreman Vytautas Rinkevicius. They were in hiding for 300 days, totally dependent upon Vytautas to bring them food, dispose of their personal waste and to tell them when it was safe to move around.

After the war Margaret Kagan and her husband moved to the UK. He eventually owned Gannex,  maker of the raincoats worn by Prime Minister Harold Wilson, and was ennobled as Lord Kagan.

The story of Vytautas Rinkevicius is the story of many "ordinary" heroes who risked their lives to save others driven by nothing other than their common humanity. He was recognised as Righteous during his lifetime in 1976.

The book is quite short, 220 pages including the index. Apart from being very readable, it is well documented and structured.

Appendix 1 gives details about Yad Vashem and the award of "Righteous among the Nations."

There is a full set of endnotes and a bibliography and index.

The Holocaust was a time of unimaginable horror. For a variety of reasons most people chose to be bystanders while a few endangered themselves and their families in order to save the lives of their fellow human beings. The author has told the stories of some of them extremely well and also summarised her thoughts on the way that people make their choices. Despite the subject, it is not a gloomy book to read and I would recommend it to everyone.

The above review is of the original hardcover edition. There is now a paperback edition linked below which contains a Postscript updating several of the stories with new information.