My favourite taxes are the taxes that other people pay, and that I don't pay. These include:

I have long supported increasing these taxes, even beyond the point where the total tax revenue raised starts to diminish, because I want the state to discourage such behaviours. However I do not want to ban the activities themselves, because that does not work, as demonstrated by the experience of prohibition in the USA. Also I recognise that if one raises tobacco duty and alcohol duty "too far" one gets increased smuggling.

Despite my enthusiasm for tobacco duty, I have always felt that smokers get a raw deal. While anti-smoking campaigners are quick to point out the extra costs that smokers cause the National Health Service, they always seem to ignore the saving to taxpayers from smokers dying younger and therefore not collecting as much state pension as non-smokers collect.

I received this short (50 pages excluding endnotes) booklet published by the Adam Smith Institute in 2012 when it was published. However I only got round to reading it recently. I was pleased by the clarity of its analysis.

Overview of the booklet 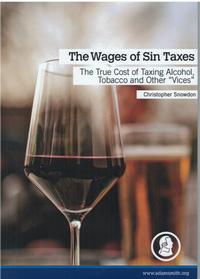 It has six sections:

The booklet is short and available free at this link or by clicking the image of the cover. I encourage everyone to read it to become better informed, and have reproduced some short snippets below.

The Executive Summary tells you the booklet's conclusions in two pages. I have copied the two key paragraphs below:

3. It is frequently claimed that consumers of ‘unhealthy’ products place an excessive burden on public services— healthcare, in particular—and that this justifies additional taxation in order to (a) reduce consumption of the sinful product, and (b) reimburse the state for the extra money it is forced to spend. This is not true. There is ample evidence that, on average, smokers and the obese are less of a ‘drain on public services’ than non-smokers and the slim because they spend fewer years withdrawing pensions, prescriptions, nursing home provision and other benefits. Their lifetime healthcare costs are usually lower than those who lead ‘healthy lives’. If making consumers pay their way is truly the aim of public policy, the government would be more justified in placing a tax on fruit and vegetables.

4. The case of alcohol differs from that of tobacco and ‘unhealthy’ food in so far as there are additional externalities relating to violence, drink-driving and property damage. It is likely that drinking and drunkenness result in additional costs to the public purse which are not offset by savings and benefits, but these are covered by existing alcohol taxes with several billion pounds to spare. Just as smokers are subsidising non-smokers, so drinkers are subsidising teetotallers.

The author points out how eager most governments are to raise tax revenue, and how attractive such taxes are as a form of revenue raising. He then leads into the booklet's fundamental proposition:

Having acknowledged the government’s appetite for revenue, is it also true that sin taxes serve a higher purpose? Two arguments are made in their favour:

The first is that unhealthy habits place an economic burden on those who abstain and that this cost should be borne by the sinner. To do otherwise forces the abstainer to subsidise the lifestyles of others.

The second is that certain habits are morally and/or physically damaging to those who practise them. If we accept that the state has a duty to encourage its citizens to live healthy and/or moral lives, this objective can be achieved by making undesirable habits more expensive.

This paper will take both of these arguments in turn.

The price of vice

This chapter looks in detail at the "negative externalities" argument - that sinners (smokers, drinkers, gamblers) impose costs on the rest of us which must be paid for by higher taxes on the sinful activities (smoking, drinking, gambling).

It provides a useful review of some of the academic findings. The conclusions are striking:

These are only the healthcare savings. Other studies have found savings in nursing care provision, social housing and pensions. For example, one Canadian study found that: “In the pension area alone, non-smokers benefit from a transfer of $1.4 billion mainly because smokers tend to die before non-smokers do”. As early as 1971, the British government had calculated that a 40 per cent decline in smoking prevalence would lead to a £39 million increase in social security payments. Sloan et al. came to a similar conclusion in their study of the USA:

Smokers, due to higher mortality rates, obtained lower lifetime benefits compared to never smokers, even after accounting for their smoking-related lower lifetime contributions... It is evident from our analysis that the negative externalities to Social Security contributions from smokers are more than offset by the net losses incurred by smokers due to their reduced benefit receipt.

This is for your own good

Once it is recognised that the "negative externalities on the rest of society" argument is factually incorrect, the only remaining justification for sin taxes is that they are for the sinners own good.

I am a libertarian and believe that in general adults should be able to make their own decisions unencumbered by the state. If a person wishes to smoke and thereby shorten his life, what business is that of mine as long as the person is not imposing additional costs on me?

As a friend I may well preach to him about the benefits of giving up smoking, making himself healthier and increasing his chances of living longer. Indeed about a decade ago I promised to donate £1,000 to the charity of his choice if one of my partners at PwC went without smoking for a year. He did, giving up completely, and I was happy to donate the promised £1,000 to the charity of his choice.

However such encouragement is different from coercion (in the form of bans), and also philosophically different from charging additional taxation on activities of which we disapprove.

The author points out that sin taxes are regressive, which means that they bear disproportionately on the poor.

If the aim of sin taxes is to encourage abstinence, targeting inelastic goods invariably results in more misses than hits, and significant collateral damage. In the earlier example of a 10 per cent price hike on cigarettes, the 2.3 per cent of smokers who quit should benefit from better health, but the 97.7 per cent will experience only greater impoverishment. This should be of concern to policy-makers because smokers, like the obese, are disproportionately drawn from low income groups.

All of this is extraordinarily regressive by any standard, and yet politicians of all colours remain monastically silent on the issue. Their response is essentially that the poor shouldn’t smoke and should cut down on their drinking. Gone are the days of politicians seeking re-election on a ticket of taking a penny off a pint of beer. Reformers are never likely to fret about ‘beer poverty’ in the same way as they worry about ‘fuel poverty’. Although it is well known that indirect taxation is regressive, governments have increased taxes on widely used commodities for decades.

As the Office for National Statistics notes, indirect taxes “take a higher proportion of income from lower income households, and therefore increase income inequality.” In the UK, direct taxes take 24 per cent from the richest and 10 per cent from the poorest, but the figures are almost exactly reversed when it comes to indirect taxes such as fuel duty, tobacco duty, VAT and alcohol duty.

Sin taxes are doubly regressive because they tend to target products which are disproportionately consumed by the poor. Those who campaign for the minimum pricing of alcohol — a sin tax by any other name — explicitly target drinks consumed by the poor and homeless while assuring the middle-class that their chardonnay will go untouched. The healthist agenda, enshrined on the Left in the rhetoric of ‘health inequalities’, is so dominant that it can overwhelm traditional concerns about poverty and inequality.

I found the analysis in the booklet compelling. In particular I was pleased that the hard evidence supports my intuitive expectation that smokers cost the rest of us less because the pension savings from their early deaths outweighs the additional healthcare costs smokers impose. What my intuition had ignored was the further point that even "healthy people" give rise to health care costs; they just do so later in life since they live longer.

Accordingly I am persuaded that there is no moral argument for sin taxes arising from negative externalities imposed on the rest of us. As a libertarian, I have never believed in coercing others for "their own good."

Accordingly I accept the book's arguments against sin taxes. However it will not change my political behaviour, for the simple reason that if we reduce taxes on alcohol, tobacco and gambling the revenue has to be raised from elsewhere, and that would almost certainly mean a tax increase for me personally!