Leopold Weiss was born in 1900 in Lwow, Poland which at that time was an Austrian possession. His father was a lawyer, descended from a long line of rabbis. His mother, also Jewish, was the daughter of a banker. She died when he was about 19. Leopold's father and sister perished during the Holocaust.

Leople Weiss himself died as Muhammad Asad in 1992 and is buried in Granada, Spain, not far from the Alhambra. Sadly the cemetery was closed on my one opportunity so far to visit his grave. He produced my favourite Quran translation.

This book covers the first 32 years of his remarkable life, explaining how he came to embrace Islam at the age of 26, and detailing his extensive journeys in Arabia, Palestine, Syria, Iraq, Iran, Afghanistan, Egypt and Libya. He wrote it in 1954, shortly after stepping down as Pakistan's ambassador to the United Nations, to explain to the world what had brought him to Islam.

My own Islamic education only began seriously when I performed Hajj in 2002. The tour companion I spent most of my time with recommended the book to me. I purchased it immediately on return to the UK, but was always too busy to open it. My wife read it recently and based on her comments I have also now finished it. The book is rightly a classic, and my only regret is not reading it earlier.

Structurally the book is written as a series of flashbacks during his last 23 day journey to Mecca.

"And here it is: not the story of all my life, but only of the years before I left Arabia for India – those exciting years spent in travels through almost all the countries between the Libyan Desert and the snow-covered peaks of the Pamirs, between the Bosporus and the Arabian Sea. It is told in the context and, it should be kept in mind, on the time level of my last desert journey from the interior of Arabia to Mecca in the late summer of 1932: for it was during those twenty-three days that the pattern of my life became fully apparent to myself."

Asad's first visit to the Middle East was sparked around the age of 22 by his mother's brother inviting him to come and stay for a while in Jerusalem. After that trip, Asad eventually landed himself a job as the roving correspondent of the Frankfurter Zeitung, a newspaper as highly regarded in Central Europe as the Times of London was in the English speaking world. During his travels, the author had close exposure to a number of historical figures who appear in his book:

The meaning of Islam

The book is far more than an account of Asad's travels in the Middle East. Throughout he reflects upon the meaning of Islam. That is why the book engages the modern reader despite being set almost 90 years ago. I will restrict myself to just one quotation where the author explains the revolutionary message of the Prophet (peace be upon him):

"He began by telling people that action is part of faith: for God is not merely concerned with a person’s beliefs but also with his or her doings – especially such doings as affect other people besides oneself. He preached, with the most flaming imagery that God had put at his disposal, against the oppression of the weak by the strong. He propounded the unheard-of thesis that men and women were equal before God and that all religious duties and hopes applied to both alike; he even went so far as to declare, to the horror of all right-minded pagan Meccans, that a woman was a person in her own right, and not merely by virtue of her relationship with men as mother, sister, wife or daughter, and that, therefore, she was entitled to own property, to do business on her own and to dispose of her own person in marriage! He condemned all games of chance and all forms of intoxicants, for in the words of the Koran, great evil and some advantage is in them, but the evil is greater than the advantage. To top it all, he stood up against the traditional exploitation of man by man; against profits from interest-bearing loans, whatever the rate of interest; against private monopolies and ‘corners’; against gambling on other people's potential needs – a thing we today call ‘speculation’; against judging right or wrong through the lens of tribal group sentiment – in modern parlance, 'nationalism'. Indeed, he denied any moral legitimacy to tribal feelings and considerations. In his eyes, the only legitimate – that is, ethically admissible – motive for communal groupment was not the accident of a common origin, but a people's free, conscious acceptance of a common outlook on life and a common scale of moral values.

In effect, the Prophet insisted on a thorough revision of almost all the social concepts which until then had been regarded as immutable, and thus, as one would say today, he 'brought religion into politics': quite a revolutionary innovation in those times."

I recommend the book to everyone, Muslim or non-Muslim, who wishes to gain an insight into a remarkable human being and into the meaning of Islam. It is also a compelling read. 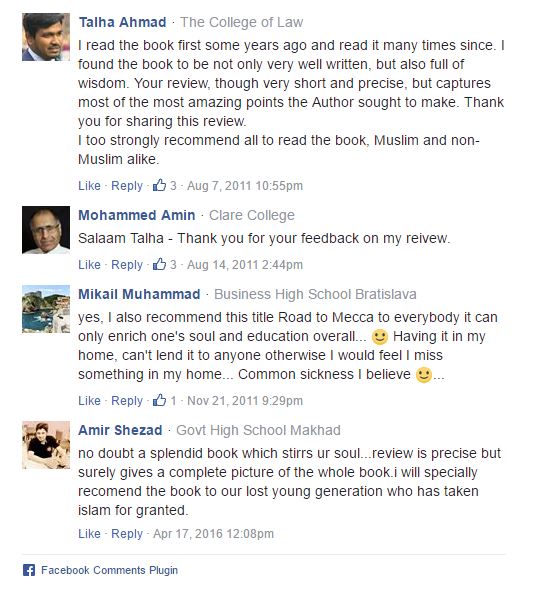