This short paper, only 18 pages of text, should be read by everyone who has any interest in Islam.

Non-Muslims with a short knowledge of history often make disparaging comparisons between Islamic and Western practices in a range of fields. As the author says, when it comes to war:

Among widely held negative views of Islam is a perception (or at least a concern) that, while Western states adhere to the Just War tenets, other states and peoples, particularly Muslims in general and Arabs in particular, have no comparable philosophical framework for guiding ethical behaviour during international disputes and during warfare itself. According to this perception, the Western code of war is based on restraint, chivalry and respect for civilian life, whereas the Islamic Faith contains ideas on war that are more militant, aggressive and tolerant of violence.

Like much else that is written about Islam, the views in the above paragraph are just plain wrong. The author proceeds to systematically analyse what the Quran, which Muslims regard as the direct word of God, actually says about the conduct of warfare. The paper:

… concludes that the Qur’an is unambiguous: Muslims are prohibited from undertaking offensive violence and are compelled, if defensive warfare should become unavoidable, always to act within a code of ethical behaviour that is closely akin to, and compatible with, the Western warrior code embedded within the Just War doctrine.

Dr Hayward systematically goes through the Quranic verses that are often cited by non-Muslims as evidence of Islam’s violent nature. With each one, he explains the context of the verse, something consistently ignored by the critics. He begins by pointing out the key differences between the environments faced by Jesus (peace be upon him - "pbuh") and Muhammad (pbuh):

Jesus was the spiritual leader of a small and intimate group of followers at a time of occupation but relative peace and personal security throughout the land. … his execution by the Rome-governed state… followed several years of him being able to preach throughout the land without severe opposition and with no known violence. By contrast, the Prophet Muhammad … found himself not only the spiritual leader but also the political and legislative leader of a massive community that wanted to be moderate, just and inclusive but suffered bitter organised persecution and warfare from other political entities which were committed to his community’s destruction. His responsibilities (including the sustenance, education, governance and physical protection of tens of thousands of children, men and women) were very different.

The author also points out the double standards of many critics, who complain about the actions of Muhammad (pbuh) while being silent about matters such as the mass slaughter of men, women, children and animals that took place during the Israelites’ conquest of Canaan as documented in the Bible.

Many critics also claim instant expertise in Islam, and are quick to point out that the Quran’s “warlike” verses were revealed later than the “peaceful” verses and therefore replace them, technically known as abrogation (in Arabic “naskh”). This short review is not the place for a detailed explanation of abrogation but the author covers some of the principles in the paper. He also rebuts the critics in the simplest possible way, by pointing to “peaceful” verses that were revealed just as late as the “warlike” verses the critics object to.

The paper can be downloaded free from Joel Hayward's website, and I recommend it to all non-Muslims who want to know what Islam really says about the conduct of warfare. Muslims should also read it, both to arm themselves for dealing with critics, and also to provide a benchmark for evaluating the conduct of groups like Al Qaeda and the Taliban.

There is no better way to conclude this review than to quote again from the paper:

This paper is not an attempt at religious apologetics. It is written by a scholar of military strategy and ethics for a general audience in an endeavour to demonstrate that the world’s second largest religion … includes at its core a set of scriptures that contains a clear and very ethical framework for understanding war and guiding the behaviour of warriors. That framework only supports warfare when it is based on redressing substantial material grievances (especially attack or serious direct persecution), when it occurs after other means of addressing the grievances have been attempted, and when it includes the cessation of hostilities and the restoration of peace as soon as a resolution has been attained. It demands of warriors that they uphold the concepts of proportionality (doing no more harm than is necessary) and discrimination (directing violence only at combatants whilst minimising harm to civilians and their possessions and infrastructure). That framework is very compatible with the Western Just War philosophy …. 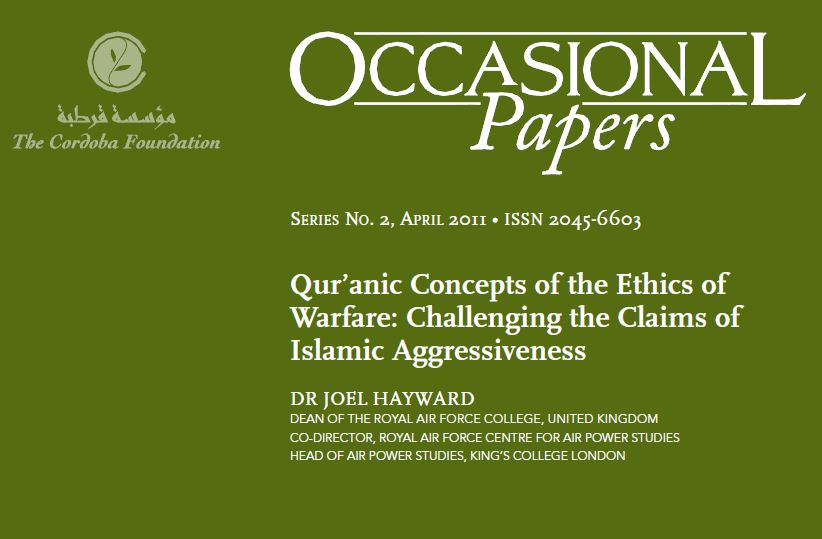 comments powered by Disqus
This page previously used the Facebook comments facility below. It remains active to allow you to read the historic comments which are below. However please do not add any more comments using the Facebook facility. Instead please use the Disqus facility above.