Review of "Edgar Rice Burroughs: The Man Who Created Tarzan" by Irwin Porges

This is the definitive authorised biography of one of the 20th century's most successful authors. It is very easy to read.

When I was young, I regularly watched Tarzan movies on TV and at the local cinema where I used to go every weekend for the Saturday matinée. At the end, the credits would always include something like “Based on the stories of Edgar Rice Burroughs” which is where I first came across that name. 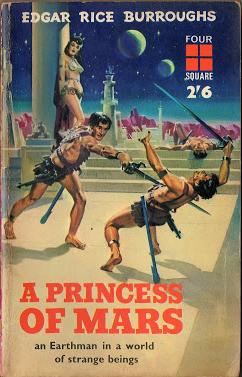 From my primary school years onwards, starting with books like “20,000 Leagues under the Sea” by Jules Verne, I have been an avid reader of science fiction. In my mid-teens, shopping for science fiction paperbacks, I came across “A Princess of Mars” by Edgar Rice Burroughs. It may have been the eye-catching cover, but in any event I recognised the name of the author instantly, and bought it.

The image from the internet matches the cover of my copy. Book prices have increased since around 1965!

Subsequently, I read all of his fiction that I could find, apart from his Tarzan novels where I only bothered reading one. He may be the best represented author in my science fiction collection, with his stories of Mars, Venus, Pellucidar, etc. ERB’s work had no literary pretensions but was always exciting to read.

Around 1976 amongst the remainders in a Manchester bookshop I came across this biography of ERB and bought it immediately. The only problem is that it is big and looked forbidding, so I deferred reading it. The decades went by. Finally, in 2019 during my summer period in Manchester I decided that I must read it, and did so. That set a record for my longest gap ever between buying a book and reading it, 43 years.

Despite its enormous size, it was very easy to read because the print is reasonably large, and there are very many illustrations.

The book contains the following text about the author:

“Irwin Porges – author, historian, musician, and world traveler – grew up in Chicago, where Edgar Rice Burroughs spent so many years. Born in 1909 in Maywood, Illinois, Porges saw his first poems and stories in print when he was 10 years old. He grew up at a time when boys swung from limbs, lassoed fence posts, and screamed strident calls as they fought imaginary apes and lions in imitation of their hero – Tarzan.

The author became a professional musician after his graduation from Lake View High School in Chicago, served in the Air Force during World War II in Africa and Italy, moved to California after his discharge in 1945, and obtained his degrees at the University of Southern California and the University of California at Los Angeles. He taught English, literature, and creative writing at Valley College in Van Nuys, California, for 23 years, meanwhile writing articles, short stories, and books.

At Van Nuys, as in Chicago, Porges was near a Burroughs base of operations, and he sought to penetrate the mystery of Burroughs the man and the writer. Fascinating, Porges became convinced that prior stories about ERB were only exaggerated and contradictory bits and pieces. After one look at the Tarzana, California, warehouse packed with ERB memorabilia, Porges knew that the real Burroughs had not been touched. He then embarked on the project that has resulted in “Edgar Rice Burroughs: The Man Who Created Tarzan.”

The author had two “secret weapons” for writing this colorful and definitive look at ERB. One was his wife, Cele, a gifted researcher, who spent nearly 3 years culling information from the extensive library at Tarzana. The other was unlimited permission to use this library with the full cooperation of Hulbert and Jack Burroughs, sons of ERB. All these factors, along with Porges’ skill in piecing together the massive amount of information and reducing it to usable size, have resulted in this captivating book, the first and only true and definitive account of the life and work of this remarkably successful author.

Porges has published more than 50 articles and stories and has written four other books, including a sociological study, “The Violent Americans,” and a biography, “Edgar Allen Poe, 1809-1849,” now in its second printing.

Overview of the book

One of the things I had not noticed until I started reading the book is that it is published by Brigham Young University Press. Since I got to know the Church of Jesus Christ of Latter-day Saints well, I have learned just how widely BYU University Press is engaged in the dissemination of knowledge. For example, they have published a series of translations of famous Islamic texts such as Ghazali’s “The Incoherence of the Philosophers” which I own but have not yet read.

This book is the ultimate authorised biography of ERB given the extent of access that the author had to his personal papers and also his access to interview ERB’s children and others who knew him. It represents over a decade’s work.

Assessment of the book

As mentioned above, the book is very easy to read.

In the first half of the 20th century, ERB was one of the world’s most successful published writers. As well as the books and serialisations, his work, especially Tarzan, migrated to the cinema where it has had enormous cultural significance. For example, some people still give the nickname “Tarzan” to the Conservative politician Michael Heseltine from the time that he picked up the House of Commons Mace!

Reading it, I acquired a real sense of the author as a human being. Furthermore, it was interesting reading about this middle-class American family from that era. ERB lived from 1875 to 1950, dying in the year that I was born.

I recommend the book to anyone who is familiar with ERB’s fiction. If you are not, then you probably won't want to spend the time to read about his life!