Review of "An Indian in the House: The Lives and Times of the Four Trailblazers Who First Brought India to the British Parliament" by Mohamed Sheikh (Baron Sheikh of Cornhill in the City of London)

Long before today, three Indians were elected to the House of Commons, and one became a life peer and government minister.

For I while I have known that at the tail end of the 19th century and the beginning of the 20th century there were some Indians in the United Kingdom Parliament, unlikely as that may seem.

However, I always deferred finding out more about them. Accordingly, I had great difficulty remembering even the skimpy details I occasionally came across.

After reading this book, I will never forget them. They were awe-inspiring pioneers.

When he was elevated to the House of Lords in 2006, Lord Sheikh became the first Muslim Conservative peer in the modern era. I was introduced to him in June of that year. Since then I have known him continuously through our roles in the Conservative Muslim Forum and more recently The National Muslim War Memorial Trust.

This is Lord Sheikh’s second book. My website already has a review of his first “Emperor of the Five Rivers: The Life and Times of Maharaja Ranjit Singh.”

Overview of the book

The book comprises 327 pages +24 pages of glossary, bibliography and index. It is divided into four self-contained parts, one for each of the individuals involved.

Dadabhai Naoroji was in a sense the pioneer of pioneers. Lord Sheikh writes "He is still remembered and revered, more than a century after his death, as the Grand Old Man of India."

He lost his father at the age of 4, and was brought up as an only child by his mother who never remarried. She was illiterate but encouraged his education. (Just as my parents did.) The book recounts how he first came to England with friends for business reasons at the age of 29, his commitment to the Zoroastrian community, and his concern about how Britain was using its Imperial control to drain India of resources.

Naoroji spoke at the first meeting of the Indian National Congress in 1855, being one of the key figures behind it, and the following year became its President. In the 1892 general election, in his late sixties, he was elected for the Liberal Party in the Finsbury Central constituency, becoming the first Indian ever elected to Parliament.

Mancherjee Bhownaggree, despite also being a Parsi, was a very different person from Naoroiji. He came from a privileged background. Lord Sheikh introduces him as follows:

"Sir Mancherjee Bhownaggree has never been viewed in the same heroic light as Dadabhai Naoroji. He certainly did not achieve the older man’s near sainthood as a champion of India abroad; as a staunch Conservative and a devotee of the Crown, he supported British rule in India and campaigned for his Commons seat on an anti-immigration platform.

Yet at the age of 44 he became his party’s first ethnic minority British MP, and although his reputation was sullied by enemies who persistently attacked him for being, as they saw it, pompous and self-serving, he was a man of passion and conviction who went on to fight for his countrymen’s interests, particularly for the Parsis, consistently and effectively for much of the rest of his life."

Despite the above introduction, his life is interesting to read about.

Shapurji Saklatvala was also born into a privileged family. His mother was the younger sister of Jamsetji Nusserwanji (J.N.) Tata, 1839 – 1904, who was the founder of the Tata Group and is regarded as the legendary "Father of Indian Industry."

As sometimes happens with people from privileged backgrounds, he became a radical and indeed a communist. Coming to the UK, he married a woman he first met in Matlock, Derbyshire. He is one of the few people ever elected to Parliament for the Communist Party, at a time when the Labour Party was willing to allow communists who would adhere to the Labour Party manifesto to stand as Labour Party candidates.

Satyendra Prasanna Sinha was born into a wealthy Hindu family in Raipur, Bengal, making him very different from the three Bombay Parsis listed above.

He was the youngest of four brothers. His father died when he was two years old.

“When Satyendra’s elder brother Narendra, [number 3 amongst the brothers]  attained his majority in 1878, he learned that his father had left on deposit the sum of 10,000 rupees as an inheritance for him – a little over £500 in English money, equivalent to roughly £60,000 today. This enabled him to make a dramatic change in his career plans.”

The two brothers decided to travel to England, Narendra to study medicine and Satyendra to study law. This was a serious rebellious act in religious terms. Lord Sheikh explains:

“There was a formidable cultural obstacle in their way, however, an ancient Hindu prejudice which still prevailed at the time against crossing the kalapani, a Hindu word literally meaning ‘black water’, and referring to the ocean that had to be crossed to reach another land. Those who had crossed the kalapani were considered abased and unclean.”

In the UK, Satyendra was an outstanding student, winning academic prizes and making a great impression on his tutors. He went on to have a distinguished legal career in Calcutta, including service as Advocate-General of Bengal (being the first Indian to hold that post after 19 predecessors) and as the legal member of the Viceroy’s Executive Council, again being the first Indian ever in that role.

He was knighted in 1915, the year in which he also became President of the Indian National Congress, and elevated to the peerage in 1919 as Baron Sinha, of Raipur in the Presidency of Bengal. In 1926, he became the second Indian appointed to the judicial committee of the Privy Council, which serves as the Supreme Court for Britain’s colonies.

While reading the book, I found myself thinking about the extent to which their lives did or did not overlap, so to help readers I have diagrammed their time lines below. 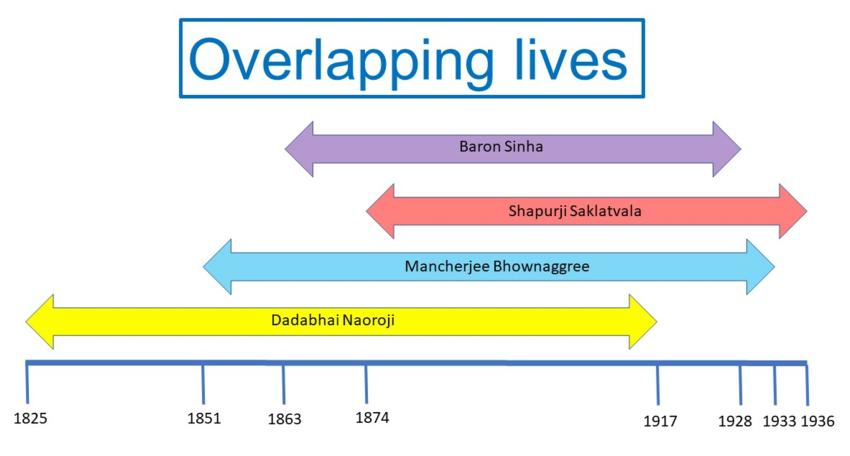 Why the book matters

As a consequence of British imperialism, the histories of India and the United Kingdom have been intertwined for several centuries.

While there has always been a small Indian presence in the UK, this has expanded enormously as a result of immigration subsequent to World War 2. The 2011 Census shows the following ethnicity data for England and Wales:

This is already about 5% of the population. I expect it to be higher when 2021 census data becomes available. The reasons are both further immigration and natural increase, because people of Indian subcontinent descent are much younger on average than White Britons.

People of Indian origin, but also White Britons, should honour the memory of these path-breaking individuals. When you read the details of their lives, you realise just how talented and outstanding they were.

When I read the book, I was struck by the fact that the first three were from the Parsi community and born in Bombay (now Mumbai) or a few miles outside it.

I believe that Parsis had an advantage due to the community encouraging education. Being of originally Iranian descent, they had fairer skin which may have ameliorated the racial discrimination that they would have faced in the UK. Also, the Iranian descent and minority status in India almost certainly gave them a more international outlook and a greater willingness to travel abroad than the majority of India's population.

I was also struck by the fact that two of the four, Naoroji and Sinha, lost their father at an early age. Such early loss often leads to the child having increased motivation to succeed in life.

The above thought led me to look up what age Bhownaggree was when his father died. He was 21. Both of Saklatvala's parents lived well into his majority, but Lord Sheikh recounts that they separated when Saklatvala was young.

Assessment of the book

I found the book easy to read and it successfully brought the characters to life. Both Lord Sheikh not being a professional historian and the constraints of time meant that the book is necessarily based on secondary sources rather than primary ones.

However, as few of us will ever have time to read the books about these individuals which were written from primary sources, that is not a disadvantage.

Reading the book, I formed the impression that it was not overseen by an editor. Otherwise, I suspect that some of the text would have been re-sequenced to make the chronology flow more naturally and to eliminate some of the duplications in the narrative story of each individual.

I strongly recommend the book and am glad that I devoted the time to read it.

The best way to buy the book

Lord Sheikh is donating all the proceeds from the book to St Christopher's Hospice in Sydenham, South East London.

To cut out middlemen such as online book sellers, click the book cover below. You will be taken to the St Christopher's Hospice website, where you can pay St Christopher's for either the paperback or the hardback.

That page will then ask you to email Lord Sheikh at the address on that page, so that you can receive the book through the mail. 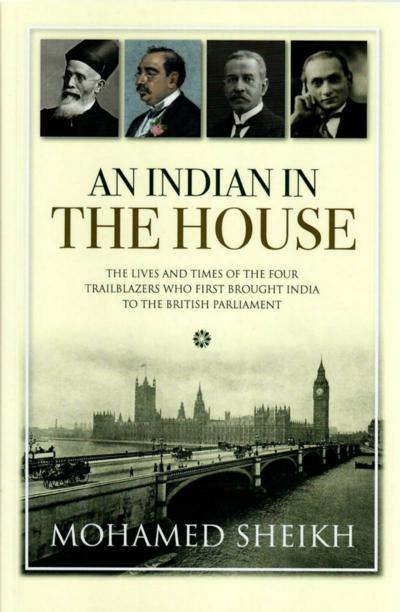