The Islamic Propagation Centre International (IPCI) is a charity based in Birmingham which produces and distributes Islamic literature. I have given them an annual donation for many years.

A few years ago I received and read the PDF of a 24 page booklet whose full title is “Hazrat A’ishah Saddiqah (R.A.A.) – A study of her age at the time of her marriage (based on the researches of Maulana Muhammad Farooq Khan)” by Ruqaiyyah Waris Maqsood. As IPCI grant an open licence to reproduce their material, I have made the PDF available from this page. It is short and very easy to read.

Why the subject matters

The above belief has been used to justify early marriage of children in Muslim societies. For example although memories of what I was told when I was young are rusty, I recall that my mother who was born in British India in the second decade of the twentieth century was legally married at about the age of eight, and began to live with my father when she was about twelve.

Non-Muslims who wish to criticise Islam and denigrate the Prophet contend that it was reprehensible for a man of the Prophet’s age to marry a child. Abusive language is often used by anti-Muslim bigots which I will not repeat here. I regularly encounter this point on social media.

Human nature being what it is, many Muslims who encounter such a challenge cling even more strongly to the above belief, instead of asking themselves how well founded the belief is. It becomes one of these things that “everyone knows” without bothering to ask how they know it.

The conclusions of the booklet

The booklet reviews the available evidence and concludes that Aishah was 16-17 when her nikah took place, and 19 when she began to live with the Prophet.

A summary of the analysis

There is no point in my re-writing what is quite a short booklet, 24 pages, which everyone interested in the subject can read. However I have listed out some key points in the argument.

Some dates in the chronology are universally agreed:

However other aspects are not agreed. Some key pieces of contradictory information are set out in the table below.

The author also cites 17 other pieces of evidence which are consistent with an older age for Aishah than the traditional one. I have listed just three below:

In the absence of a time machine, it is impossible to resolve this question definitively.

All of the available sources are Muslim ones, and taking them all together they contain contradictory information.

Accordingly, whether you believe in the "younger age" or "older age" scenario, you have to reject some of the sources in order to accept some of the others.

My conclusion is that I find the analysis in the booklet quite convincing, and consider the "older age" scenario far more likely to be historically correct.

Apart from anything else, Aishah's status as an Islamic jurist is far more consistent with her spending the years from ages 19-29 living with the Prophet as his wife than spending the years 9-19, when one thinks about how she would have absorbed religious knowledge during the period of marriage in each scenario.

Furthermore, the "younger age" scenario appears inconsistent with everything we know about the personality of the Prophet (pbuh) from the oral accounts of his character and general behaviour. Marrying a young child simply makes no sense against that background.

For a sample, the website WikiIslam describes itself as “the online resource on Islam that anyone can edit.” However it seems to be mostly frequented by those keen to denigrate Islam. It has a great deal of material seeking to reinforce the traditional view. For example “Refutation of Modern Apologetics Against Aisha's Age.”

It is clear that disputes on this issue are essentially unending, even though one is dealing with quite a finite amount of actual information, with no scope for new information to emerge from anywhere.

I encourage people to read the short booklet as an introduction to an alternative view to the traditional one. 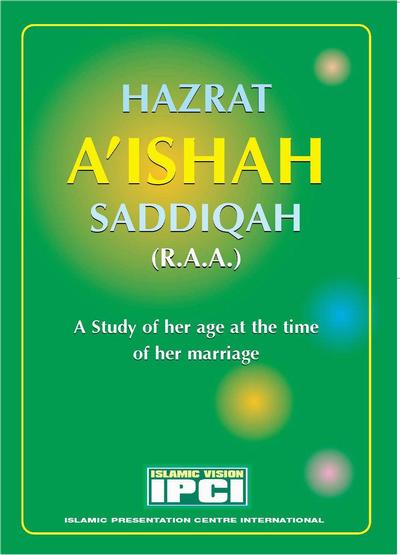 IPCI have published a new booklet "Hazrat Aishah Saddiqah (R.A.A.) - A Study of her age at the time of her Marriage" by Shamshad M. Khan. I do not have an electronic copy of this booklet. However it is just a transcript of Mr Khan being interviewed on Unity FM Radio by Nassar Mahmood.

That interview is available on YouTube and I have embedded it below.