I often emphasise the need for precise language. Without that, we risk confusing others, and also confusing ourselves.

I regularly encounter sloppy, imprecise statements about wealth inequality in society. Having never forgotten a point I saw made in a newspaper about 15 years ago, I decided to reproduce the point for my first article on the Liberal Democrat Voice website, "Discussing inequality requires precise language."

You can read it below.

When mathematicians discuss categories such as groups, rings and fields, they are all agreed about exactly what they discussing. Unfortunately, much political debate today degenerates into a dialogue of the deaf, because we fail to define our terms precisely enough.

This is particularly true with the subject of inequality in society. Let me illustrate.

Country A – an unequal dystopia

This contrasts dramatically with the bottom 50% of the population. They own only 1.5% of total wealth.

Indeed, the bottom 30% of the population own absolutely nothing, while the 1.5% of wealth mentioned in the previous sentence is owned by those in the population range 31% - 50%.

Who could possibly justify such an unequal society? Isn’t Country A is rigged against the poor?

Country B – an egalitarian utopia

In country B, there is no inheritance. Everyone has the same life expectancy.

Everyone attends university until the age of 21, without incurring a penny of debt, and then starts work.

Country B is so equal that every person starting work at age 22 earns exactly the same salary. Each year they get an identical pay rise.

Everyone works until the age of 70 when, they die, and the state takes 100% of their assets because no inheritance is allowed.

This society is so equal that only the most extreme socialists would envisage creating imposing such equality by government edict.

Country A and country B are course the same country.

The reason they sound so different is that we regularly fail to define what we mean by equality.

In particular, very often we talk about inequality without specifying which part of the population we are talking about.

I have modelled this country using some simple assumptions:

I often encounter comments about inequality which fail to even clarify whether children (who of course do not earn in general) are being included in the population denominator.

The most serious error is to talk about equality as if we expected the average 25-year-old to have the same amount of wealth as the average 55-year-old. Such an expectation is completely nonsensical when you think about the relative amounts of time that the 25-year-old and the 55-year-old have had to earn, save, and grow their investments.

One change to the spreadsheet, which would require amending the formulas, is to increase the savings rate as people become older and earn more. In practice, as people’s incomes rise, they can save a higher proportion of their income. In my 20’s, I managed to save very little, but by my mid-50’s I was saving about half of my income each year.

Mohammed Amin left the old Liberal Party to join the Conservative Party. He stayed for 36 years, but joined the Liberal Democrats in October 2019.

A closer look at the mathematics

The reason for building mathematical models is that they help us to think more clearly. In particular, they can dispel preconceptions. On many occasions over the decades, I have been surprised by the way that building a model has helped me to think about something differently.

The simple exercise being considered on this page is no exception.

Since publishing the article on Liberal Democrat Voice, I have modified the original spreadsheet. The revised spreadsheet is available for download.

The revised spreadsheet still contains the original Liberal Democrat Voice calculations. They are on the “Basic” tab on rows 1 – 116.

On the “Basic” tab I have added a two-variable “What if” table. This computes the percentage of total wealth owned by the top 10% of wealthy owners as we change two variables:

An image of part of the table can be seen below. To see the full table, you need to download and open the spreadsheet. 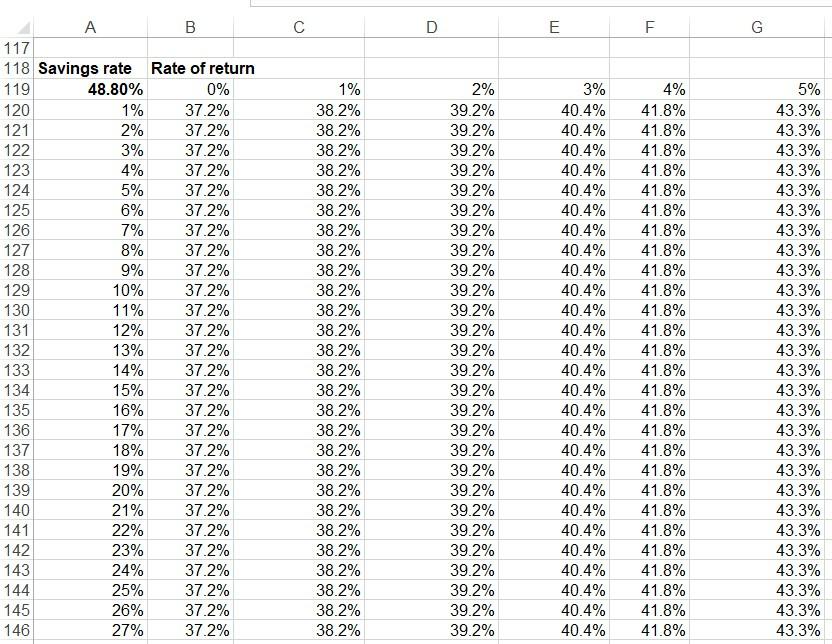 When I saw the results, I was surprised to see that (when everyone saves the same proportion of their income) it makes no difference to wealth inequalities what that rate of savings happens to be. This was counterintuitive since older high earners save much larger amounts of money. This finding illustrates the importance of using mathematical models to test your preconceptions.

The other finding is that, as the rate of return on investment increases, there is greater overall wealth inequality. That result is exactly what I expected. Older wealthier people will have been earning higher rates of return on their wealth for longer periods.

Differential increases in the proportion of income saved

On the spreadsheet tab “Increased savings” I have reproduced the model but built in a steady annual increase in the rate of savings. I chose to increase the rate of savings (initially 10%) by 3.5% each year. This means that in the second year a person saves 10.35%. By the age of 70, people are saving 52.136% of their annual income.

As expected, this does increase wealth inequality. Again however, as with increases in the rate of return on investments, the impact is much less than I had expected. The percentage of total wealth owned by the top 10% only increases to 53.4% from the previous figure of 48.8%.

All of these results illustrate the importance of testing one’s preconceptions with calculations.

I am always conscious of the risk of error when constructing spreadsheets, so if anyone finds a mistake in these calculations, I would be grateful if they could let me know. The “Contact me” page of my website gives you my email address.