Earlier today, I gave my third "Thought for the week" on BBC Radio Manchester. The local government and London mayoral elections were very much on my mind. While politics is often seen as creating disunity, I decided to talk about how voting also unites the country.

Last Thursday, millions of people in all parts of the country voted in local elections. While all of the news coverage has been about who won and who lost, and what this means for politics, I see last Thursday in a different way.

Voting is something that we all do together, in the same way, either by post or in person at a polling station. We all vote on the same day. We all stand in the same queue, with no special line for “First class voters.” The vote of someone unemployed counts just as much as the vote of a billionaire. Election Day probably brings more people together to do the same thing than any other date in our calendar.

We elect people from political parties to represent us on local councils and in Parliament. While the party with a majority gets to govern, the party in opposition is just as loyal to the city or to the country as the party which is governing. That is why the leader of the largest opposition party has the title “The Leader of Her Majesty’s Loyal Opposition.”

This principle, that everyone is loyal, regardless of which party they belong to, lies at the heart of our democracy.

Of course Britain did not invent the idea of democracy. The word comes from ancient Greece, and many countries have had some kind of democratic system in their history.

For example, most Muslims believe that the Prophet Muhammad, peace be upon him, died without naming a successor. Accordingly, after the Prophet died, his companions came together and chose one of their number, Abu Bakr, to lead them as Caliph. This principle of choosing the best person to be the new Caliph continued for a couple of decades before corruption set in and Caliphs started abusing their power to ensure that their son took over after them.

In the week ahead, whenever a politician says something that you think is stupid, just remind yourself of one thing. He or she cares about our country just as much as you do, and is just as loyal to the country as you are. 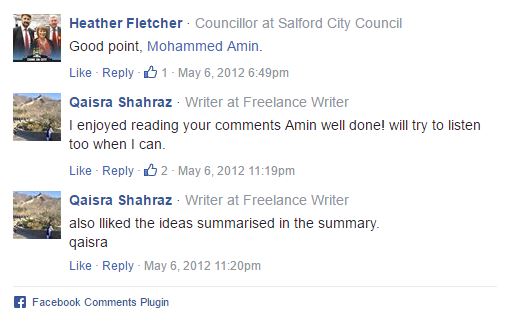