When I was a teenager in school, one of the plays we studied in English literature was "Julius Caesar" by William Shakespeare. I have never forgotten something which is said by Caesar's wife Calpurnia:

When beggars die, there are no comets seen;
The heavens themselves blaze forth the death of princes.

Margaret Thatcher's death on Monday 8 April 2013 was the first item of major news which I learned about via Twitter. My wife and I had spent the morning in London packing and took the 1320 train to Manchester. Just before arriving in Manchester I checked my Twitter feed and saw the news. It was a sad surprise but not totally unexpected given her age and general state of health.

Her death, and reflections on her life, dominated British news for the next fortnight.

That Monday afternoon, I issued a personal tweet to express my sorrow at her passing.

Mourning Baroness Thatcher. I will never forget the speech she gave in Brighton the day after the bombing: "Democracy will prevail."

I then proceeded to write a website page for the Conservative Muslim Forum.

British people had very divergent views about Mrs Thatcher while she was in office. Over 20 years later, views were just as polarised.

At the time of writing on 13 July this tweet had been retweeted 3,202 times. The words on the Conservative Muslim Forum website are just as unambiguous. To quote an extract:

It is hard to remember now the state of our country at the time when Margaret Thatcher became the leader of our Party (the first woman to lead any major British political party) and when she was elected as our country’s first woman Prime Minister. In the most difficult of circumstances, her government’s determination, resolution and innovation transformed our country’s future. She will forever be remembered as the saviour of our country.

Conversely many Britons hated Mrs Thatcher because they disagreed vehemently with her policies in the 1980s; some openly celebrated her death. The polarisation of opinion was displayed again on 10 April and 12 April when the House of Commons and the House of Lords respectively convened to pay tribute to her. It was also shown by the refusal of some prominent people to attend her funeral in St Paul's Cathedral.

My own view on this polarisation

I believe that anyone who displays strong leadership can expect to be strongly disliked by a segment of the population. If you are saying and doing something worthwhile, it is almost inevitable that some people will strongly disagree with you. Indeed, if you say something and everyone agrees with you, have you really said anything worthwhile?

Accordingly, the degree of polarisation over 20 years after Mrs Thatcher left office is testimony to the magnitude of her achievements, and demonstrates just how radical her government was.

Many who paid tribute to Mrs Thatcher expressed deep regret about the way that the Conservative Party unceremoniously dumped her as leader in 1990.

When I met Mrs Thatcher

A few days after Mrs Thatcher's death, PricewaterhouseCoopers sent out a regular email update to its former partners. Amongst other items in the email was a request to hear from any former partners who had met her during her time in politics. I had spoken with her precisely once, so I responded.

My reminiscences were printed in abridged form, along with those of other partners, in the Summer 2013 issue of "Reflections", the PwC magazine for former partners, along with the photograph below. I have reproduced below the full text that I sent to PwC.

My three encounters with Margaret Thatcher

In 1984 I attended the Conservative Party Conference in Brighton all week. As a young and very new member of the party, I knew almost nobody but nevertheless enjoyed the experience of the plenary speeches and the fringe meetings. As someone who had booked relatively late, I was staying in a hotel almost 30 miles away with a short train journey each day to the conference and back.

On the Friday morning, 12 October 1984, I awoke to the news that The Grand Hotel in Brighton had been bombed. I went to the conference as normal and all day there was an atmosphere of quiet grim determination to continue the conference unchanged as an act of defiance against the IRA.

For almost 30 years I have remembered Margaret Thatcher’s ringing declaration at the end of her speech: “Democracy will prevail.” I have just checked the text of the speech at http://www.margaretthatcher.org/document/105763 and my memory has not played tricks on me. Those are indeed the final words of her speech.

In 1986 the British Chess Federation staged the first half of the World Chess Championship match between the defending champion Anatoly Karpov and the challenger Garry Kasparov. At that time I was Finance Director of the BCF. As such, I rated a VIP pass to the event including of course the official opening ceremony on 27 July 1986. The event was opened by the Prime Minister and Margaret Thatcher’s speech is available at http://www.margaretthatcher.org/document/106460.

Various BCF officials such as the President and the International Director were personally introduced to the Prime Minister. As Finance Director I was “just below the cut” but quite philosophical since it was not practical for the BCF to introduce all of its directors along with the other key people such as the players themselves. However I was personally introduced to both players; the only occasion on which I have met the then and the future world chess champion.

After all the speeches were over there was a reception. The dynamics of the way that people arrange themselves at a reception are quite peculiar and I suddenly noticed that Mrs Thatcher was standing by herself with nobody nearer to her than about 6 feet away, being completely ignored. This was the ideal opportunity for me to walk up to her, introduce myself, and tell her what a wonderful prime minister she was and to thank her for opening our event.

Sadly I bottled it. At the age of 35 I was still too shy to go up and talk to the Prime Minister uninvited. That may be hard to believe for those who have only known me in later life!

In subsequent months I kicked myself again and again for wasting the opportunity of a lifetime. However fortune smiled on me. 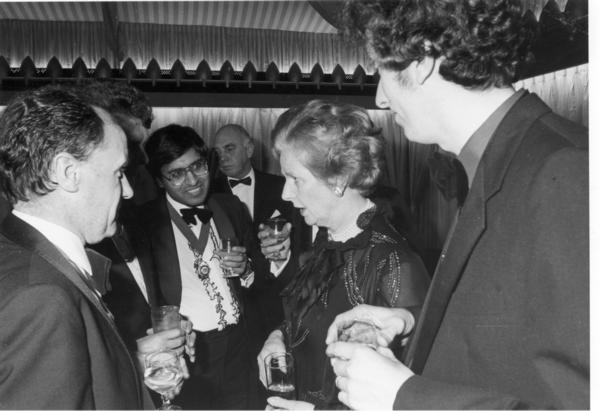 It was only when I got there (obviously for security reasons) that I learned that the principal guest was the Prime Minister. During the VIP drinks reception she was taken around the room and every VIP guest was granted 30 or 40 seconds of conversation with her.

I cannot remember what we talked about. However what struck me was the way in which she radiated personal charm and charisma, not just by her appearance but by the manner and tone of her small talk with me. In person she was completely different from the “battle-axe” that one regularly saw on television.

That experience and my many encounters with national politicians since then have made me realise that the one essential personal quality that all successful politicians have to possess is likeability in person. All politicians need people to help them by donating money, voting for them, agreeing with their policies etc. and personal charm and charisma and likeability are absolutely essential. Even politicians with whom you disagree totally with regard to political issues still come over as personally charming.

At the dinner, Margaret Thatcher made a speech that was very appropriate for the audience, pointing out Manchester’s leadership in the industrial revolution, and how the north-south divide was the opposite way then. The speech is available at http://www.margaretthatcher.org/document/106537