It is well known that the Conservative Party has much lower support amongst ethnic minorities than it does amongst the nation as a whole.

For some years, I have believed that one factor was a type of collective memory, with people from ethnic minorities remembering Enoch Powell and his inflammatory speeches. While they were a long time ago, they linger in folk memory. For example I was recently talking with a relative who was only three when Enoch Powell made his most famous speech, usually called the "Rivers of blood speech" even though that precise phrase does not occur in the speech. My relative recalled the speech very clearly, even though what he was recalling was television repeats of the speech from when he was older, since it is implausible that he could be remembering the original story.

Mohammed Amin is Vice Chairman of the Conservative Muslim Forum. He is writing in a personal capacity.

When I wrote “Winning Muslim Votes” for the Tory Reform Group magazine “Reformer”, I asked why:

“Muslim business owners and professionals who, if they were white Anglo-Saxon Protestants (WASPs) would be expected to vote Conservative but who actually vote Labour despite their wealth and socially conservative attitudes.”

I decided the key reason was a form of collective memory:

“As someone who has lived in the UK for over 50 years, I still remember the Labour Party as the promoter of the Race Relations Act while the Conservative Party had Enoch Powell making speeches about “Rivers of blood.”

I made a similar point in my piece “Hard-edged but inclusive” written for the book "Are we there yet? A collection on race and Conservatism" published by DEMOS and the Runnymede Trust:

“As Conservatives we can be proud of our party’s early pioneering of racial equality by selecting a Jew, Benjamin Disraeli, as our party leader and then prime minister. At the same time we need to be objective and recognise that our party produced Enoch Powell, who I regard as a racist; while Ted Heath sacked him from the shadow cabinet he was never expelled from the party and instead left voluntarily over the European Economic Community.”

After I wrote these pieces, some of my younger Party friends accused me of being an old fogey, and were incredulous that Enoch Powell could still be relevant to voting patterns today. Accordingly I had a feeling of quiet vindication when I read “Degrees of separation - Ethnic minority voters and the Conservative Party” by Lord Ashcroft. If you search the full report, Enoch Powell gets five mentions. The focus groups organised by Lord Ashcroft and his team show that Enoch Powell’s ghost still haunts us, and is costing us votes. To give just one of the quotes:

“The Tories had a lot of racist policies so it was easy not to vote for them. They appeared to be a racist group. ‘If you want a nigger for a neighbour, vote Labour’. And if you go back to the rivers of blood speech, Enoch Powell, there was no-one in the Conservative Party denouncing him and saying this isn’t the way forward. What he said was widely accepted.” [BC] (Black Caribbean)

At a personal level, no matter what else Enoch Powell did for our country, for me he will always be simply the racist who did not want people like me in Britain. Accordingly I was dismayed to read some of the comments to Paul Goodman’s piece “Enoch Powell, the dazzling man who won only 15 votes in a Tory leadership election”.

What is to be done?

We need to learn from the most electorally successful British politician since Margaret Thatcher. When Tony Blair became Labour Party leader, few voters thought that Labour was serious any more about Clause IV of its constitution. However it remained a tangible link with the old Labour of state control and it was a brilliant stroke to force through its repeal.

I suspect relatively few voters today genuinely believe that the Conservative Party really is a party dominated by racists. However Enoch Powell will remain an excuse for ethnic minorities to not vote Conservative until the Party deals properly with his memory. His impending centenary provides the perfect opportunity, and it is our leader David Cameron who needs to perform the exorcism with a high profile speech.

Mr Cameron does not need me to write his speeches for him, but the points I would make, in outline form, are as follows: 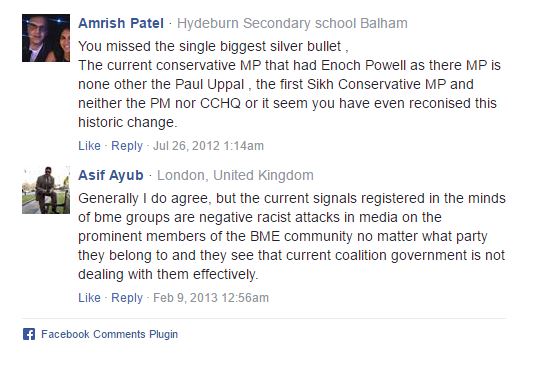