Movement46 is an organisation for liberal internationalists of all parties. It was set up in 2019 by people who broke away from the Conservative Party, and I have been supporting it since the month it was formed in August 2019.

Since March 2020 I have been a director, as it is a company limited by guarantee.

On 14 June 2020 Movement46 published an article I wrote in a personal capacity explaining why the UK should ask the EU for an extension to the 31 December 2020 termination date of the Brexit transition period.

It is no surprise that PM Johnson's Government has adamantly refused to ask for an extension. Their determination on this point does not stop their decision being a mistake.

You can read my article on the Movement46 website. It is also reproduced below.

Avoiding shooting ourselves in the foot on 30 June 2020

On 31 January 2020, the UK left the European Union. I regard that as self-inflicted damage. However, Prime Minister Johnson clearly considers it an essential step towards a new British “Golden Age.”

Why hasn’t anything changed yet?

Under the UK-EU withdrawal treaty, we are currently in the transition period specified by Article 126: “There shall be a transition or implementation period, which shall start on the date of entry into force of this Agreement and end on 31 December 2020.”

The simplest way to summarise this period is as follows. The UK remains in the single market and other EU arrangements covering matters such as data sharing, the European arrest warrant etc. It pays agreed amounts into the EU’s budget. However the UK takes no part in EU political arrangements such as meetings of ministers and has no members of the European Parliament.

That depends on what future relationship the UK and the EU mutually agree, if any. There are three broad possibilities:

Trade under any of the above three categories of possibility will be reduced compared with the status quo. The damage to the economy increases as one moves down the list.

Why is 30 June relevant?

There is a paper “The Brexit transition extension 2.0” published on 11 June 2020 by the European Policy Centre. It explores the legal scope, if any, for an extension to be agreed by the parties after 30 June 2020 but before 31 December 2020 when transition ends.

Normally two parties to an agreement can agree anything. However the problem here is that under EU law the EU may not be legally capable of agreeing an extension outside the existing Article 132 (1) without the individual agreement of all 27 EU member states (plus relevant subdivisions). That would pose both the problem of getting 27 countries (plus subdivisions) to agree and managing the logistics of so many individual country ratifications in a short timescale.

In my view, for the reasons explained in the paper, once 30 June 2020 is passed, an  extension becomes very problematical and is probably impossible.

What is the Government’s position?

PM Johnson is known to pride himself on his classical education. I suspect he was probably emulating Odysseus protecting his sailors from the sirens by blocking their ears with wax, while Odysseus himself was tied to the mast.

Of course, with an 80-seat majority, it is straightforward for PM Johnson to eliminate the above legal prohibition. As he is not known for his consistency, I put nothing past him. Nevertheless, as one gets closer to 30 June, eventually Parliamentary logistics risk making amending the law impossible even if he unexpectedly decides to do so.

The current status is that on 12 June 2020 Cabinet Office minister Michael Gove formally notified the EU that the UK will not extend the transition period. On behalf of the EU, Mr Sefcovic responded: “From our side, I have taken note of the position of the UK on this issue and have stated, as President von der Leyen has already done, that the EU remains open to such an extension.”

Why is the Government taking this approach?

One can only speculate.

There is a widespread perception amongst Brexiters that the EU only negotiates seriously when a deadline is imminent. I believe they expect the EU to “fold” close to 31 December and give the UK the very wide-ranging trade agreement that PM Johnson occasionally talks about, while requiring negligible obligations on the part of the UK.

This reminds me of Mr Gove saying before the 2016 EU Referendum “The day after we vote to leave, we hold all the cards and we can choose the path we want.”

While PM Johnson has never set out a clear vision for Britain outside the EU, many ardent supporters of Brexit talk about “Global Britain” as a buccaneering trading nation charting its own course independently in the world.

The world as it is today

My perception is that the proponents of “Global Britain” see a different world from the one that I see.

Below is a chart using data from the World Bank website showing the UK 2018 GDP of the UK and the three most important non-UK trading blocks. 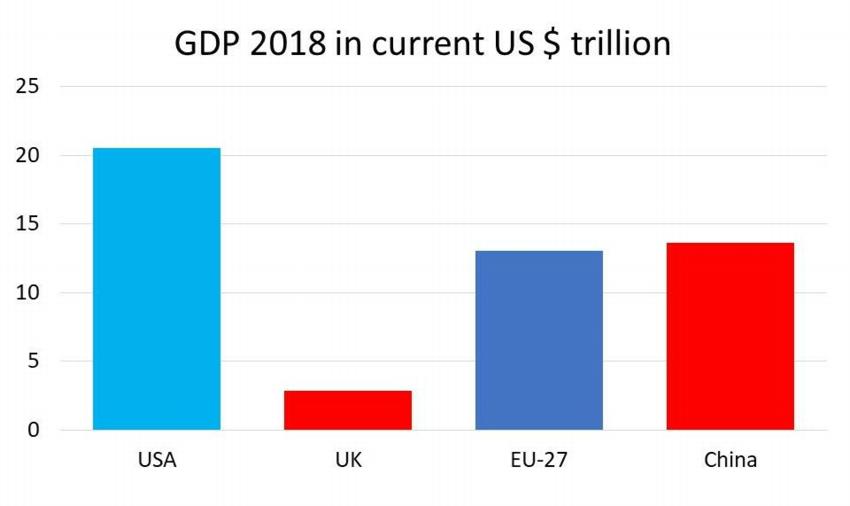 The WTO itself is in disarray. President Trump has a strong dislike of international organisations and has been blocking appointments to the WTO appellate panel. Accordingly trading under WTO rules, which has always been problematical, is likely to become even more difficult.

There is still a remarkable air of unreality regarding some Government propositions. Earlier this month there was a story  “Britain ready to allow import of chlorinated chicken from US.” This had the reassuring message that, to avoid farmers being undercut by lower US welfare standards, a dual tariff regime would see different levels of duty on imported foods, depending on whether they comply with UK welfare standards.

There is a simple principle in international trade negotiations.

Big countries (measured by their GDP) get what they want while small countries take what they are given. The idea that the USA would meekly accept that the UK is willing in principle to allow imports of chlorinated chicken into the country, but makes them prohibitively expensive with a high tariff strikes me as simple wishful thinking.

With President Trump currently embarking on a trade war, and possibly a new Cold War, with China there is only one realistic choice for the UK. That is to align itself with one of the “Big Three”, while accepting that it will be severely constrained in the way that it can deal with the other two.

In practice, given that PM Johnson has put all this effort into getting away from the EU, and China being problematical for many reasons, that means the UK becoming a satellite of the USA. It would mean that in future the USA makes the rules while the UK follows them.

What does this mean for our economy?

Ever since Mr Johnson became Prime Minister, he has refused to provide any Government forecasts of the economic impact of leaving the EU and trading under different future scenarios.

However, under PM Theresa May in October 2018 the Office for Budget Responsibility did publish forecasts. While the OBR does not quantify how much damage a “disorderly Brexit” would cause, the discussion and analysis is sobering.

The general view of companies who trade with the EU is that ending the transition on 31 December 2020 with nothing more than WTO terms would be the equivalent of a “car crash” for the UK economy.

The jaundiced view is that the government may consider that economy has already suffered so much damage from COVID-19 that the extra damage from a forced end to transition on 31 December would not be noticed by the average citizen. If so, that would be an immoral attitude for the Government to take.

Particularly given the way the COVID-19 pandemic has precluded meeting in person for trade negotiations, with virtual meetings a poor substitute, it appears completely unrealistic that a wide-ranging trade deal will be agreed by 31 December. Particularly since both sides are so far apart.

What should you do?

Write to your MP. Ask them to tell the PM that the UK should seek an extension to the transition period in the national interest, while the UK makes up its mind exactly what its future strategy is going to be for trading with these three overwhelmingly larger and discordant economic blocs.

You can send your MP a standard email composed by Movement 46 via the Movement46 Tell Your MP page. That is quick and very easy.

However, it will have far more impact if you write using your own words. You can look up your MP's email address on the Parliament website page for finding MPs.

I suggest keeping your email to two or three paragraphs. Say what matters to you personally.

Remember to put your full name and full home address, including postcode, into the email. The first thing an MP does with correspondence is check that you are his or her constituent. If you are not, you will be ignored.

Such a communication may not succeed in achieving a change in the Government’s approach. But at least you will have tried, and you will know where the blame lies if the wheels fall off our economy after 31 December.

Mohammed Amin is a former Conservative Party member and is now a Liberal Democrat. He writes in a personal capacity.