I understand that the recent outbreak of violence in Israel/Palestine began with attempts to evict an Arab family from the property in which they lived in East Jerusalem’s Sheikh Jarrah district.

See the BBC News story “Jerusalem's Sheikh Jarrah: The land dispute in the eye of a storm.”

I visited Sheikh Jarrah on 31 December 2009 during my first visit to Israel and the West Bank. On this page I want to explain the issue and why I regard Israel’s legal policy as hypocritical.

As my review of "1948: A History of the First Arab-Israeli War" by Benny Morris explains, Israel’s 1948 War of Independence ended with an armistice in 1949.

The Armistice Line defined the operationally effective boundaries of the state of Israel. However, it was not an agreed international border since at that time the neighbouring countries, Lebanon, Syria, Jordan and Egypt did not even recognise the existence of the state of Israel, let alone a border for it.

The 1949 Armistice Line ran through Jerusalem. That part of Jerusalem west of the line, and therefore inside Israel, is normally referred to as West Jerusalem.

That part east of the Armistice Line is referred to as East Jerusalem. Within East Jerusalem is the historic Old City of Jerusalem, which still has its walls. East Jerusalem also includes other areas, including Sheikh Jarrah.

Following the 1967 “Six-Day War”, Israel acquired full control of the West Bank, (obviously including East Jerusalem), as well as other areas which are not relevant to this article.

Since then, Israel regards it as sovereign territory identical to any other part of the state of Israel.

This annexation is not recognised by the United Kingdom. That is clearly set out on the UK Government’s website page “British Consulate General Jerusalem.” See the text copied below.

The position of the UK government has remained constant since April 1950, when the UK extended de jure recognition to the State of Israel, but withheld recognition of sovereignty over Jerusalem pending a final determination of its status. We recognise Israel’s de facto authority over West Jerusalem. In line with Security Council Resolution 242 (1967) and subsequent Council resolutions, we regard East Jerusalem as under Israeli occupation.”

Israel’s purported annexation is also not recognised by the United Nations or by any significant country. See the various references quoted by the Wikipedia article “Status of Jerusalem.”

Different groups of people affected by the establishment of Israel

The creation of the state of Israel and subsequent international developments affected many people.

I have listed below seven groups which I always take care to distinguish.

Their status needs detailed explanation which is too long to fit into the numbered list above.

When the 1948 war ended, they also became Israeli citizens, like the people in category (F).

However, they received a very peculiar legal status, that of “Present Absentees.” I.e. they were present inside the state of Israel but absent from their land. See the Wikipedia article “Present absentee.”

As absentees, they became subject to Israel’s Absentees' Property Law 1950. The preceding link is to the Knesset website. However the scan there is hard to read. There is a legible text version of the Absentees Property Law 1950 on the website of UNISPAL (United Nations Information System on the Question of Palestine.)

There is an informative legal memo from the Norwegian Refugee Council "The Absentee Property Law and its Application to East Jerusalem." It explains how the law brings Arabs in category (G) within it, when they would appear to be exempt from it. It applies if they were absent (or to be more precise cannot prove that they were not absent) from Israel during the conflict.

See footnote 2 on page 2 reproduced below:

"2 A well-known issue in this context is the problem of “present absentees,” or those individuals who departed to a particular place and consequently became absentees, returned after a short while to Israel and even became Israeli citizens. Under the Absentee Property Law, their properties were still considered “absentee properties” vested in the Custodian of Absentee Property, because they were outside the borders of the State of Israel during the relevant time frame, as defined in the law."

The impact is explained in Anna Roiser’s Jewish News blog “Why we need to speak about the Absentee Property Law.”

“The broad wording of the APL meant that almost every Palestinian who left their home during the war became an “absentee” under Israeli law. This included those who had remained within what became Israeli territory, creating the paradoxical legal status of “present absentee”.

All property belonging to absentees became “absentee property”, and could be expropriated by the state without compensation. Legal geographer Sandy Kedar estimates that Israel’s Palestinian-Arab citizens had around 40-60% of their land expropriated, giving lie to the claim that the APL’s purpose was solely to manage abandoned property.”

The state they were now citizens of confiscated their land, on the grounds that they were absent from it, despite being present inside the boundary of the state!

This is equivalent to the Republic of Ireland, after the 1921 ending of the Irish War of Independence, confiscating the Limerick homes of Irish citizens who were Protestants because when the civil war ended those Protestant citizens were absent from their Limerick homes due to having fled to Galway and being present there.

(The Irish example did not happen. I just want to illustrate what Israel did, which I regard as unconscionable.)

After Israel annexed East Jerusalem, its legal system allowed people who had lived in East Jerusalem before the 1948 war to reclaim their land and buildings, if they had evidence to show that they had owned the property concerned before they fled as refugees in 1948. This of course in practice applied only to Jews falling into category (B) above.

By then, these properties were lived in by Arabs who had occupied them after their Jewish owners had fled during the 1948 war.

In some cases, Jews who had re-established their pre-1948 legal title to properties in East Jerusalem allowed the Arab occupants to continue living there on payment of rent. This appears to have been the case with the Arab family whose attempted eviction for allegedly non-payment of rent was a reason, possibly the principal reason, for the recent flareup mentioned above.

In other cases, the Jews who had reclaimed their pre-1948 properties were keen to live in them again as part of making East Jerusalem more Jewish.

See the photograph below which I took in East Jerusalem when I visited in January 2010. 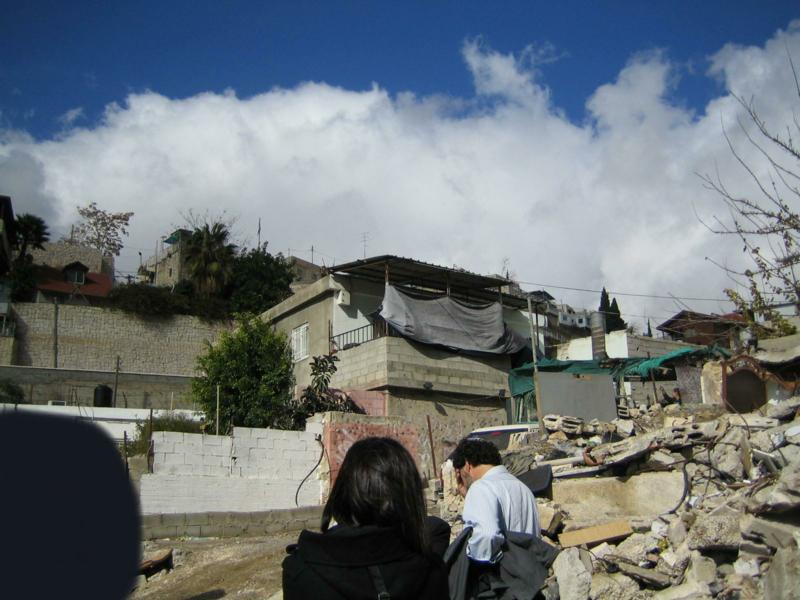 The man in the foreground wiping his eyes due to weeping is Rabbi Arik Ascherman who showed us around Sheikh Jarrah.

To his right is the recently demolished home of a Palestinian family. Israel makes it virtually impossible for Palestinians to receive planning permission for building or extending houses, so they face a constant threat of demolition. We met the family who had lived there.

High up in the background is a house where a flagpole is visible. The flag is not clear in the photograph, but it was an Israeli flag. This was a repossessed house of the type mentioned above, where the pre-1948 owner or their descendants have had the state of Israel enforce their pre-1948 legal title.

Why Israel’s conduct is hypocritical

Many people were dispossessed in 1948 and the subsequent international developments mentioned above.

There are roughly equal numbers of people in categories (C) and (E) above who have been dispossessed by the Arab states and by Israel respectively. Only some kind of international bargain could bring approximate justice to the people in those categories.

However, the people in category (G) above are Israeli citizens who were dispossessed by their own country.

Israel refuses to recognise their claims to the land that they owned before 1948 on the grounds, in my view entirely specious, that they were absent from their land on a particular date, even though they were still within the boundaries of the state of Israel.

I regard that as sheer hypocrisy.