The Times Newspaper in London carried an interesting article posing this question on its website today. As that website now has a paywall, I have not tried linking to it. However, the article can be read on the website of "The Australian", which is another part of the News International Group.

The article refers to the Islamic Bank of Britain "limping on." As a company whose shares are publicly traded, Islamic Bank of Britain plc (IBB) publishes its accounts on its website. The Annual Report and Financial Statements 2009 show a significant loss in 2009. IBB has in fact lost money every year since it started operations, as its old accounts show, and by the end of 2009 had only 50,000 customers. The article also refers to the limited success of Lloyds and HSBC in the UK retail market, although those banks are not required to disclose separate figures for their Islamic banking operations.

So why has it not taken off? In my opinion the reason that retail Islamic finance has not taken off in the UK in the manner originally hoped is that the addressable market is very small. There are only about 2.4 million Muslims in the UK, many of who are too young to need banking services, and many others are too poor to be profitable customers for Islamic banks.

Furthermore, the religious views on finance held by Muslims fall into three categories.

For example in many countries such as Malaysia and Bahrain where Islamic banking is long established, about 70% of all banking is still conventional. While some of this will be banking by non-Muslims, especially in Malaysia, much of it will be banking by Muslims who do not share the view that all interest is prohibited in all circumstances.

Some Muslims do regard conventional banking as impermissible but consider Islamic banking as practised today to be acceptable from an Islamic perspective.

Some Muslims consider that both conventional banking and Islamic banking as practised today are impermissible.

What this religious segmentation means is that only Muslims in category (2) are part of the addressable market for Islamic finance, since retail Islamic finance is not cost competitive with conventional finance due to lacking economies of scale and higher transaction costs due to contractual complexity. While I have no statistics, my view is that in the UK this addressable market is tiny.

Overall, I would not expect to see any dramatic growth in the UK retail Islamic banking market, and consider that the most effective way of serving the market is either as a part of a larger business as with Lloyds and HSBC. They achieve economies of scale as they are able to use their existing branch infrastructure to distribute Islamic products as well as conventional products. The other cost effective approach is to set up as an internet based business.

I was interviewed very briefly about the same points by Zubeida Malik of the BBC Radio 4 "Today" programme on Monday 16 August 2010, which was my first ever appearance on the "Today" programme. That interview was available on the BBC iPlayer, but only until 22 August 2010.

I would like to stress that this page is based entirely on public domain information. 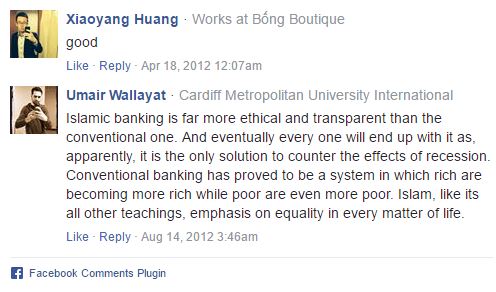