Most non-Muslims know very little about Islamic finance. There have been several press stories recently implying that the UK Government is giving some kind of unfair benefit to Muslims by changing UK tax law to facilitate Islamic finance. At the same time, many Muslims also have difficulty understanding Islamic finance and are surprised when they learn that it is usually more expensive than conventional finance.

This page covers one form of financial product, the provision of finance to an individual to purchase a property. This could be their private residence, or it could be property that is rented on to tenants, whether commercial or residential.

There is a downloadable PDF version.

Before looking at Islamic finance, it is important to be clear how conventional mortgages work. They fall into two main types.

In this case, the price of the money being lent is fixed for the entire duration of the mortgage. For example a property costing £500,000 may be financed under the following terms.

The customer needs to make 25 annual payments of £26,607. Table A below shows the complete calculations.

UK lenders typically prefer to make variable rate loans, as this allows an easier match between the lender’s own funding and the mortgage loan advanced. The variable rate can either be linked to an external rate, e.g. Bank of England rate + 0.5%, or it can be an administered rate which is set by the lender, e.g. the XYZ Building Society’s standard variable interest rate.

The customer makes level regular repayments which are calculated to pay off the loan by the maturity date, based upon the current level of the variable interest rate. If the interest rate changes, the customer’s repayments are recomputed.

For example consider a variable rate repayment mortgage with the following terms:

Note: The payment frequency would normally be monthly. Annual payments are used purely for illustration to reduce the number of rows on the table of figures. Similarly the interest would be adjustable more frequently than annually, typically monthly or even daily.

Table B below shows the numbers; the customer’s annual repayments go up and down as the interest rate changes, but in every case are calculated to repay the loan by the end of year 25 on the assumption that there are no further changes in interest rate.

The aggregate interest paid in Table B exceeds that in Table A because of the different assumptions made regarding the level of the interest rate at different points in time.

In this case, the customer is only required to make payments of interest. The customer has flexibility to make capital repayments when he wishes, and in any event must repay the full loan on the repayment date if it has not been repaid beforehand. For example:

As the lender is taking the risk that the customer will pay off no capital until year 25, it has a greater risk exposure than with a repayment mortgage where the amount of debt outstanding reduces over the life of the loan. Accordingly lenders typically only offer interest only mortgages to their more creditworthy customers.

There is no point producing a table of figures for an interest only loan, as the pattern depends critically on how much the customer chooses to repay before maturity and when he chooses to make those pre-maturity payments. If the customer pays off no capital until year 25, on the repayment date he must find £375,000 to repay the loan in full.

The purpose of Islamic finance, as found in practice, is to replicate the economics of the above conventional mortgages while remaining compliant with Shariah.

It would also be possible to devise Shariah compliant property finance contracts that had different economics, for example by having the Islamic bank share in any increase in value of the property, but such contracts are uncommon for reasons connected with the bank’s risk management and also due to customer demands. Such alternative contracts are beyond the scope of this simple introduction.

There are two main contracts used.

The Islamic bank may offer finance to the customer on the following terms:

The contract is illustrated in the following diagram.

Table C below shows the customer’s payments to the Islamic bank and the amount of purchase price outstanding at any time. The total cost of the finance is £290,182 since the customer ends up paying a total price of £790,182 for a house that he could have bought for £500,000 if he had that amount of money available on day one.

However, there is a practical problem if the customer wants to sell the house to someone else and repay the Islamic bank, say at the end of three years. Under Table C, at the end of three years, the customer still owes £585,360 to the Islamic bank. (This compares with £350,230 owed on the same date with a conventional fixed rate mortgage.) It seems grossly unfair if the customer has to pay the bank £585,360 if he wishes to clear the debt at the end of year three. In economic terms, the Islamic bank will be making a windfall gain compared with the transaction running the full 25 years, since it is getting the money paid back early, with part of it being paid back 22 years early.

The logical thing would be for the bank to recompute the transaction to allow a discount for early payment. However I understand Shariah scholars do not allow the murabaha contract to contain early repayment provisions specifying how the bank will reduce the amount owed if the customer repays early. Instead the customer has to rely upon the Islamic bank reducing at its discretion the amount it demands for early repayment. Few customers regard that as satisfactory.

The terms of the finance offer may be summarised as follows:

The diagram below shows how the transaction operates.

Table D below shows the numbers; the customer’s annual repayments go up and down as the interest rate changes, but in every case are calculated to ensure that the customer has fully purchased the bank's share of the property by the end of year 25 on the assumption that there are no further changes in interest rate.

People encountering Islamic finance for the first time are often surprised that an interest rate can be referenced in the calculation of the rent that is to be paid. Shariah scholars permit this because the interest rate is merely being used to compute an amount; what gets paid is rent for occupation by the customer of the bank’s share of the property, not interest.

The financial implications are set out on Table D. The cash flows are identical to that of the variable rate repayment mortgage.

Unlike the murabaha mortgage, the diminishing musharaka poses no problems if the customer wishes to buy out the bank early. At any stage, the customer only needs to pay the amount shown on the table as the original cost of the part of the property owned by the bank.

Replication of interest only mortgage

This is achieved by giving the customer complete flexibility regarding when he buys out the bank, provided that he does so by the termination date of the contract.

There are three main issues.

Does Islamic finance require the use of Shariah law for the contracts?

The contracts used in Islamic finance need to avoid violating the requirements of Shariah (hence the term “Shariah compliant”) but there is no requirement for the governing law of the contracts to be Shariah. Islamic finance contracts made between a UK Islamic bank and a UK customer are always made under English law or Scottish law respectively.

Similarly Islamic finance contracts within the USA would normally be made under the law of the state where the property was located, e.g. Pennsylvania law.

For the diminishing musharaka contract, one would expect the rent paid by the customer to be deductible if loan interest would be deductible, but the tax law of the relevant country would need to be considered carefully.

However the murabaha contract presents greater problems. A tax system which looks at the economic substance of transactions will probably re-analyse the murabaha transaction as a financing transaction and concluded that it is equivalent to a loan at 5% interest.

However a tax system which looks primarily at the legal form of a contract will simply analyse the transaction as the Islamic bank selling the property to the customer for £790,182 as stated in the contract. That means there is no tax deductible finance cost.

Most countries have some kind of tax charged on the sale of real estate. In the UK the relevant tax is called Stamp Duty Land Tax (SDLT).

For a purchase financed with a conventional mortgage, the customer pays SDLT once on the third party price of £500,000.

However, with Islamic property finance, SDLT would be charged more than once. For example with the murabaha purchase the initial purchase price of £500,000 would be subject to SDLT and so would the sale by the bank to the customer for £790,182. This results in an overall SDLT cost much higher than with a conventional mortgage.

The UK legislated in 2003 to eliminate the extra SDLT charges, so that the Islamic property finance transaction bears the same SDLT cost as the equivalent conventional mortgage financed acquisition.

As explained above, the pricing for Islamic property finance is based upon prevailing market interest rates for conventional finance. That is inevitable in an economy where money can flow between the two sectors; having a price for “Islamic money” that was different from the price for “conventional money” would simply create arbitrage opportunities that would damage the Islamic finance sector.

In practice, Islamic property finance is usually more expensive than conventional property finance, even though both are based upon the same market price for money. There are two basic reasons for this:

As mentioned above, this paper is devoted entirely to Islamic property finance contracts that replicate conventional mortgage contracts. That is consistent with market practice, as the Islamic finance market mostly consists of replicating conventional contracts. It is possible to devise other Shariah compliant contracts that do not replicate conventional finance, but they form a small part of the market and are beyond the scope of this paper as they would unduly complicate it. 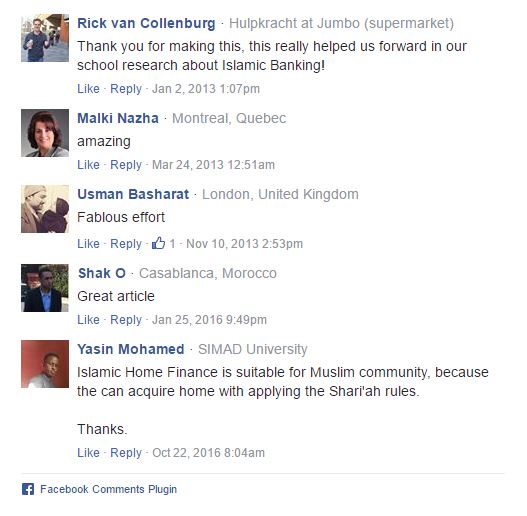