The 13 April 2011 edition of Islamic Finance News contained several articles about Islamic finance in the UK. I contributed an article about liquidity management, which is reproduced here with the concurrence of the editor. This version uses hyperlinks unlike the printed version.

Liquidity management is a challenge for British Islamic banks.

Balancing between too much and too little liquidity is one of the key challenges for anyone running a bank. After explaining the basic issue for conventional banks, this article outlines why liquidity management is even more challenging for Islamic banks, and then considers the situation of Islamic banks established in Britain.

The key management challenge is that holding liquidity imposes a cost on banks in the form of foregone profits. Conversely, holding insufficient liquidity can be fatal.

The diagram below which was taken from the Bank of England website shows the sterling yield curve on the 4th March 2011 and also for comparison the yield curve on the 10th February 2011. At that time the data spreadsheets from the same page showed an interest rate of 0.69% for one month duration borrowings. 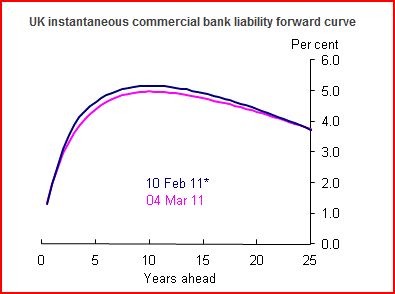 In very simple terms this means that a conventional bank can borrow “one month money” at 0.69% and lend it out as a 10-year fixed rate loan earning about 5%, making a profit of 4.31%. This duration mismatch is one of the key reasons a bank is able to charge borrowers a higher rate of interest than it pays to its depositors. If instead the bank made loans of only the same duration as its borrowings, it would not benefit from the spread between short term and long term rates.

The danger for the bank is that its one month borrowings will become due in 30 days, and will need to be rolled over. If it cannot roll those borrowings over, it risks failure. Readers will remember the queues in the summer of 2007 around branches of the UK conventional bank Northern Rock once customers developed doubts about the bank’s ability to repay its short term borrowings.

There are three principal ways a conventional bank manages its liquidity risk:

Islamic banks neither pay nor charge interest. However their business model is essentially the same as that of conventional banks: they take money from customers on a short term basis, and use that to finance businesses and individuals on a longer term basis. Accordingly they face the same liquidity management risks as conventional banks, but can find it harder to manage those risks.

There is a smaller range of short term liquid assets that Islamic banks can hold. Interbank commodity murabahah transactions entail credit risk (unlike Treasury bills). Also they have fixed durations, for example 30 days, and may not be convertible into cash before their maturity date.

In some countries, central banks have created suitable liquid assets for their Islamic banks to invest in. More recently, on the 25th October 2010, 13 institutions agreed to set up the International Islamic Liquidity Management Corporation (IILM) headquartered in Kuala Lumpur, Malaysia. These founding bodies included the central banks of a number of Muslim majority countries, but also the central bank of Luxembourg, a country which promotes itself for Islamic finance business. IILM will issue high quality Shariah compliant instruments which Islamic banks can hold for liquidity management purposes.

Some long term assets held by Islamic banks, such as sukuk, can obviously be sold. Others such as ijarah contracts and diminishing musharakah contracts should be saleable provided that the documentation permits sale. However the bank’s Shariah scholars may not permit the secondary trading of the bank’s rights under long term murabahah contracts.

The UK’s Islamic banks all account on a calendar year basis. At the time of writing, they have not published their 2010 accounts, but their 2009 accounts are available. They show the following composition for their liquidity:

This review of the banks’ balance sheets illustrates the problem of insufficient liquidity management assets mentioned above. All of the liquidity, apart from any actual cash, comprises balances with other banks and murabahah and wakalah transactions with financial institutions which will primarily be banks. In passing, apart from BLME, the other banks appear to be holding more liquidity than they would need for risk management purposes, but a more detailed review would be needed to confirm that.

It is not practical to review the ‘other assets’ to consider how saleable they might be should the banks face a sustained liquidity outflow. However, looking at BLME’s accounts since it has the largest balance sheet, of its £543.3 million ‘other assets’, only £96.7 million comprise murabahah agreements, where resale may present Shariah issues. It should be permissible from a Shariah perspective to sell the balance of the ‘other assets’, provided the relevant documentation allows sale by BLME. 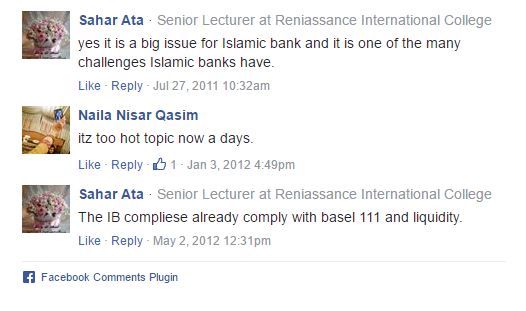