The magazine Islamic Finance News published my article with the above title on 15 February 2012. It is reproduced below.

MOHAMMED AMIN provides an analysis of cross-border Islamic Finance payments paid from the UK to Malaysia.

For obvious reasons, countries do not attempt to tax foreign persons unless there is some nexus with the country concerned. Such a nexus can arise in two ways:

In the first case, the country normally charges tax (income tax or corporation tax) on the business profits made within the country, calculated by comparing revenues and expenses. In the second case no attempt is made to compute the profits of the business as the only connection with the country is the payment which has originated there. Instead, if tax is charged at all, it will be charged simply by reference to the amount of the payment. To ensure that the tax is collected, the in-country person making the payment is required to withhold the tax and pay if over to the country tax authorities. The foreign person only receives the net amount after deduction of the withholding tax.

To decide if a particular cross-border payment will suffer withholding tax requires knowledge of:

Tax law is different in every country. Furthermore a country may have double taxation agreements in force with dozens of other countries. While such treaties may have similar language there are often differences of detail, since each treaty is negotiated by a unique pair of countries.

Accordingly it is impossible to give a generic answer to the question asked in the title. However to illustrate the principles, this article considers cross-border Islamic finance payments paid from the UK to Malaysia.

What kinds of payments are made in Islamic finance?

(a) Payments of the same nature as in conventional finance

Some Islamic finance transactions give rise to payments that are essentially the same as in conventional finance. For example, a Shariah compliant investor may choose to invest only in those transactions which satisfy certain Shariah screening tests, such as not carrying on a prohibited business (e.g. selling pork) and not earning or paying more than a limited amount of interest. These companies will pay dividends to the investor, and the investor may make a capital gain by selling the shares that he has purchased. There is no reason for treating these dividends or capital gains as being different from dividends/capital gains involving companies which fail the Shariah screening tests.

The tax analysis of such payments in Islamic finance is relatively straightforward, as there is extensive experience with the equivalent conventional payments. For example the UK charges 20% withholding tax on rental payments in respect of UK real estate if paid to foreigners; which applies regardless of whether it is a conventional land lease or an Ijarah contract. Conversely the UK generally does not charge withholding tax on leases of movable property located in the UK.

(b) Payments which are of a different nature from conventional finance

Some Islamic finance transactions involve payments whose economic nature is quite different from conventional transactions that they may be similar to. This is best illustrated by considering a commodity murabaha transaction. 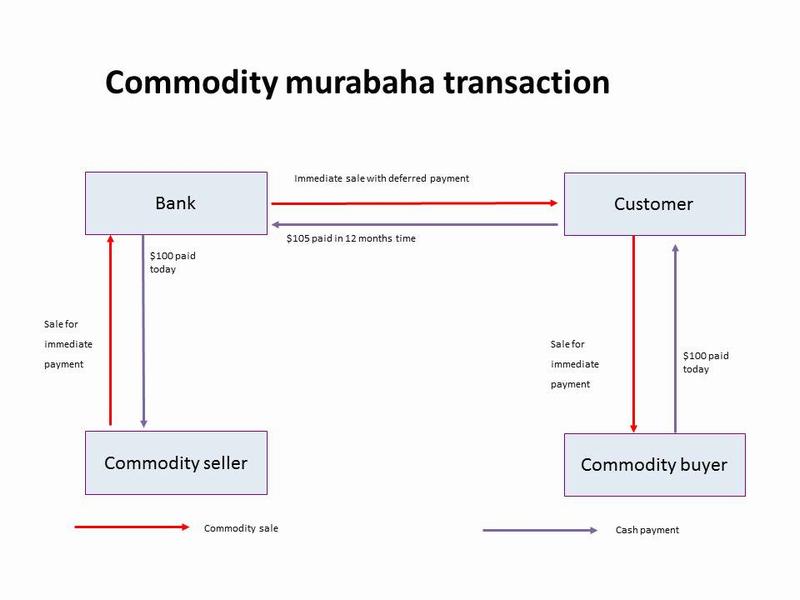 The transactions here are the purchase of copper by the bank, its sale to the customer and the customer’s sale of the copper to the market.

Most countries, including the UK, would not charge tax to a foreign bank that engages in such transactions with copper located within the country unless the bank had some other connection with the country such as an office. Otherwise, it is normal for double tax treaties to give taxing rights to the country of residence of the bank. That is the case with the UK/ Malaysia double tax treaty.

However with commodity murabaha, neither the bank nor the customer wishes to have any exposure to market price fluctuations during the holding period, and the holding period is kept to the bare minimum. Furthermore the price of US$105 for copper whose immediate re-sale value is only US$100 can only be justified as being arms-length because 12 months credit is allowed for payment of the US$105 price by the customer.

In economic terms, neither the bank nor the customer can be regarded as trading in copper since that involves taking the risk of price fluctuations over a meaningful holding period, even if that holding period is only a few hours. Instead the correct economic analysis is that the transaction is a financing transaction, having the same economic consequences for the bank and for the customer as a loan of US$100 for 12 months at 5% interest.

In general, both the UK and Malaysia charge withholding tax on interest paid to foreign persons. Accordingly one needs to ascertain whether any withholding tax arises on this transaction.

The UK has enacted specific tax law for this transaction. It has the effect of treating the difference between the two prices of US$5 (US$5=US$105-US$100) as ‘alternative finance return’ which is treated for tax purposes in the same way as interest.

The legislation which requires the withholding of income tax at 20% when an interest payment is made to a foreign person then becomes applicable. Accordingly under domestic UK law, the customer would withhold 20% of US$5, i.e. US$1 when paying the US$105 to the foreign bank located for example in Malaysia.

The definition does not include the mark-up on a commodity murabaha contract as there is no debt-claim giving rise to income. Furthermore the profit of US$5 that the bank has made appears to fall within the definition of “business profits” in Article 7 of the treaty, which would permit only Malaysia to tax the profits, as the bank does not have a taxable presence in the UK. The overall conclusion would be that the treaty would have the effect of preventing the UK from withholding tax from the US$5 commodity murabaha profit.

The definition problem is likely to be resolved as the UK renegotiates its double taxation treaties. The current UK/ US treaty is newer than the UK/Malaysia treaty, and contains the following definition of interest in Article 11(2):

The critical difference is that the UK/ US treaty treats as in interest “all other income that is subjected to the same taxation treatment as income from money lent by the taxation law of the contracting state in which the income arises”. Accordingly, the interest article of the UK/US treaty would apply to the US$5 profit. The effect would be to reduce the UK withholding tax to zero, which is the withholding tax rate on cross-border interest under the UK / US treaty.

In the case of Islamic finance payments which are of a different nature to conventional finance, one must first determine their tax treatment under national law. That will provide a first indicator of whether any withholding tax is due.

However the national withholding tax requirement may be overridden or reduced by the effect of a double taxation treaty. Most double taxation treaties were negotiated without any consideration being given to Islamic finance. In those cases, the effect of the treaty may be to give a tax outcome different from the natural expectation, as illustrated by the above UK/Malaysia commodity murabaha transaction.

Disclaimer: As all taxation issues need specific professional advice, the author disclaims any responsibility to anyone who acts or fails to act as a result of the discussion in this article.