I have written this page for several reasons:

Tax advisers are reluctant to talk about their work in detail because client affairs are confidential.

Furthermore, there is always concern about leaking valuable intellectual property to competitors. For example, see my explanation of why I did not write a fellowship thesis for the Chartered Institute of Taxation for nearly 20 years.

However, the case study discussed below relates back to 1978. Since then, much of the tax law has changed so there is no intellectual property that can be lost by writing about it. Apart from being anonymised (the real client was not called “ABC Inc”), the client no longer exists due to a combination of acquisitions and disposals between 1978 and now.

Tax law is immensely complicated, even more so when the laws of two different countries have to be considered at the same time. However, I have explained most of the rules within the text, and sought to keep the language simple. Apologies for any tax jargon that remains.

In 1978 I had been a qualified chartered accountant for about a year, and had passed my membership exams for the Institute of Taxation (now called the Chartered Institute of Taxation) about 6 months prior. I was working in the tax department at Arthur Andersen & Co in Manchester which I had joined in late 1977.

I was at Arthur Andersen from 1977-1984, long before the collapse of the firm due to US problems, primarily their audit of Enron and its aftermath.

I had recently been assigned as part of the team (tax partner, tax manager, tax senior) working on the UK tax affairs of a major US multinational, ABC Inc. I was the tax senior.

The tax partner called me into his office and explained the problem.

ABC Inc had many subsidiaries in the UK. In accordance with normal practice, they were all owned, directly or indirectly, via a UK holding company. The reason is that a UK holding company was required to establish a UK group so that taxable profits and tax losses within different UK subsidiaries could be netted against each other before computing the corporation tax payable by the UK group.

In the simplified diagram below, think of these as UK Subsidiaries A. In total, they had cost about £100 million and UK Hold Co was capitalised with £100 million of share capital. 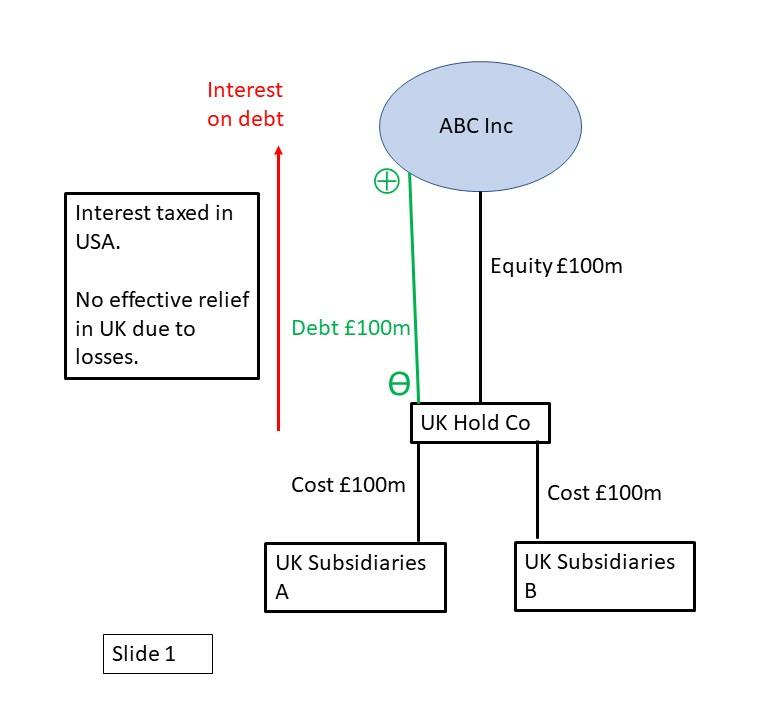 More recently, ABC Inc had made a major UK acquisition, represented on the diagram by UK Subsidiaries B which had also cost about £100 million.

At that time, UK corporation tax rates were significantly higher than those of the USA. Furthermore, the US system for calculating foreign tax credit relief is very complex which can mean that a US parent company is often unable to obtain effective tax relief in the USA for overseas taxes paid by the foreign (non-US) subsidiaries which have paid the dividends to the USA.

Accordingly, to reduce the UK corporation tax payable by the UK subsidiaries of ABC Inc, the acquisition of UK Subsidiaries B had been financed by ABC Inc lending £100 million to UK Hold Co.

However, tax planning is often vitiated by unexpected commercial developments. In the business environment of the period, the overall result of the UK subsidiaries of ABC Inc was to lose money commercially. Accordingly, the UK group had net tax losses rather than taxable profits, even before considering the deductible interest on the loan from ABC Inc.

This meant that ABC Inc was paying tax in the USA on the interest income while saving no UK corporation tax from the interest expense in UK Hold Co. This is a case of tax planning having made the situation worse rather than better, because the future facts turned out wrong.

The easiest solution was that the £100 million debt should be converted into share capital. That would eliminate the interest income in the USA and therefore eliminate the extra tax being paid on that interest. Obviously, it would also eliminate the deductible interest expense in the UK, but that did not matter as the UK had tax losses anyway.

The problem with converting the loan into share capital was that, in 1978, the UK had a tax called capital duty payable on the issue of share capital. From memory, the rate was 1%. Accordingly, £1 million of capital duty would be payable if the solution was implemented.

The tax partner having outlined the problem to me invited me to think about alternative ideas before we advised the client to implement converting the loan into share capital.

Back at my desk, I thought about the problem. I think it took me only a few minutes to think of a solution which I then sketched out on some pieces of paper and took back to the tax partner.

From memory, this was the first instance of really creative tax planning that I came up with at Arthur Andersen.

Under the tax law at that time, a company was UK resident if its “central management and control” was located in the UK. In practice, that entails consistently holding the meetings of the company's board of directors within the United Kingdom.

Also, under the tax law at that time, a company was US resident if it was incorporated in one of the 50 states of the USA.

Accordingly, a US incorporated company whose central management and control was in the UK would be resident in both the USA and the UK simultaneously. This meant that both countries treated the company as a (domestic) resident company for tax purposes.

Having incorporated DRC Inc, ABC Inc would then transfer its entire shareholding in UK Hold Co to DRC Inc in exchange for shares.

The group structure at this stage is shown in the diagram below. 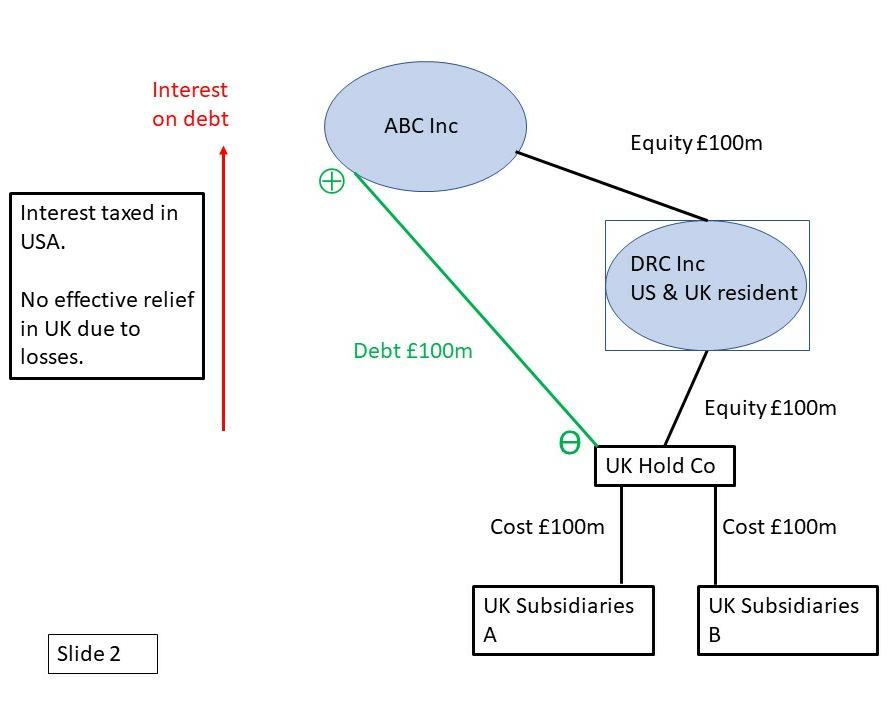 At this stage, the interest flow to the USA is unchanged.

The next step is for DRC Inc to buy £100 million worth of subsidiaries from UK Hold Co. For convenience, UK Subsidiaries B are the ones shown in the diagram as being purchased.

DRC Inc pays UK Hold Co by issuing a debt instrument (say a promissory note) for £100 million. This debt can be payable on demand.

The debt can also be interest free with neither the UK nor the USA tax authorities being concerned about the debt being interest free:

No UK tax is payable on the sale of UK Subsidiaries B by UK Hold Co to DRC Inc. For UK tax purposes, this is a sale within a wholly owned group of UK companies, which triggers no corporation tax on capital gains. Furthermore, there is no stamp duty charge since, for UK stamp duty purposes, groups of companies are considered on a worldwide basis.

The diagram below shows the status at this stage.

The debt which UK Hold Co owes to ABC Inc can now be repaid. It is repaid by UK Hold Co assigning to ABC Inc the debt owed by DRC Inc.

The final situation is shown in the diagram below: 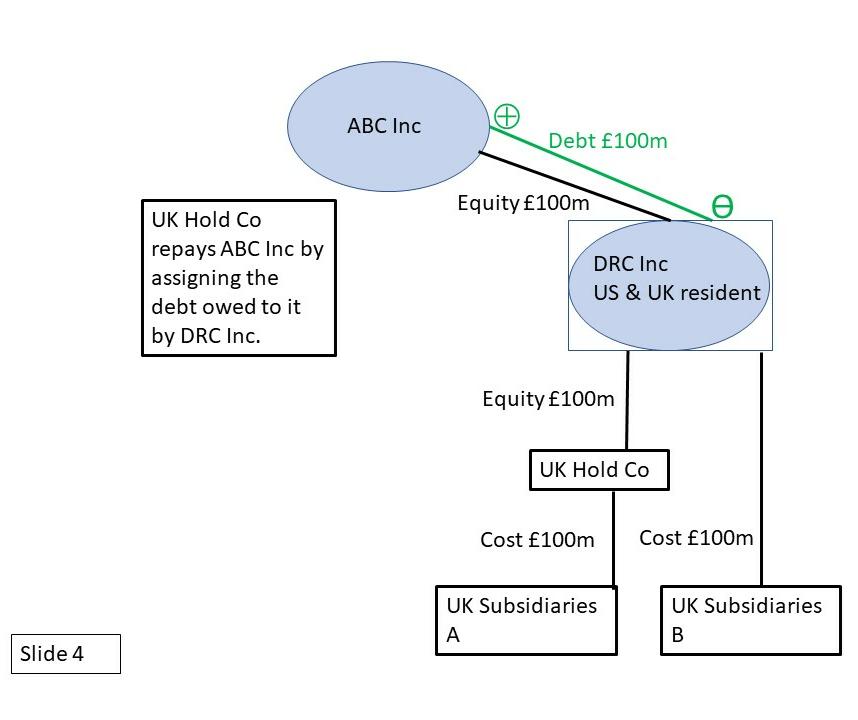 The debt now owed by DRC Inc to ABC Inc can be left as interest free.

The final “icing on the cake” point about this tax planning is that if the group wishes, in future interest can be charged on the debt.

Any such interest paid by DRC Inc to ABC Inc will not cost any US taxes since it will be eliminated in the US consolidated tax return of the group of companies which is headed by ABC Inc.

However, if the UK group would otherwise be paying corporation tax, charging interest on the debt will create a tax deduction within DRC Inc for the interest expense which can be surrendered as group relief to offset against the taxable profits of other UK group companies, thereby reducing UK corporate taxes.

Effectively, charging interest on the loan owed by DRC Inc gives a “free” tax deduction to the ABC Inc worldwide group since it reduces UK taxes without increasing taxes anywhere else in the group.

The tax partner looked at my solution and agreed that it worked. He liked it.

Accordingly, I was asked to draft a short memorandum which we sent to the client. The fee for this work came to about £2,500 which of course the client was delighted to pay since we had solved a major tax problem for them.

Personally, I was "walking on cloud 9" (in a state of blissful exhilaration) for several days since I was overwhelmed by having solved such a difficult tax problem (since the tax partner had not previously thought of a solution wihthout a £1 million tax cost) with such major amounts of tax at stake for the client. I had saved the client £1 million of capital duty, as well as creating the possibility of a "free" interest deduction in future years.

The above is consistent with my experience from three decades as a tax adviser.

Quite often tax planning is not implemented for a variety of reasons, or sometimes fails to achieve its objectives because circumstances change. That had been the case with the original debt owed by UK Hold Co to ABC Inc, created at a time when the UK group had been expected to be profitable for tax purposes.

As explained in my pieces "Paying tax is not a moral issue" and "The corporate duty to avoid tax" governments create tax law which taxpayers have to obey.

However, within the law, taxpayers aim to carry on their business and their personal affairs in a manner which pays no more tax than the law requires after taking into account any opportunities within the law to reduce the taxes payable.

Where the affairs of companies or individuals are complex, that coplexity increases the risk of inadvertently paying too much tax, which is why tax advisers are required.

All tax law is stated as of 1978, and is stated from memory. As the article mentions, most of the tax law referred to above has since been amended.

Please also note the disclaimer of all legal responsibility which is in the footer of every page of my website.