Muslims who came from (or whose ancestors came from) India, Pakistan and Bangladesh have, on average, much worse health than Anglo-Saxon Britons.

This will partly be due to poverty. For example white residents of central Glasgow have a life expectancy which is 11 years less than white residents of East Dorset, as shown in research reported in the Daily Telegraph. However, even when you control for the effects of poverty, South Asians have seriously worse health.

In 2007, the Department of Health produced an excellent guide to healthy fasting during Ramadan. Page 5 of the report gives brief details of the poor health and lifestyle choices of the Asian community in general and the Muslim community in particular. If you want more details of the poor health of British citizens of Paksitani and Bangladeshi ethnic origin, take a look at the NHS Health Survey for England 2004, Volume 1 "The health of minority ethnic groups." In particular, the standardised risk ratios for Type 2 Diabetes on page 89 of the report are shocking. I have summarised them below in a slide I used when speaking to the Southwark Muslim Forum AGM in July 2009. 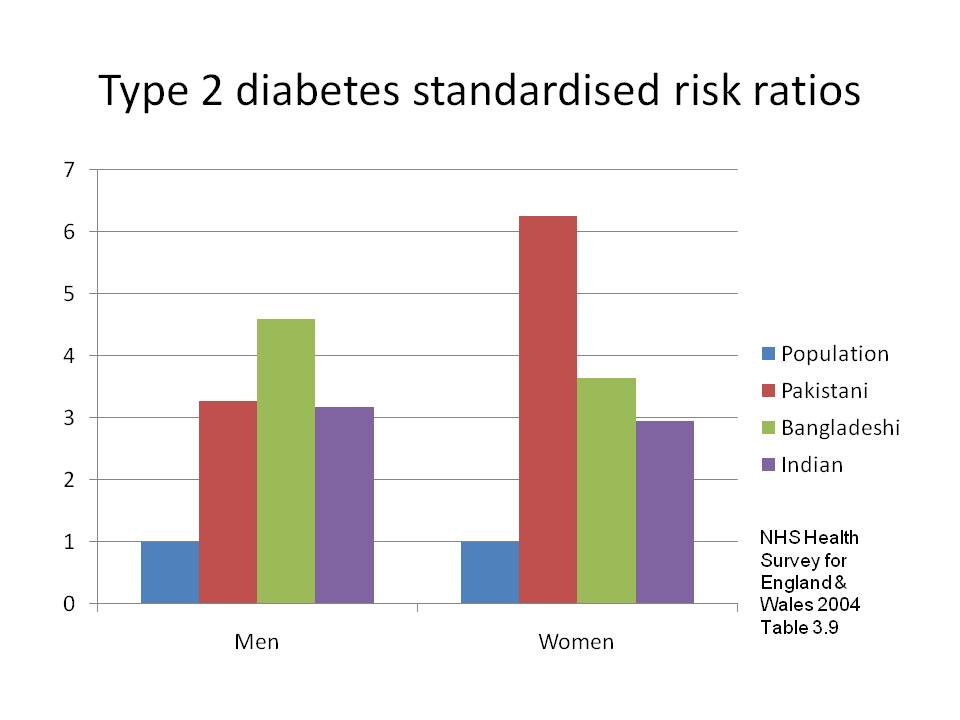 Why are we so sick?

In my opinion, there are two fundamental reasons, genetics and lifestyle.

There appear to be a number of genetic factors that affect South Asians. At the most trivial, a brown skin inhibits the body's manufacture of vitamin D, which has more impact in the UK than it did in India. More importantly, South Asians appear to have a genetic predisposition towards heart disease and diabetes, which did not have much impact when we lived as agricultural labourers in the sub-continent, but does matter now that we have sedentary lifestyles.

As this is a blog and not a research paper, I will let readers do their own background reading on the genetics if interested. However, the key point about genetic inheritance is that we cannot change it; we have to adjust our lifestyles with the knowledge that we have.

The other reason, lifestyle, we can do something about.

Drinking whole milk, cooking with ghee, eating meat with every meal, eating Asian sweetmeats which are almost solid sugar; these are some of the behaviours which are killing us. As well as traditional Asian sweetmeats, sugary carbonated drinks have also become very popular with people from a South Asian background.

You can guess with almost 100% accuracy what food and soft drinks will be served to you if you attend an Asian wedding or other function.

Eating like this occasionally hurts nobody; eating like that every day is a recipe for heart disease, diabetes and early death; something I have sadly seen too often with friends and relatives. When we were poor Indian farmers, meat was a rare treat, and we worked off the calorie input with hard manual labour. Now we don't; instead we get sick, or die without warning from a heart attack or stroke.

What can we do about it?

In a word, stop eating like Pakistanis, Bangladeshis and Indian Muslims. (Hindus have a natural health advantage if vegetarian.) Your ethnic background does not have to dictate what you eat, and I don't define my identity by what's in my refrigerator.

Everything we have heard about the Mediterranean diet is true; Spaniards and Italians really do have a healthier diet than white Britons, and far healthier than South Asian Britons. However, you don't have to live on pasta; at the eastern end of the Mediterranean lies Lebanon, with a cuisine far healthier than Pakistan or Bangladesh. Compare the usual south Asian restaurant menu with the average Lebanese restaurant with its taboule, hummus etc, and you will see exactly what I mean.

Below is a gripping 90 minute lecture given in 2009 by Robert H Lustig, MD, University of California at San Francisco Professor of Pediatrics in the Division of Endocrinology.

In it he explores the damage caused by sugary foods. The key point is that different sugars are metabolised differently by the liver with different consequences for health, especially your insulin cycle. Glucose is much less harmful than fructose because the main damage is done by the products that come from metabolising fructose. Sucrose is almost as bad as fructose, since it is half fructose (as well as half glucose).

While fruit contains fructose, eating fruit is not harmful in the same way as drinks containing fructose due to the beneficial effects of the fibre in the fruit.

The science as he explains it is compelling, but people with no background in biochemistry may struggle with parts of the video. If you care about your health, I strongly recommend watching it.

This 90 minute lecture, also given by Dr Lustig, is a 2013 follow on to the lecture above. It spends less time on the biochemistry and more time on looking at exactly how food choices affect our bodies, and the way that the food industry adds sugar to so many foods.