Video and transcript of Mohammed Amin's speech. He summarises his own contributions as a donor, how the project is governed, and why it matters.

Curriculum for Cohesion is a collaboration between academics, teachers, employers and lawyers. It is developing a method for understanding religion in a multi-faith world, with a focus on Islam, for the use of teachers, lecturers and the judiciary. I helped Dr Matthew LN Wilkinson to plan the project, was the first significant donor, and have been a patron since the project's inception.

On 26 June 2014 we held our third annual dinner at the Royal Over-Seas League to bring together the project’s academics, patrons and friends. The annual dinner is the only time that all of the people involved with the project have a chance to get together. We had a glittering array of guests, who are listed on the Curriculum for Cohesion website.

I was one of the speakers, and my speech can be watched by clicking the image below. It plays in a new window or tab.

The text of the speech is reproduced below the image. 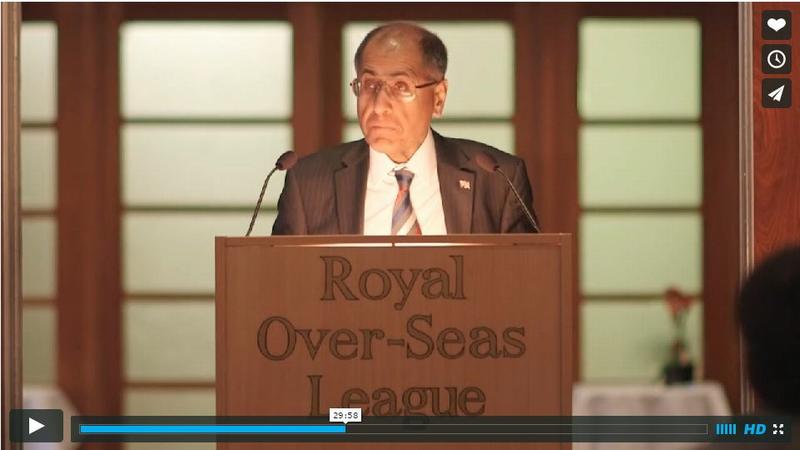 Text of the speech

Good evening and peace be with you.

My own perspective as a donor

We launched our fundraising appeal in August 2011. The first £3 donation came from Matthew and Lucy's 3-year old son Gabriel Wilkinson.

Initially, everyone else we approached said that it was a great concept but that their charity budget was fully committed elsewhere. Accordingly the next £30,000 came from me which got the project started. Since then many other donors have come on board including a number of generous people in this room.

I am still giving £1,000 per month. My cumulative gifts are now just over £51,000 which I think makes me the second largest donor. Money that I believe has been money well spent.

Looking back over the three years I can already see the difference that Curriculum for Cohesion has made with our impact on the National History Curriculum, and the diffusion of Matthew Wilkinson's and the team’s ideas more generally.

I believe that the book “A Fresh Look at Islam in a Multi-faith World: a philosophy for success through education” will have a major impact on the way teachers of young Muslims, and therefore also their pupils, think about Islam.

How Curriculum for Cohesion is governed

Small decisions I make by myself. For example I approved what we spent on our logo and visual identity. For big decisions, I consult all major donors.

So far we have only had two big decisions.

Firstly, Matthew Wilkinson's rate of pay from the very beginning has been set out in our budget which has always been on our website. About a year ago I held a donors meeting just before the annual dinner to discuss and approve an increase in the rate of pay.

Secondly we needed to agree how intellectual property should be owned. For this I consulted all major donors by email.

We haven't had a donors meeting today as I don't believe in meetings just for the sake of them but am always available to other donors or anyone else who wishes to discuss the governance of the project.

Quite apart from the formalities, I have worked very closely with Matthew Wilkinson on Curriculum for Cohesion ever since we began. At times it has felt as if he had completely taken over my diary! Even though I am not an academic I have read all of our papers and discussed them with Matthew in draft. The book I left to the academic advisors.

My main contribution has been teaching Matthew to avoid using the words epistemology and ontology except with other academics. However I've seen so much of Matthew that I am afraid I might be starting to understand
those words myself!

Why I think it matters so much.

Ideas matter. In the field of Islam in society and in education we are suffering from an absence of good ideas.

Last year I mentioned how the French philosopher René Descartes changed the way that everyone in the world thinks. While Matthew is not quite that ambitious there are some really important questions that Curriculum for Cohesion is dealing with in a way that is academically rigorous and concretely useful.

On issues like this Curriculum for Cohesion is providing real intellectual leadership. That is why I have given it so much commitment.