To many non-Muslims, “Shariah” simply means a barbaric penal code involving chopping off people’s hands or stoning people. That mistaken view is easily explained by the facts that many Muslims themselves fixate on those punishments when talking about Shariah.

Better informed non-Muslims use the term “Shariah” interchangeably with “Islamic law”, or talk about “Shariah law.” That is more accurate, but still misses something important. My understanding is that Shariah is a great deal more than just a set a set of laws that can be interpreted by judges.

The Arabic word for “law” in Islam is fiqh, so one has “fiqh al ibadat” (Arabic for “the law of worship”) and “fiqh al muamalat” (Arabic for “the law of day to day transactions”). For both, one can look up detailed books of law, and questions about whether something is permitted or not permitted under the law can be referred to appropriately qualified scholars to judge.

However, while fiqh is a part of Shariah, Shariah is more than just fiqh.

I was recently prompted to write about this after I read a piece on Conservative Home with which I disagreed strongly. My response is reproduced below.

In the example, for brevity I focused on the extent to which one is charitable beyond the fiqh rules for Zakat. The same point could be made even more strongly with other aspects of Shariah such as "Taqwa" (often translated as "fear of Allah" or "God consciousness") which cannot be measured by judges who cannot look into your soul.

What Shariah really means to Muslims

Mohammed Amin is Vice Chairman of the Conservative Muslim Forum but is writing in a personal capacity.

I was inspired to write this piece in response to Martin Parsons’ “Stopping the spread of sharia should be central to British foreign policy.”

I share many of Martin Parsons’ concerns about the increase in religious extremism amongst some Muslims, such as the activities of Boko Haram in Nigeria which I regard as both criminal and un-Islamic. However I want to explain why adopting an explicit policy against Shariah would be disastrous for British foreign policy.

I recommend reading Rashad Ali and Haras Rafiq’s article “Sharia doesn't mean what Islamists claim it means”. Paul Goodman referenced this article in his 31 May 2011 post on the Prevent Review and referred to “sharia, the religious law of Islam.” However treating Shariah as being the same as Islamic law (fiqh in Arabic) actually misses a fundamental point.

My eureka moment was a “dog that didn’t bark in the night” insight when I read Mohammad Hashim Kamali’s “Principles of Islamic Jurisprudence.” While the author is careful to define Arabic terms when he first uses them, he fails to do so with the word "Shariah" and the word is missing from the glossary at the end of the book. This oversight suggests that he thought the word was obvious, because it is so fundamental to Islam, and that caused him to forget to define it.

The original meaning of Shariah according to “The Spirit of Islamic Law” by Professor Bernard G. Weiss is “The path to the water hole”. Given the importance of water in Arabia, it is not surprising that in Islam Shariah came to mean “The path to salvation.” The etymology in the Wikipedia article quotes “Understanding Islamic Law: From Classical to Contemporary” by Irshad Abdal-Haqq as follows "Shar'iah, or more properly Al-Shari'ah, literally means the pathway, path to be followed, or clear way to be followed, and has come to mean the path upon which the believer has to tread.”

Accordingly, Shariah is much more than Islamic law (fiqh).

An example of how Shariah is more than fiqh

Muslims are obliged to give Zakat, which is one of the five pillars of Islam. In a country whose laws are based on Shariah, such Zakat is compulsorily collected by the state, as with any tax. There are rules set out in the books of fiqh about how Zakat is calculated, which assets it applies to etc. In countries with secular laws, such as the UK, nobody collects Zakat compulsorily, but the fiqh rules are the same; it is up to the individual Muslim to apply them.

In both cases, it is possible to go to experts in fiqh who can tell you the rules. In an Islamic state, some such experts will be judges who arbitrate disputes about the amount of Zakat the state can take off you. In Britain, fiqh experts will give me an opinion; it is then between me and God what I do.

However the general obligation in Islam to be charitable does not stop with Zakat as calculated by the rules of fiqh. Without getting into boring details, a rich person can practice “Zakat avoidance” (similar to tax avoidance!) by primarily owning assets that do not attract Zakat. However the general Islamic obligation to be charitable is an integral part of Shariah, and if I seek to avoid giving Zakat by “Zakat avoidance,” and also do not otherwise give to charity, I would expect a bad outcome on the Day of Judgement.

The rules of fiqh however do not tell me how much voluntary charity I should give; the level of charitableness beyond Zakat that God expects of me is not something that you can put into legal rules that a judge can arbitrate on.

Overall, Shariah encompasses much more than just those rules that can be litigated within an Islamic legal system or can be arbitrated by human judges. Instead, as Irshad Abdal-Haqq explains, Shariah is the totality of what God expects of us.

When you criticise Shariah, for the reasons I explain above, you are criticising Islam itself. Individuals are free to criticise Islam, but I don’t think Her Majesty’s Government setting out to do so will advance the national interest.

Our country believes in certain fundamental rights, set out very well in the UN’s Universal Declaration of Human Rights. So do I. Accordingly, we should not hesitate to require all countries to adhere to standards such as:

None of this requires the UK to set itself against Islam, which is where Martin Parsons’ proposition would lead us. 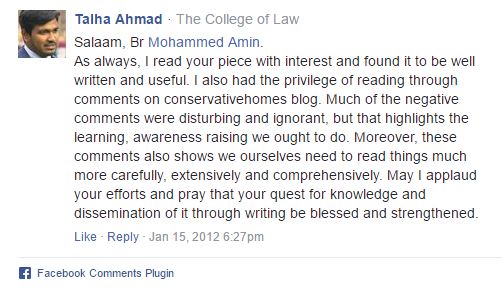