Imam Rashid Musa is the Muslim chaplain at the University of Salford's Faith Centre. This houses the offices of the University’s chaplains as well as providing facilities for students. For example, they have a fully kosher kitchen with separate meat and dairy cooking facilities.

He recently asked me and my Jewish Co-Chair Cllr Heather Fletcher, to explain to the University’s students why the Muslim Jewish Forum of Greater Manchester was created. To show the students that engaging in such community service also helps the volunteer, he specifically asked us to share how helping the Forum had benefited us personally.

Both presentations were recorded and can be watched / heard below along with our responses to the students' questions.

I began by outlining the differences between Britain’s Jewish and Muslim communities covering matters such as:

I then explained how the Forum was designed, and why it had an explicit focus on relations between Muslims and Jews (and the wider community) entirely within Greater Manchester.

Regarding personal benefit, I shared how involvement with the Forum led to making many new friends and to many connections with the Jewish community’s national leaders.

Video of my PowerPoint presentation

I have also made my PowerPoint slides available for download.

Cllr Heather Fletcher talked about the 118 events that the Forum has put on since it was formed in 2005. She explained how media organisations writing stories about our events has given our work a much wider reach beyond the people who attend our events. One of our picnics even had a big write-up in a national tabloid newspaper!

Regarding personal benefit, Heather explained that the Forum had provided her first experience of serving on a committee, chairing meetings and organising community events. This had been an important factor in her getting involved with electoral politics. Like Amin, Heather  also emphasised how the Forum had led made her new friends and had taken her to many interesting places (at her own expense!)

Heather's presentation can be heard below.

Heather referred to our many past events. The Forum's website page "News and past events" lists our previous events. For events that took place after our website was created in 2010, that list contains links to a page with more information about each event.

A partial transcript of the question and answer session

The question and answer session was also recorded. However, I am not publishing the full audio recording for two main reasons:

Instead, I have listened to the Q&A session and, where I regarded the questions as being worth sharing, have written down a condensed version of the questions. I have then published the audio of our answers.

Before the first question, I added a supplemental comment to my presentation.

Recording of my 20-second remarks

1. Do you hold any events together with the wider Interfaith Forum in Salford or Manchester?

The answer mentions Rogers Govender who is the Dean of Manchester Cathedral.

2. Do you work with children in schools and with young people?

My answer mentions our that twice we have had a children's football tournament. The Forum's website page "Boys Football Tournament" contains more details about the second of those.

3. What advice would you give to students about working in the community to foster better relations between Muslims and Jews?

I was frank about the uncomfortable feelings many people have about going into new environments, and shared some of my personal experience.

I suggested that Muslims should consciously set out to volunteer at Jewish organisations, rather than taking the comfortable option of volunteering at Muslim organisations.

4. Are Jews willing to go to an event at a mosque, or do all events have to happen at synagogues or neutral venues?

As a supplement to Heather's answer, I mentioned Maimonides and what he had to say about Jews entering mosques and churches.

Recording of the speakers' 3-minute answer

5. Mohammed Amin said during his talk that he thought that the biggest religious divide in society is between those who have any religious belief and those who have no religion. Do you have an thoughts for how to bring those two groups together?

In my answer, I mentioned that one of our most regular attenders is a Humanist Celebrant.

6. Has your group ever pushed for any legislation?

I mentioned my petition in 2015 to preserve kosher and halal slaughter which only happened because a past Co-Chair of the Forum contacted me about the issue. Heather mentioned our campaigning to keep Nick Griffin and Tommy Robinson out of the European Parliament, amongst other things.

Recording of the speakers' 4-minute answer

7. Is it realistic for the Forum to keep avoiding the Israel / Palestine conflict when that is such a major source of tension between Muslims and Jews?

Heather gave her perspective as a Jew who has limited engagement with Israel.

I mentioned that my invitation to give a one-hour lecture on the Israel / Palestine dispute had come as a result of my connections with Greater Manchester Humanists which the Forum had created. I also talked about my one-week trip to Israel in 2018 with the Conservative Muslim Forum and the high-profile people I met there.

Heather also mentioned the need for more younger people to join us.

Recording of the speakers' 4-minute answer

The group photo below shows the speakers with some members of the University Chaplaincy Team. From left to right: 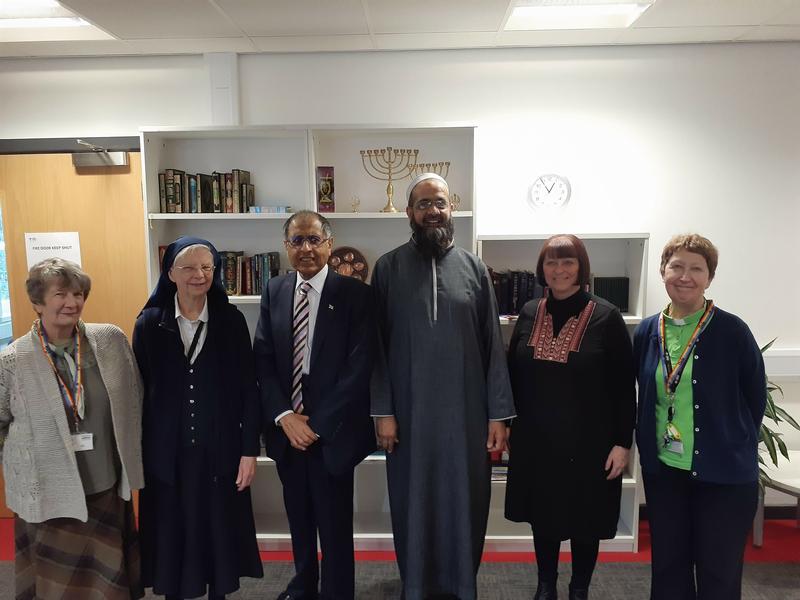