Only time will tell whether President Biden's decision to honour President Trump's commitment to withdraw all American troops from Afghanistan was sensible or not.

On 21 August 2021 Tony Blair argued strongly against it in his article “Why We Must Not Abandon the People of Afghanistan – For Their Sakes and Ours.”

When I read it, although I found his arguments very persuasive, I was dismayed by his using the term "Radical Islam" four times. I expected him to be more careful with his choice of language.

Accordingly, I wrote my second published piece on the Liberal Democrat Voice website. You can read it below, but will need to visit the LDV website for the readers' comments.

How we name our enemy’s ideology really matters

All complex thinking requires language; either words and sentences or symbols and equations. In conflicts we particularly need to think clearly. Our chosen words must pass two critical tests:

In state warfare, the enemy’s name is normally obvious. On 3 September 1939 Britain’s Prime Minister accurately declared that “this country is at war with Germany.”

Our word choice passed both tests:

Ever since 9/11, America and Britain have struggled with nomenclature. Specific enemy groups are easy. “Al Qaeda” and the so-called “Islamic State of Iraq and Syria” are clearly enemies. With them the only challenge is identifying their members. But what do you call their ideology?

One of my American Muslim friends, Aamir Rehman subsequently gave me another example of President Bush's care on this point.

On Friday 14 September 2001, in the memorial service at the National Cathedral in Washington, the first invited religious speaker was a Muslim, Imam Muzammil H. Siddiqi.

Watch at 2:13:20 in the video below. Earlier on the video mentions that Bush was involved in the planning of the service.

After identifying that 9/11 was Al Qaeda’s doing, President George W Bush emphasised that America was not at war with Islam. Just six days after 9/11, he visited a mosque in Washington DC, speaking eloquently against the harassment of American Muslims and the need to respect Islam.

That still leaves the problem. If the enemy’s ideology is not called Islam, what do we call it? Political leaders have grappled with this problem ever since; some better than others.

To my surprise, Tony Blair, far better read than Mr Trump, in his recent otherwise excellent article “Why We Must Not Abandon the People of Afghanistan – For Their Sakes and Ours” four times calls the enemy’s ideology “Radical Islam.”

So if “Radical Islam” fails the tests, what name should we use for the shared ideology of Al Qaeda, ISIS, Boko Haram, Al Shabab, and of course the Taliban?

There is a clear answer. While David Cameron got many things wrong, this he got right. He consistently talked about the ideology of “Violent Islamist Extremism.” But what does that mean, and how do we differentiate it from other things?

My friend, Muslim academic Dr Matthew Wilkinson has given expert witness testimony on Islamic theology in over 20 terrorism trials. Regularly, a defendant found possessing proscribed publications contends that the material is mainstream Islamic religious writing. Matthew has to give his expert opinion on the defendant’s claim.

People asking him how to distinguish “sheep and goats” led Matthew to write the book “The Genealogy of Terror: How to distinguish between Islam, Islamism and Islamist Extremism.” During his writing, we debated the precise categorisations for many hours.

The book does what it says on the tin. After reading it, you will know how to tell different Muslims apart. My review is at the above link. In this case, the picture below really does tell a thousand words. 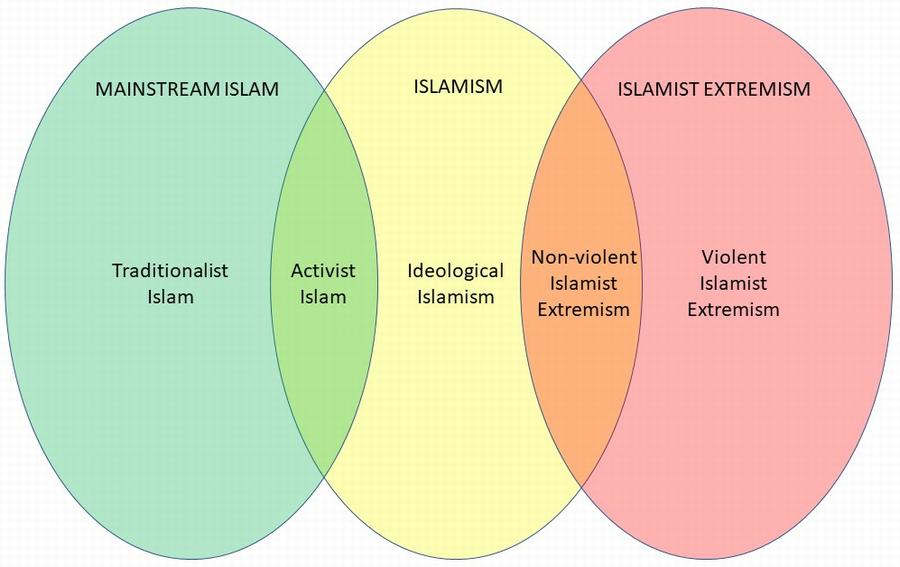 As you can see, Mainstream Islam, Islamism, and Islamist Extremism overlap. That gives rise to 5 distinct worldviews. If you are curious, I believe I fall within Activist Islam. The enemy groups listed earlier all share the worldview (ideology) of Violent Islamist Extremism.

Their fellow travellers, who do not fight themselves, hold the worldview of Non-violent Islamist Extremism.

As Liberal Democrats, we should never risk alienating Muslims by referring to Radical Islam. Instead, we should consistently use the term Violent Islamist Extremism for our enemy’s ideology.

We should also understand why it is vital to prevent British Muslims being drawn into Non-violent Islamist Extremism.

Mohammed Amin MBE is a member of the Liberty Network board. He is writing in a personal capacity.