Shechita is the technical term for slaughtering an animal in accordance with Jewish religious law so that its meat is kosher, assuming that the animal itself falls within the categories which are permissible to be eaten by Jews such as sheep and cows. The equivalent technical term in Islam is zabihah, but as its usage in English is less common, in this page I have used the phrase "halal slaughter". In both cases the animal is killed by having its throat cut.

From time to time shechita and halal slaughter become an issue in politics and the media. The issues tend to fall into the following categories:

Are shechita and halal slaughter cruel?

It is frequently alleged that shechita and halal slaughter cause suffering to the animal compared with killing the animal using other means such as a captive bolt fired into the brain.

Several decades ago, in 1978, Wilhelm Schulze and his colleagues, and published a paper in German, in the journal Deutsche Tieraerztliche Wochenschrift which summarised various pieces of research into the cruelty issue. I received a photocopy several years ago, and an English translation is available on the internet.

The research involved inserting electrodes into the brains of animals, waiting until the electrode insertion wounds had healed, and the slaughtering the animals by using a captive bolt or by cutting its throat. It is worthwhile reading the full paper, but I have copied its key conclusions below:

“These documents reveal the following: The investigations carried out aimed at providing objective data for the evaluation of ritual slaughter from an animal welfare legislation point of view. As part of the research project the effectiveness of captive bolt stunning was first analysed using EEG. Comparable data about the ritual slaughter were then gained using the same method of deduction and evaluation. The ritual cut experiments were carried out on 17 sheep of the breed “black headed meat sheep” and 15 calves of various breeds. To further investigate the occurrence of low frequency potentials in sheep stunned by captive bolt followed by a bloodletting cut, six sheep were stunned in a second phase of the experiment by captive bolt and then bled at various intervals.

The approach of these studies can be summarised as follows:

Experiments for measuring the heart frequency and brain activity during slaughter conditions were carried out on 23 sheep and 15 calves. After implanting permanent electrodes into the Os frontale the cerebral cortex impulses were measured for 17 sheep and 10 calves during ritual slaughter and for 6 sheep and 5 calves during captive bolt application with subsequent bloodletting. Some sheep were additionally subjected to thermal pain stimuli after the ritual cut.

The investigations had the following results:

In summary the following conclusions are possible:

The slaughter in the form of ritual cut is, if carried out properly, painless in sheep and calves according to the EEG recordings and the missing defensive actions.

During the experiments with captive bolt stunning no indications could be found for proscribing this method for calves.

For sheep, however, there were in parts severe reactions both to the bloodletting cut and the pain stimuli. A proof of the reliable effectiveness of captive bolt stunning could not be provided using the methods applied.”

The American Temple Grandin is an expert on animal welfare in the context of large scale slaughter.  On her website she has written extensively on “ritual slaughter practices” and in particular addressed some studies that purport to show that shechita and halal slaughter are cruel.

Shechita UK have an excellent document "A Guide to Shechita (May 2009)" on their website. Page 11 addresses the question "Is there any scientific evidence to show that shechita is humane?" and amongst other items cites the work of Temple Grandin mentioned above. I have given one quote from that page below:

“Having witnessed the Jewish method carried out on many thousands of animals, I am unable to persuade myself that there is any cruelty attached to it. As a lover of animals, an owner of cattle and a veterinary Surgeon I would raise no objection to any animal bred, reared or owned by me being subjected to this method of slaughter”.

This question is a difficult one philosophically and rarely discussed.

There are those who argue that humans should not kill animals for food in any circumstances. While they are entitled to be vegetarians, I do not think they have the right to enforce vegetarianism on other people.

Observant Muslims and Jews are quite clear that if an animal is not slaughtered in the religiously mandated manner, then its meat cannot be eaten. Accordingly, if shechita and halal slaughter were banned, they would be forced to give up eating meat. While animals should not be subjected to avoidable pain and suffering, the rights (if animals are accepted as having any rights) of animals are clearly significantly less than the rights of humans; after all we kill and eat animals but do not allow animals to eat humans!

Accordingly, I would require overwhelming evidence of significant extra pain and suffering to the animals concerned before even engaging in any discussion of whether some humans (comprising over 20% of the human race) should be banned from killing animals in the only manner that they regard as religiously appropriate. No such overwhelming evidence of significant extra pain exists, so there is no need to attempt to conclude on the question itself.

A little while ago, the Daily Mail newspaper carried a series of articles under the theme Halal Britain.

Its article on 19 September 2010 Britain goes halal... but no-one tells the public: How famous institutions serve ritually slaughtered meat with no warning made the point that many establishments use halal food without telling their customers. That included some chains owned by Whitbread.

“Whitbread, which also owns Table Table restaurants, Costa Coffee shops and Premier Inn hotels, admitted last night that 80 per cent of the chicken it served comes from halal poultry ­suppliers, including some in Muslim-dominated Turkey.
A Whitbread spokesman said: ‘We don’t specify halal as a requirement in our procurement. We base our ­decision on quality and price. It just turns out that we source that amount of chicken from suppliers that happen to be halal. It is not mentioned on any of our menus because we don’t think there is customer demand for that information. But if people started asking, then we would definitely provide it.’”

Its piece on 25 January 2011 Halal Britain: Schools and institutions serving up ritually slaughtered meat mentioned that:

“School children across Britain are routinely given halal meat with the only alternative a vegetarian option. In one London borough, Tower Hamlets, in east London, over 100 schools only use halal meat.”

There are two distinct issues which need to be considered separately.

Use of halal food without notifying the customer

This is clearly not done for the benefit of Muslim customers.  As a Muslim eating in a Whitbread Premier Inn hotel, I have no way of knowing that the chicken on the menu might be halal, and therefore will avoid it.

As the Whitbread spokesman quoted above made clear, in such cases meat is purchased from a supplier on grounds of price and quality, and the supplier just happens to be halal. It is up to the organisation and its customers whether the establishment mentions that the meat is halal. Most customers (excluding Jews and Muslims) do not care either way, although the inflammatory language of the Daily Mail stories is clearly trying to create a groundswell of opinion against the use of halal meat.

If a customer does care whether the meat is halal, they should ask the institution. If they are told it is halal, they can then choose to go elsewhere, which is exactly the same decision Jews and Muslims make every day in reverse.

Use of halal food in schools and sometimes other institutions, where it is labelled as such

In these cases the halal food is clearly being supplied for the benefit of the Muslim schoolchildren.

My view is that the correct course of action depends on the numbers. When I attended secondary school, perhaps 1% (or less) of the children in my school were Muslims. Obviously none of the meat was halal, and as part of a tiny minority I would not expect halal food to be provided. I spent my school days eating packed lunches.

Conversely if say 90% of the children in a school are Muslims, then the school should provide halal meat. In most cases it will not be cost effective or practical to also provide non-halal meat for those pupils who are both non-Muslim and who do not wish to eat halal meat. I do not regard it as unreasonable to give non-Muslims the choice of eating the halal meat on offer, or eating something else, since practicality requires catering for the majority, as in my school days.

My rights were not infringed when I was at school, and the rights of non-Muslim pupils in the circumstances above are not being infringed today. It is simply a case of considering what is practical and cost effective.

In my view there are no grounds for banning shechita and halal slaughter. While this conclusion might be expected since I am a Muslim, I believe that I would hold the same view even if I became an atheist tomorrow; I simply believe that the rights of humans come before the rights of animals.

Customers have a right to know if they are being served kosher or halal meat. They may have an ethical or religious objection to eating it. It is up to the establishment whether it gives an advance notice or responds to questions from those who care about the issue. However it should be recognised that, absent newspaper campaigns about halal food, few non-Jews or non-Muslims express much concern about whether the meat they are being served has been killed using shechita or halal slaughter.

Whether an institutional caterer serves meat which is expressly stated to be non-kosher/halal or is expressly stated to be halal/kosher depends upon the needs of the people eating there. Where they are majority Jewish or Muslim, it is entirely reasonable for the establishment to serve kosher/halal meat respectively, even if that means the minority of non-Jews/Muslims cannot eat the meat. It is the mirror image of the situation that prevails when Jews/Muslims are in the minority. 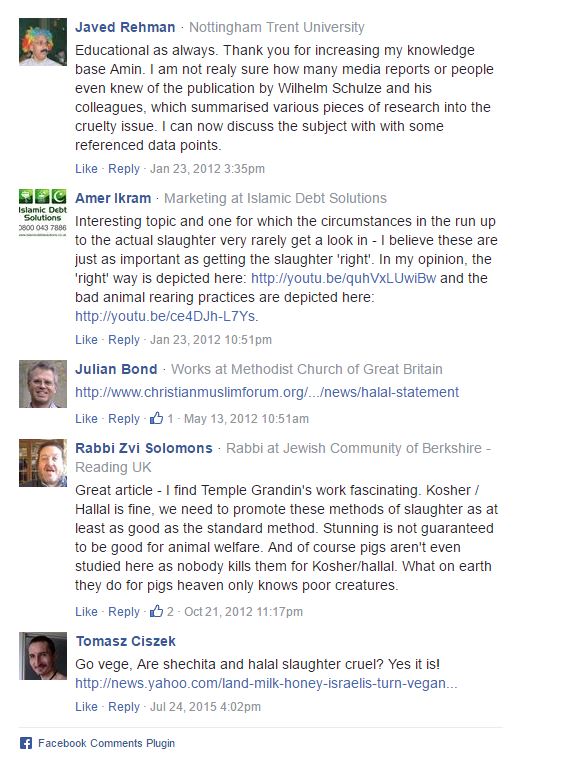