I do not believe in avoiding difficult subjects. Accordingly, when I was invited to speak at a religious freedom symposium, and allowed to choose my own topic, I decided to pose the question "Do Muslim religious texts cause religious persecution?"

On this page are:

I have re-recorded the audio from the video at (3) below so that you can listen to it while the PowerPoint presentation advances automatically. I am also making my PowerPoint slides available.

2. Background to the symposium

Since they suffered severe persecution for many years, religious freedom has always been a particular concern of the Church of Jesus Christ of Latter-day Saints. The Church owns Brigham Young University (BYU) in Provo, Utah. BYU contains within it the International Centre for Law and Religion Studies, (ICLRS) housed within BYU's J. Reuben Clark Law School.

Each year since 1994, the ICLRS has hosted a symposium devoted to the discussion of law and religion. I was invited to participate in the October 2017 symposium, "Religion and Religious Freedom in a Changing World."

Quite apart from this annual symposium, the ICLRS holds many events around the world on the interaction of religion, law, and religious freedom. See the ICLRS Annual Report 2017.

My connections with the Church started in 2011 from meeting one Mormon at random. This was at a reception before the 2011 Wilberforce Address of the Conservative Christian Fellowship. That has led to my getting to know many more Mormons, including by now having met three members of the Quorum of the Twelve Apostles. I hold Mormons in high regard as being model citizens.

My website also has the annual religious freedom of lecture which I delivered in 2016 for the J. Reuben Clark Law Society's UK and Ireland Chapter "One Muslim’s Perspective on Religious Freedom."

During the symposium, I was one of three speakers in a panel session "Faith Perspectives on Religion in a Changing World." The participants were:

I have reproduced their biographies below.

J.B. Haws is an associate professor of Church History and Doctrine at BYU. He is the author of The Mormon Image in the American Mind: Fifty Years of Public Perception (Oxford, 2013).  His PhD from the University of Utah is in American History.  He is also the coordinator of BYU's Office of Religious Outreach.  Before coming to BYU, J.B. taught seminary in northern Utah, in Salt Lake and Weber Counties. His research interests center on the place of Mormonism in twentieth- and twenty-first century America. As for his interest in history generally, he asks how could you not be interested in history when you come from a place that in pioneer-times Utah was known as “Muskrat Springs” (now Hooper)?

He is married to the beautiful Laura Favero, which he submits as yet another evidence that miracles have not ceased! They are the parents of three boys and a daughter, and they love living in Provo and cheering (sometimes too fanatically) for the Cougars.

He served a Spanish-speaking mission in Raleigh, North Carolina, so he speaks Spanish with a slight Southern accent (and English with a heavy Hooper, Utah accent).

Archbishop Socrates B. Villegas (from the Symposium brochure)

Archbishop Socrates B. Villegas is the Roman Catholic Metropolitan Archbishop of Lingayen-Dagupan having assumed the post since his appointment by Pope Benedict XVI on 8 September 2009. He is also the current President of the Catholic Bishops’ Conference of the Philippines since 2013.

He is a member of the Secular Franciscan Order (SFO) and a perpetually professed member in the Priestly Fraternity of Saint Dominic in the Philippines. He was a synodal father in the Synod of Bishops in Rome in the years 2012 and 2014. In the secular field, he was one of the Ten Outstanding Young Men of the Philippines (TOYM) in the year 2000 and a Catholic Authors Awardee in 1994.

He has authored nine books of homilies and spiritual meditations since he was priest of the Archdiocese of Manila until now. He was ordained a priest on 5 October 1985.

David Landrum (from the Symposium brochure)

Dr. David Landrum is the Director of Advocacy at the Evangelical Alliance UK.

His work involves public policy, theology, research, and media. He is a frequent contributor on Christian and secular media on a range of social and political issues. He has an academic background in political philosophy and has worked in Parliament for over ten years for Bible Society.

He is passionate about Christian social and political engagement, and his interests include public leadership, religious liberty, citizenship and religion, identity in plural society, post-secularism, and post-liberalism.

One of the great joys of attending an event such as this symposium is meeting the other participants. In particular, I shared a meal on the first evening with David Landrum, and shared a ride on a ski lift in Sundance, Utah, with Archbishop Socrates and one of his colleagues from the Philippines.

3. Video recording of the Symposium session

For technology reasons, the video cannot be embedded on this page. However clicking the image below takes you to the ICLRS website to watch the video. The timings are as follows:

I recommend watching the video, especially the question and answer session, as I respond to two questions: 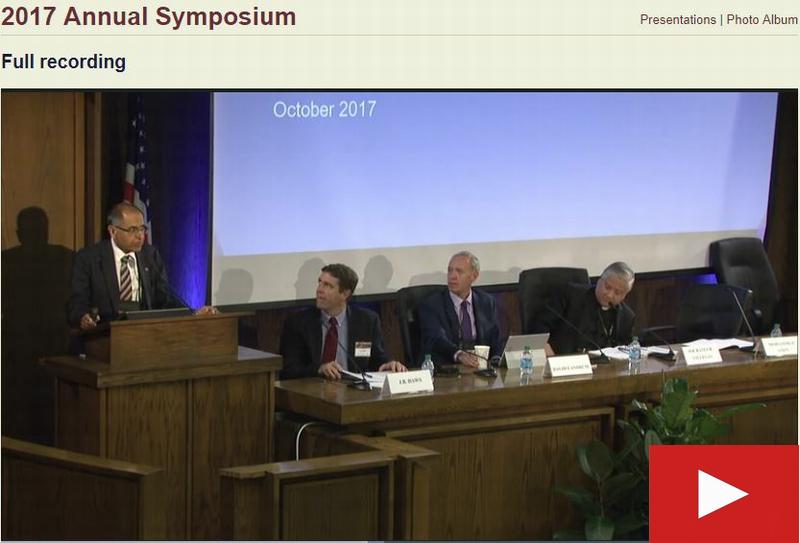