I was dismayed when I read the posting "The right to change one's religion" which was posted on the City Circle blogs site on 26 October 2007.

Following the migration of the City Circle website, that posting is not currently available. A similar piece with the same title and author, "The right to change one's religion" by Shaykh Abdullah Adhami was available for some time on the website of the Islamic Forum of Europe but is no longer there.

I have found an article with the same title and author at the Common Ground News Service date 23 October 2007. From memory the content was the same as the piece that appeared on the City Circle website. The writer accepts not punishing what he calls "private apostasy", but by implication clearly concurs with the death penalty for "public apostasy."

My personal position is identical with the United Nations Universal Declaration of Human Rights which in article 18 states:

"Everyone has the right to freedom of thought, conscience and religion; this right includes freedom to change his religion or belief, and freedom, either alone or in community with others and in public or private, to manifest his religion or belief in teaching, practice, worship and observance."

As a human being, I want those freedoms for myself. Simple symmetry requires that whatever freedoms and rights I want for myself I must equally allow other people.

Views of other Muslims

However, I recognised that many Muslims take the view that all legal and ethical principles must be derived from within Islamic sources, and at that time I had not done the necessary research. In between, Usama Hasan and Abdal Hakim Murad have addressed the correct Islamic analysis in a joint paper "What Islam Really Says about Violence, Human Rights and Other Religions" which is no longer available on the City Circle website due to its migration.

The Ottoman Caliphate, the supreme representative of Sunni Islam, formally abolished this penalty in the aftermath of the so-called Tanzimat reforms launched in 1839. The Shaykh al-Islam, the supreme head of the religious courts and colleges, ratified this major shift in traditional legal doctrine. It was pointed out that there is no verse in the Qur’an that lays down a punishment for apostasy (although chapter 5 verse 54 and chapter 2 verse 217 predict a punishment in the next world). It was also pointed out that the ambiguities in the hadith (the sayings of the Prophet) suggest that apostasy is only an offense when combined with the crime of treason.

These ambiguities led some medieval Muslims, long before the advent of modernisation, to reject the majority view. Prominent among them one may name al-Nakha’i (d.713), al-Thawri (d.772), al-Sarakhsi (d. 1090), al-Baji (d. 1081), and al-Sha’rani (d.1565). The debate triggered by the Ottoman reform was continued when al-Azhar University in Cairo, the supreme religious authority in the Arab world, delivered a formal fatwa (religious edict) in 1958, which confirmed the abolition of the classical law in this area.

However, Abdal Hakim Murad reminds us that radical Salafis and Wahhabis do not accept these verdicts.

Usama Hasan has also set out his thoughts in his piece "No compulsion in religion: Islam and the freedom of belief" which covers both blasphemy and apostasy. In particular, he discusses and distinguishes the hadith that are often used to justify an earthly penalty for apostasy.

Accordingly, I am adding my own contribution, having researched the subject to speak before a Jewish audience at the Liverpool Day Limmud. (I spoke on conversion into Judaism, into Islam and out of Islam.)

The argument for the death penalty

The most comprehensive argument I found in favour of the death penalty was from Abul Ala Mawdudi in the booklet The Punishment of the Apostate According to Islamic Law. While the linked translation was posted by two Christians opposed to Mawdudi's views, I have no reason to believe that the translation is not accurate. I encourage people to read the booklet, but find the analysis unconvincing. Not least, Mawdudi also regards banishment as an acceptable alternative punishment.

The argument against the death penalty

The clearest arguments that I found against the death penalty were in Apostasy, Freedom and Da'wah: Full Disclosure in a Business-like Manner by Mohammad Omar Farooq. I also recommend visiting the Apostasy and Islam blog which contains an extensive collection of further reading including citations of over 100 Islamic scholars, both ancient and modern, explaining why it is wrong to consider that Islam requires the death penalty for apostasy.

A view from Indonesia

Number 20 in the list of scholars cited by the Apostasy and Islam blog is Kyai Haji Abdurrahman Wahid. He was Indonesia’s first democratically elected president and served as chairman of the world’s largest Muslim organization, the Nahdlatul Ulama, from 1984 to 1999. He died in 2009. In 2012 one of his essays was included as a chapter "God needs no defense" in the book "Abraham's Children - Liberty and Tolerance in an Age of Religious Conflict" edited by Kelly James Clark. While most of that eight page essay is about blasphemy, he also addresses apostasy.

In examining the issue of blasphemy and apostasy laws, it is thus vital that we differentiate between the Qur’an – from which much of the raw material for producing Islamic law is derived – and the law itself. For while its revelatory inspiration is divine, Islamic law is man-made and thus subject to human interpretation and revision.

For example, punishment for apostasy is merely the legacy of historical circumstances and political calculations stretching back to the early days of Islam, when apostasy generally coincided with desertion from the Caliph’s army and/or rejection of his authority, and thus constituted treason or rebellion. The embedding (i.e., codification) of harsh punishments for apostasy into Islamic law must be recognized as an historical and political by-product of these circumstances framed in accordance with human calculations and expediency, rather than assuming that Islam, and shari’a, must forever dictate punishment for changing one’s religion.

A full analysis of the issue would make this posting far too long and is unnecessary in view of the detailed exposition in the two pieces linked in the section "The argument against the death penalty". However there some points I do want to make.

The distinction between apostasy and active treason

The traditional Islamic scholars such as Shafi fail to distinguish between apostasy as active rebellion seeking to overthrow the Muslim state and a peaceful decision to stop being a Muslim and live, for example, as a law-abiding Christian within the Muslim state. Most political jurisdictions have practiced the death penalty for treason, and it was perfectly reasonable for the Muslim state to do so. However, that does not resolve the question of peaceable change of religious belief.

Furthermore Allah does not mandate the death penalty even for active treason. In the Quran, verse 5.33 (Yusuf Ali translation) we find: "The punishment of those who wage war against Allah and His Messenger, and strive with might and main for mischief through the land is: execution, or crucifixion, or the cutting off of hands and feet from opposite sides, or exile from the land: that is their disgrace in this world, and a heavy punishment is theirs in the Hereafter." Accordingly, there are four alternative punishments available for active treason, two of which do not involve death.

The Quran explicitly talks about people who reject Islam

The Quran in verses 4.136 and 137 (Yusuf Ali translation) recognises that people may go astray repeatedly: "O ye who believe! Believe in Allah and His Messenger, and the scripture which He hath sent to His Messenger and the scripture which He sent to those before (him). Any who denieth Allah, His angels, His Books, His Messenger, and the Day of Judgment, hath gone far, far astray. Those who believe, then reject faith, then believe (again) and (again) reject faith, and go on increasing in unbelief,- Allah will not forgive them nor guide them nor guide them on the way." Such recalcitrants are jeopardising their position in the hereafter, but there is no penalty prescribed in this world.

Many people quote various Hadith in favour of the death penalty. However they fail to look at the full body of Hadith, or to subject the Hadith to the critical scrutiny practiced by Islamic scholars. The Hadith are addressed in detail by Mohammad Omar Farooq and the Apostasy and Islam blog. Those links should be read in detail to understand the issues properly.

To give just one quote from Mohammad Omar Farooq:

According to the principles established by hadith scholars, only mutawatir narrations [hadiths that have been narrated in exact words through so many different chains that any possibility of forgery or manipulation is precluded] yield certainty of knowledge. Any non-mutawatir hadith is known as ahad [solitary], and such solitary narration yields only probabilistic or speculative knowledge. For detail, please refer to my aforementioned essay.

The relevance of this mutawatir or ahad distinction is that none of the hadiths pertaining to apostasy is mutawatir and thus does not yield any certainty of knowledge. Also, it is generally agreed that no hadd punishment can be established on the basis of such ahad hadith.

The Apostasy and Islam blog contains quotes on apostasy from 100 Islamic scholars over the centuries.

It is clear that the Quran prescribes no earthly penalty for simply leaving Islam. It does prescribe four alternative penalties for active treason.

The Hadith regarding a penalty for leaving Islam are insufficiently reliable for them to be the basis of any earthly penalty. That is even before you consider whether any Hadith can overrule what is clear from the Quran, namely that God presribes no earthly penalty for abandoning Islam.

Those who argue that entry into Islam is a one-way street are wrong theologically. Islam pioneered freedom of religion a thousand years or more before the Christian world; that is something for Muslims to be proud of, instead of Muslims seeking to deny it.

Those who do seek to deny freedom of religion are generally repeating what they have been told by others, without a proper study of the original sources or the varied views of Islamic scholars. 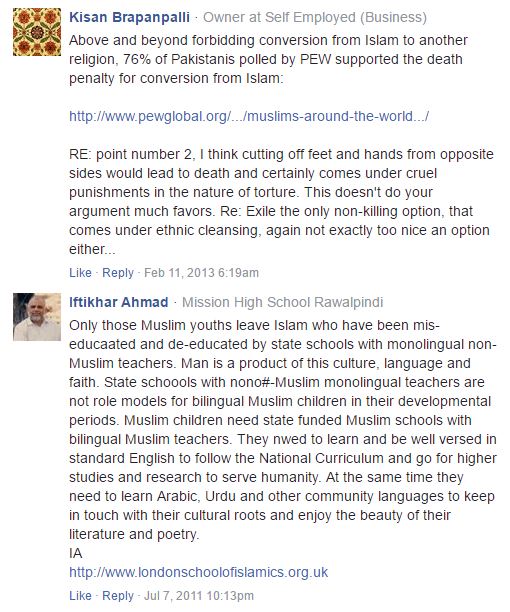 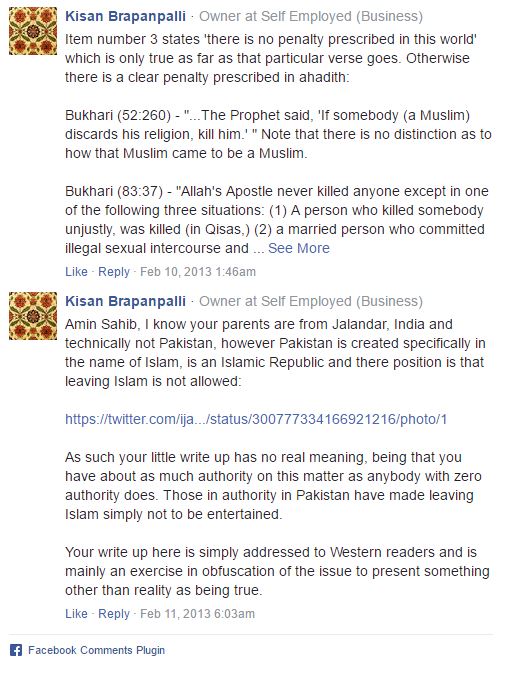