Earlier today, I gave my fourth "Thought for the week" on BBC Radio Manchester. I chose to base it upon a discussion that took place the previous Monday when I was speaking at the annual conference of the International Council of Christians and Jews. There are more details lower down on the page.

Last week the International Council of Christians and Jews held its annual conference in Manchester. I attended even though I am neither Christian nor Jewish! I was there to speak alongside my Jewish friend, David Berkley QC, on the subject of "Muslim Jewish relations in an increasingly secular Europe."

While the subject sounds quite dry, there was a funny incident which shows what our human nature is like.

Before this Jewish / Muslim closeness could develop too far, a Christian in the audience put his hand up. He reminded us that Christians can also claim descent from Abraham because the Bible says that Jesus Christ was a direct descendant of Abraham.

Later in the week I discussed this little incident with my wife. It shows how easily misunderstandings can arise.

Another problem comes when we allow our ancestors to divide us.

Occasionally tribes have bad relations with each other and give as the reason the fact that they are descended from ancestors who fought each other. Just because their ancestors fought each other is of course no reason why those tribes should fight today. My wife, who is a very wise woman, pointed out to me that if you are going to trace your ancestors, you should keep going until you get to Adam. Then remind yourself that all of us are Adam's descendants and therefore members of one family.

Presentation at International Council of Christians and Jews (ICCJ)

This year's annual ICCJ conference took place in Manchester. Some time ago, I was contacted by the Woolf Institute and asked if I would present a workshop. This was done jointly with David Berkley.

In Europe, Muslims and Jews face common pressures from majority populations that nominally profess Christianity but are increasingly secular, indeed anti-religious, in outlook. Recent examples include campaigns against shechita and halal slaughter and the growing number of voices attacking circumcision. Although Muslims and Jews can better resist such pressures by acting jointly, two factors have weakened collaboration on a collective response:

David Berkley and Mohammed Amin will discuss the thought processes that led them, along with others, to found the Muslim Jewish Forum of Greater Manchester in 2005 and briefly review what it has achieved. They will then proceed to discuss Muslim Jewish relations more widely in the UK and in the major countries of Europe.

David and I presented together, instead of taking turns to make separate presentations, and we used a single integrated slidepack. The slides are relatively self-explanatory, but the following comments may help when looking at the slides.

Photograph from the workshop

The photograph below shows, from left to right, David Berkley, John S. Sanni (a workshop participant) and Mohammed Amin. 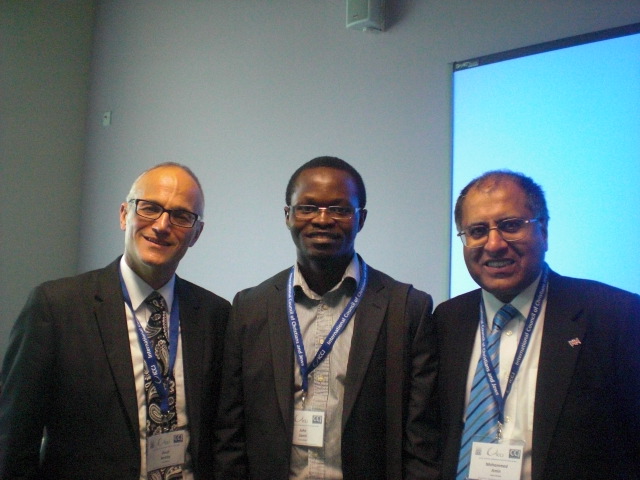