Looking specifically at Muslims, to what extent do a person's religious beliefs affect whether he becomes radicalised?

“Radicalised” in this context means that the person is willing to engage in violence for political ends, such as seeking to kill civilians with weapons (such as Mohammed Merah in France in 2012) or to become a suicide bomber as with the four Muslims who carried out the 7 July 2005 London bombings.

Whenever this question is asked, an almost automatic response from many people is to say something like “The so-called ‘Conveyor Belt’ theory of radicalisation has been disproved” as if that concluded the argument. To cite just two examples:

This approach is a rather trivial form of debating tactic. It is known in the UK as “Aunt Sally” and elsewhere as “Straw Man.” The tactic involves creating a false version of the opponent’s argument, an “Aunt Sally”, which can easily be proven to be false. The goal is to convince spectators that this somehow rebuts the opponent’s real argument.

What is the Conveyor Belt theory?

Those who claim it is disproved rarely state exactly what the theory is. However one look at a conveyor belt, illustrated below, shows what the conveyor belt theory means: 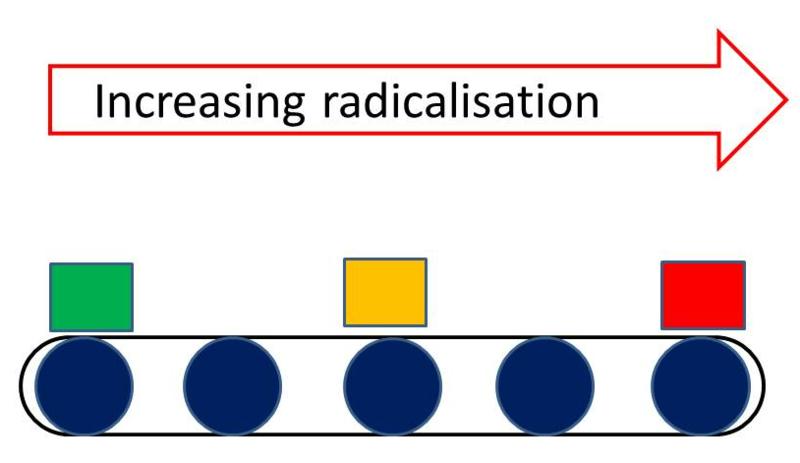 As soon as one writes down the Conveyor Belt theory, one sees how ludicrous it is.

It would be disproved by a single person who got involved with the ideologies promoted by terrorists but who failed to be radicalised. I am not aware of any serious political commentator who argues for the correctness of the Conveyor Belt theory.

It exists only as an Aunt Sally argument used by those who deny that religious beliefs have anything to do with radicalisation.

Radicalisation is a process. It can happen quickly or slowly, but in the context of Muslims there are some essential religious requirements.

If a believing Muslim is to carry out a suicide bombing, they must believe that this is a good act in the eyes of God, and not an act that will automatically condemn them to spending all of eternity in Hell.

The same applies to killing other people without ending your own life. If the Muslim concerned believed that killing a particular person or persons was going to automatically condemn them to spending all of eternity in Hell, they would not do it.

In my section of the book “7/7 Muslim Perspectives”, I wrote:

Looking at the suicide videos, the bombers clearly believed that the bombings they were about to carry out would be a good deed in the eyes of God. It is clear to me that these individuals did not expect to go to hell as a consequence of their actions but instead expected to go to heaven. If they had believed that they were going to hell, they would not have carried out their actions. Many brave people are willing to give up their lives for their religious beliefs in order to serve God with the hope of entering paradise. However I cannot conceive of anyone who is religious wanting to promote a political cause on earth, if this means consciously defying God and consciously choosing to be cast into hell for all eternity.

That is why I consider that analysing their religious beliefs is integral to understanding the thinking of terrorists, such as the 7/7 bombers, who are Muslims. That is especially true when they explicitly reference their religion when explaining their motivations.

In my view a more realistic analogy for radicalisation is not a conveyor belt but a funnel. 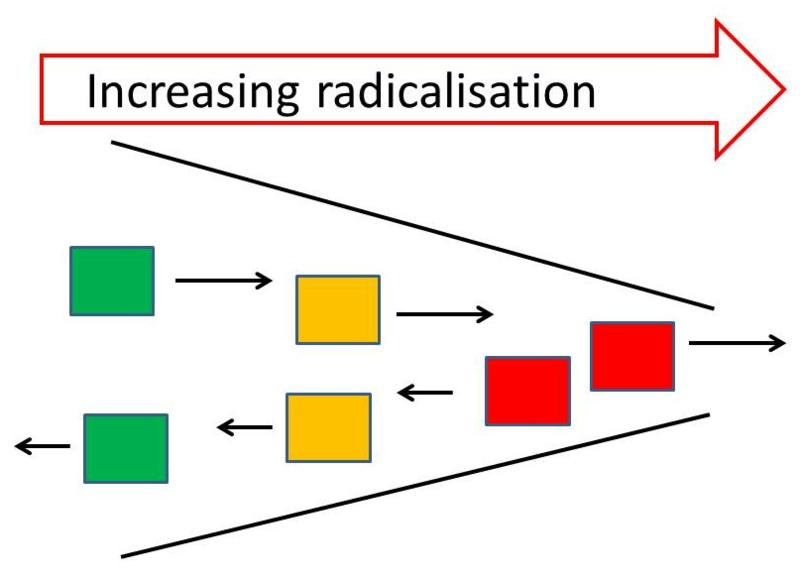 Here the funnel is a collection of religious beliefs. At the far right side is the full set of beliefs held by people (coloured red) who are in Al Qaeda, ISIS, the Taliban, Boko Haram and similar organisations. At the far left are ordinary Muslims (coloured green) who may share some of these views. There is traffic in both directions; some people get more radicalised, while other flirt with some of these beliefs and then go back to being normal practicing Muslims.

However you cannot become a radicalised Muslim unless you believe some specific things.

The most important of these is that in certain cases God regards it as a good deed for you to kill other people, even when you are not an enlisted soldier in the armed forces of a recognised state engaged in a lawfully declared military conflict. Another key belief is regarding many self-classifying Muslims as not genuinely being Muslim, so that they can be killed with God regarding that as a good deed rather than an evil deed.

There are other more detailed requirements which it is not practical to explore in this short piece.