Every so often, the subject of blasphemy becomes front page news. The most recent incidents have been the film "Innocence of Muslims" posted on the Internet and some cartoons published by the French magazine "Charlie Hebdo", both of which have disparaged Islam in different ways.

Pakistan has a blasphemy law which has often led to violence and murder, for example the assassinations of Salman Taseer (Governor of Punjab Province) and of Shahbaz Bhatti (Federal Minister for Minorities).

Reuters reports that at the United Nations politicians from a number of Muslim majority countries have called for worldwide legislation against blasphemy. Such legislation is unlikely to happen since countries such as Britain and the USA value freedom of speech. In Britain, blasphemy only ever applied to protect the Christian religion, and was abolished as an offence in 2008. In the USA I believe that blasphemy has never been a crime, although I have not researched the legal history; I am not aware of any American blasphemy prosecutions.

I have written about blasphemy on the Conservative Home website and have reproduced the piece below. The use of the word "decriminalised" in the title is UK specific, since blasphemy (against Christianity) used to be an offence in the UK until it was decriminalised.

Mohammed Amin is Vice Chairman of the Conservative Muslim Forum. He is writing in a personal capacity.

After the furore sparked by the uploading to YouTube of a 14 minute excerpt from the film “The Innocence of Muslims”, there have been many calls around the world for the film to be banned. These are often accompanied by demands for stronger legislation against material which offends people’s religious beliefs. I disagree, and believe that US law with its First Amendment protections for the freedom of speech and freedom of religion gets it right, with Britain being almost as free as America.

Blasphemy law in the UK

Following the publication in the UK of “The Satanic Verses” by Salman Rushdie, many British Muslims were outraged by a perceived insult to Islam. There was an attempt to launch a private prosecution but the magistrate asked to issue a summons refused to do so. Judicial review was sought but in the case R v Chief Metropolitan Stipendiary Magistrate; Ex parte Choudhury ([1991] 1 All England Law Reports 306) the Divisional Court decided, in the words of Lord Watkins, "We have no doubt that as the law now stands it does not extend to religions other than Christianity ...”

This produced a situation which I regarded as grossly unfair, since Tim Montgomerie’s [Tim Montgomerie is the editor of Conservative Home and a Christian] religion was protected against blasphemy while mine wasn’t. Accordingly, either blasphemy protection needed extending to other religions, or it needed to be removed from Christianity. Parliament made the correct choice when the Criminal Justice and Immigration Act 2008 s.79 abolished the common law offences of blasphemy and blasphemous libel, and also dropped references to blasphemous libel in the Criminal Libel Act 1819 and the Law of Libel Amendment Act 1888.

Since then, we have had a level playing field amongst religions in the UK with none of them being protected against blasphemy.

What the Government should do

Some countries, primarily Muslim majority countries but also including countries such as Singapore, have banned the video from being accessed in their country. YouTube has complied with such requests as it has a policy of complying with local law despite being based in the USA. In my view the law in the UK does not prohibit the viewing of this video, and the Government should resist any pressure to change the law.

In passing, there have been at least two attempts to launch e-Petitions about the video on the Government website, which have been rejected on the grounds that it is a matter for the British Board of Film Classification. (Obviously only if the film’s producers seek a cinema or DVD release in the UK.)

Deputy Mayor of London Munira Mirza has recently written about the threat to freedom of speech posed by the Public Order Act 1986 s.5 which criminalises “threatening, abusive or insulting words or behaviour.” I am not aware of anyone trying to use section 5 with regard to blasphemy, but in any event agree with Munira that the section needs amendment, since merely insulting people should not be an offence.

How Muslims should respond to such provocations

Firstly, Muslims need to think about the theological issues. To me the following points are self-evident:

Accordingly the only injured parties when Islam is denigrated are those Muslims whose feelings are hurt.

Having your feelings hurt is no excuse for rioting, let alone for trying to kill those who have upset you. However the abolition of earthly penalties for blasphemy does not make it a risk-free activity. Those who insult God risk being condemned on the Day of Judgment to eternal punishment in Hell; being an atheist is no protection against God punishing you.

Secondly, despite having a Booker prize winning author, the novel “The Satanic Verses” would have remained unknown to most people if British Muslims had not organised protest marches and burnt the book in the streets. It was the reaction of Muslims that caused the book to become a global best seller.

Similarly, “Jyllands-Posten” is a Danish language newspaper that almost nobody outside Denmark had heard of, until some Muslims went around the Middle East with copies of the cartoons it had published of the Prophet Muhammad (pbuh) encouraging Muslims to protest. The protests made the cartoons world famous, and caused millions of people to view them either when other newspapers reproduced them or on the internet. “The Innocence of Muslims” was uploaded to YouTube on 1 July but nobody paid it any attention until an excerpt was broadcast on Al-Nas TV, an Egyptian Islamist television station on 8 September, with the presenter calling upon Egyptians to protest against the film.

In comparison, “The Jewel of Medina” by Sherry Jones sank without trace, and most non-Muslims (and I suspect most Muslims) have never heard of it. When it was published I was part of the wider leadership team at the Muslim Council of Britain, and along with others managed to persuade the MCB to minimise its response to the book to the bare minimum. While there was some criminal behaviour, with the UK publisher’s house being firebombed, the general lack of reaction meant that the book did not receive the free publicity given to “The Satanic Verses” or “Jyllands-Posten.”

At an individual level, Muslims who do not wish to be offended should avoid reading or viewing the material concerned. I have never read “The Satanic Verses” or “The Jewel of Medina” and have no intention of doing so. I looked at the Jyllands-Posten cartoons briefly, once, to see what the fuss was about and have never seen any reason to look at them again. A 90 second excerpt from “The Innocence of Muslims” was enough to convince me that the film had zero merit and that I did not wish to waste my time watching the full 14 minutes on YouTube. Nobody can hurt my feelings unless I choose to let myself be hurt.

Dr Usama Hasan has written an eight page analysis "No Compulsion in Religion: An Islamic Case Against Blasphemy Laws" demonstrating that Islam does not prescribe any earthly penalty for blasphemy.

His conclusion is unambiguous:

There is no explicit sanction in the Qur’an and Sunnah (teachings of the Prophet Muhammad) for the criminalisation and punishment of blasphemy: in fact, the opposite is the case; the few scriptural texts that are misquoted in this regard all refer to wartime situations, and the harsh, mediaeval Islamic jurisprudence on blasphemy and apostasy was developed centuries after the Prophet himself.

As noted earlier, the Qur’an affirms freedom of faith and religion, with some verses revealed specifically to safeguard this principle for Jews and Christians, even though some of the latter’s beliefs would constitute blasphemy (kufr or unbelief) from a Muslim viewpoint: e.g. rejection of the Prophethood of Muhammad, rejection of the Christhood of Jesus and deification of Christ.

A perspective from Indonesia

Kyai Haji Abdurrahman Wahid was Indonesia’s first democratically elected president and served as chairman of the world’s largest Muslim organization, the Nahdlatul Ulama, from 1984 to 1999. He died in 2009. In 2012 one of his essays was included as a chapter "God needs no defense" in the book "Abraham's Children - Liberty and Tolerance in an Age of Religious Conflict" edited by Kelly James Clark. The beginning of his essay puts the point very well.

"As K.H. Mustofa Bisri1 wrote in his poem Allahu Akbar: “If all of the 6 billion human inhabitants of this earth, which is no greater than a speck of dust, were blasphemous… or pious… it would not have the slightest effect upon His greatness.”

Omnipotent, and existing as absolute and eternal Truth, nothing could possibly threaten God. And as ar-Rahman (the Merciful) and ar-Rahim (the Compassionate), God has no enemies. Those who claim to defend God, Islam or the Prophet are thus either deluding themselves, or manipulating religion for their own mundane and political purposes, as we witnessed in the carefully manufactured outrage that swept the Muslim world several years ago, claiming hundreds of lives, in response to cartoons published in Denmark. Those who presume to fully grasp God’s will, and dare to impose their own limited understanding of this upon others, are essentially equating themselves with God, and unwittingly engaged in blasphemy."

I recommend reading the full eight page essay, which also deals with the subject of apostasy.

I recommend reading their report "Blasphemy and Related Laws in Selected Jurisdictions" to see how widespread such laws are. 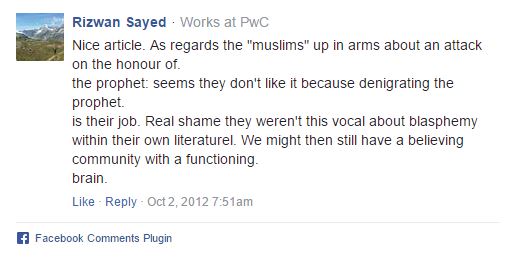