I was saddened and disgusted to read in the Daily Telegraph newspaper on 10 July 2010 that a Muslim immigrant to Canada has become the first person in Canada charged with promoting the genocide of Jews.

While I have no knowledge of whether the person is guilty of the offenses alleged, I have no doubt that the statements he is alleged to have written have no place in Islam, and if written by a Muslim can only bring shame upon him.

What does “antisemitism” mean?

Page 11 of the European Union Monitoring Centre on Racism and Xenophobia report "Manifestations of Antisemitism in the EU 2002 - 2003" explains why they used "antisemitism".

In the present report, the term “antisemitism” will be used when referring to anti-Jewish thinking as well as attitudes and acts of prejudice and/or hostility against Jews (as Jews) after 1945. The notation “antisemitism” will be given preference to the notation “anti-Semitism”. This allows for the fact that there has been a change from a racist to a culturalist antisemitism, and in this context helps to avoid the problem of reifying (and thus affirming) the existence of races in general and a “Semitic race” in particular.

Microsoft Word's spell-checker uses "anti-Semitism." However the UK All Party Parliamentary Group Against Antisemitism gets the spelling right. In the past I have tended to use Microsoft's spelling, but I have now standardised on antisemitism. However I am not changing the URL of this or other web pages to avoid breaking links that people may have created.

Linguists classify languages into groups, based on similarities in vocabulary and grammatical structure and call both Arabic and Hebrew Semitic languages. Similarly, even before modern genetics provided a scientific way of studying human descent, Arabs and Jews have been referred to as Semitic peoples.

Accordingly, people sometimes argue that antisemitism is not a well defined term, querying whether it applies to hatred of Arabs as well as Jews. Others use a similar play on words to contend that Arabs by definition cannot be anti-Semites.

However, the word “antisemitism” has a precise meaning in English. Whichever English language dictionary you choose, you will find a definition similar to that in Wordnet 3.0 from Princeton University “the intense dislike for and prejudice against Jewish people." One may argue that it is illogical to restrict the term antisemitism to Jews, but the English language does not claim to be logical. In the rest of this article, this standard usage is applied.

Historical comparison of the Christian and Muslim treatment of Jews

Christian Europe has a terrible record of antisemitism over its 2,000 year history. Notable stains include the expulsion of the Jews from England, the forced conversion, expulsion or killing of Jews in Spain, massive pogroms in Russia and within our lifetimes the Holocaust.

Unlike Europe, in the Muslim ruled lands Jews and Christians had a clearly defined place in society. They were categorised as “dhimmi” (protected people) with clearly defined legal rights and obligations. For example, they were exempt from military service and from payment of Zakah (the compulsory charitable tax levied upon Muslims) but instead were liable to pay a different tax called jizyah payable by non-Muslim citizens.

As dhimmi, they were able to practice their trades, observe their religion and build places of worship. They were governed by their own personal law arbitrated by Jewish religious courts, the Beth Din, whose judgement would be enforced by the state. Much of the Talmud was written by Jews living under Muslim rule. It was also Muslim rulers who offered sanctuary to Jewish refugees from England and Spain after the expulsions. Rabbi Moshe ben Maimon (commonly known as Maimonides) taught at Al-Qarawiyin in Fez, Morocco, the oldest university in the world. Jews could, and did, rise in society as high as the position of “wazir” (prime minister) even though they could never be the emir or caliph (king).

Zionism and reactions to it

Sadly, in the 20th-century Zionism and its impact on the Middle East have poisoned relations between Muslims and Jews. After Britain captured Palestine from Ottoman Turkey, conflicts gradually developed between the inhabitants of Palestine and the incomers seeking to create a Jewish state in their midst, culminating in the war of 1948. Since being expelled from their homes, Palestinian Arabs have sought to recover their land. Initially this was seen as a national territorial struggle, not a religious conflict. That is evidenced by the participation in the struggle of Palestinian Christians such as George Habash alongside Muslims, as well as the names of the Palestinian movements such as the Palestine Liberation Organisation, the Popular Front for the Liberation of Palestine or Fatah which is an Arabic acronym for Palestinian Liberation Movement.

In the recent past, the nature of the Palestinian resistance has changed, as it has become increasingly dominated by factions inspired by religion. This is shown by the names of organisations such as Islamic Jihad, the Al Aqsa (the name of a mosque on the Temple Mount) Martyrs Brigade and Hamas (which is an Arabic acronym for Islamic Resistance Movement). The increased religious identification has led some of these movements to risk drifting from anti-Zionism into antisemitism.

Perhaps the clearest example of the drift into antisemitism is found in the Hamas charter. Article 22 repeats the myth of the world Jewish conspiracy. Recoiling in horror from the slanders in Article 22 is the correct reaction for both Muslims and non-Muslims. However when reading the charter, it is sobering to reflect on how Palestinians’ experience of 60 years of seeing America, the world's most powerful country, regularly subordinate its national interest to its support for Israel might cause them to believe in the world Jewish conspiracy as summarised in article 22.

Outside Palestine, Muslims have naturally sympathised with their co-religionists and are almost universally anti-Zionist. Zionists often argue that anti-Zionism is inherently antisemitic; the invalidity of this contention is most easily demonstrated by the fact that many Jews have opposed Zionism and continue to do so. In my opinion, most anti-Zionist Muslims have no difficulty avoiding antisemitism.

Sadly however I find real antisemitism amongst some Muslims just as I find it amongst some Christians. Regardless of the factors that caused them to become antisemitic, they usually justify their views by selective reference to the Quran and to Hadith (narrations of the sayings and actions of the Prophet, peace be upon him.)

For example, the text in Quran 5.51 (Muhammad Asad “The Message of the Quran”) “O you who have attained to faith! Do not take the Jews and the Christians for your allies: they are but allies of one another ...” is often used to criticise cross-religious friendships.

However Muhammad Asad’s footnote to this verse goes on to explain “As regards the meaning of the "alliance" referred to here, see 3:28, and more particularly 4:139 and the corresponding note, which explains the reference to a believer's loss of his moral identity if he imitates the way of life of, or - in Quranic terminology - "allies himself" with, non-Muslims. However, as has been made abundantly clear in 60:7-9 (and implied in verse 57 of this surah), this prohibition of a "moral alliance" with non-Muslims does not constitute an injunction against normal, friendly relations with such of them as are well-disposed towards Muslims. It should be borne in mind that the term ‘wall’ has several shades of meaning: "ally", "friend", "helper", "protector", etc. The choice of the particular term - and sometimes a combination of two terms - is always dependent on the context.”

Conversely, Muslim anti-Semites choose to ignore verses such as Quran 2.62 (Muhammad Asad “The Message of the Quran”):

“VERILY, those who have attained to faith [in this divine writ], as well as those who follow the Jewish faith, and the Christians, and the Sabians - all who believe in God and the Last Day and do righteous deeds - shall have their reward with their Sustainer; and no fear need they have, and neither shall they grieve.”

Similarly Muslim anti-Semites ignore Quran 5.5 (Muhammad Asad “The Message of the Quran”), which is referring not to converts but to Jewish and Christian women who retain their religions:

“Today, all the good things of life have been made lawful to you. And the food of those who have been vouchsafed revelation aforetime is lawful to you, and your food is lawful to them. And [lawful to you are], in wedlock, women from among those who believe [in this divine writ], and, in wedlock, women from among those who have been vouchsafed revelation before your time -provided that you give them their dowers, taking them in honest wedlock, not in fornication, nor as secret love-companions. But as for him who rejects belief [in God] - in vain will be all his works: for in the life to come he shall be among the lost.”

Similarly, while there were conflicts between Muslims and some of the Jews in the early years in Medina, the Prophet (peace be upon him) treated Jews with the same respect that he treated other human beings. A simple example is the Hadith in Bukhari Volume 2, Book 23, Number 398:

Regardless of the pain they feel at the suffering of the Palestinian people, any Muslims inclined towards antisemitism need to remember that it has no place within Islam. They need to explore what the Quran actually teaches and relearn their 1,300 year history of religious tolerance.

Why I wrote the above piece

I abhor all types of racial and religious bigotry. antisemitism cast a terrible blight upon the last century (see my piece Reflections on visting Auschwitz) and is sadly found amongst many people from all backgrounds. However I feel particularly angered by antisemitism amongst Muslims, because I expect better from my co-religionists.

After I published the above, a Muslim friend wrote and mentioned a short four minute video about antisemitism created by his 12 year old son, "Pages of Hope", which is on YouTube. I found it very moving, especially the way the young author links the Holocaust to other cases of injustice and of hope. The most moving image in the video for me was the photo of Barack Obama, as President and therefore the head of state of the USA, laying a wreath at Yad Vashem, when 60 years ago people of his colour faced massive discrimination and indeed violence in most parts of his country. 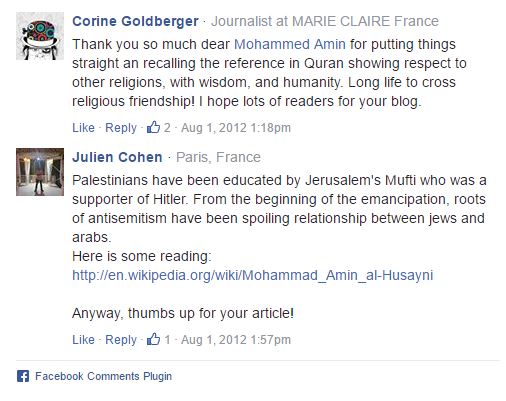