On average every day 14 people in Britain convert to Islam.

While Britons have been converting to Islam occasionally for hundreds of years, the number of converts has only become significant in the last few decades. Even now converts represent only a small proportion of Muslims in Britain while Muslims themselves remain a small minority; hence the title of the report.

Faith Matters is a small not for profit organisation led by a friend of mine, Fiyaz Mughal OBE. They have just published a short (40 page) report "A Minority within a Minority: a report on converts to Islam in the United Kingdom"which is available free from their website. The author, Kevin Brice, is himself a convert to Islam.

Before the author outlines the new work undertaken for the report, he includes a short literature survey. This will be very helpful to readers who want to explore the subject further.

How many converts are there? 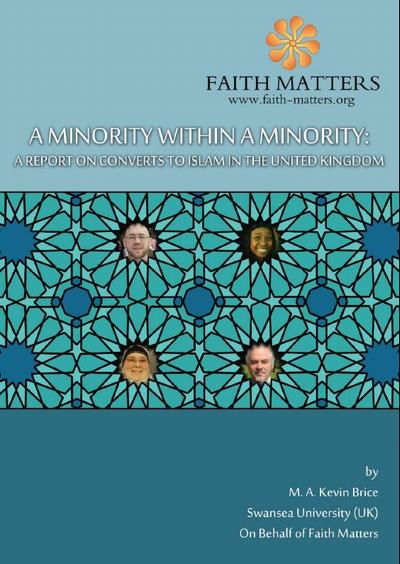 Cross-referencing these two questions allows the identification of individuals who have changed their religion. The report contains a table analysing the 41,639 Muslims in Scotland who are the census by ethnic group, and similarly analysing the 1,224 people in the Scottish census who reported that they were Muslims but did not have a Muslim upbringing. This allows the calculation of the percentage of Muslim converts in each ethnic group.

The author then takes the England and Wales census which had just over 1.5 million self-reported Muslims. He analyses them by ethnic group and then uses the conversion ratios from Scotland to estimate the number of converts in each ethnic group. These total approximately 59,500 converts which when added to the Scottish total gives approximately 60,700. There was no mechanism for estimating converts to Islam in Northern Ireland but as the Northern Ireland census reported only about 2000 Muslims, omitting Northern Ireland is not statistically significant.

There is no data of equivalent reliability regarding the number of converts post-2001. The author estimates the annual total of 5,200 conversions (hence my “14 per day” above) as follows:

The author is reassured that his calculated conversion rate is broadly comparable with a study financed by the German Interior Ministry and also a survey in France.

The author acknowledges the roughness of the above calculations; better data should become available after the 2011 census.

How do the media portray converts?

The author used the LexisNexis database of British newspapers for the period September 2001 to August 2000 searching on the terms "convert" with any of "Islam" or "Muslim" or "Moslem." After confirming that the story related to converts to Islam in the United Kingdom, each story was then coded according to a predetermined codebook depending on the main focus of the story.

The report contains a number of extracts from such newspaper stories pointing out the alarmist language. In particular, the stories suggest that people are converting to Islam for the specific purpose of terrorism, converting to sign up for holy war etc. The author rightly points out that such stories create a very negative impression of converts to Islam in the minds of readers.

The author does not however consider whether there might be any justification for the concerns of newspapers. He rightly points out that converts to Islam who become terrorists are a tiny percentage of the total number of converts to Islam. However he fails to mention that converts are statistically over represented within the population of British Muslims who engage or seek to engage in acts of terrorism.

While converts constitute only 4% of British Muslims, I believe they represent significantly more than 4% of British Muslims who have committed, or attempted to commit, terrorism. This is not based upon my keeping records but simply from the many named individual converts who have featured in news stories, for example one of the 7/7 bombers. Many other names will come to mind.

If I am correct and converts are statistically over represented, that would not be a surprise. In general converts into any religion are more committed to it than those born within it. Conversely they often lack a deep understanding of their new religion simply because they have practiced it for only a short period of time. The combination of greater dedication and lesser understanding can mean that a new convert is easier to convince that Islam needs violent defence.

The author carried out an online survey to which he received 122 completed responses. He regards this as a large response; I have insufficient background in online surveys to assess that claim.

92 of the 122 respondents were sent a follow-up survey but only 32 of these were returned.

The author points out that marriage is often suggested as playing a major role in the decision to convert to Islam, particularly for women. Of the 122 respondents, 55% were married to a born Muslim which suggests that for at least 45% of the respondents there was no direct link between conversion and marriage. The author’s analysis of the responses to the follow-up survey plus more detailed analysis of some of the textual comments supplied by respondents indicate that marriage played a very minor role in the survey sample’s decision to convert.

The author recognises that the sample respondents were what he calls "converts of conviction" as they were practising Muslims and received the survey through the New Muslim Project and various local "New Muslim" groups and other active Muslim channels. The author also refers to "converts of convenience" who go through the motions of converting for marriage but do not take Islam seriously afterwards. He recognises that such individuals would be unlikely to be represented amongst the respondents.

A number of interesting points emerge from the survey:

Overall the section covering the survey is particularly interesting to read, particularly the free-form comments from the respondents. Many point out how they can be a bridge between people who are born Muslims (almost entirely from the immigrant communities) and the native white British non-Muslim society. Apart from anything else, they can see more clearly than born Muslims the distinctions between the religiously mandated requirements of Islam and cultural practices from South Asian or Arab countries.

I found the report very interesting to read. Being free and only 40 pages long it is extremely accessible and I would recommend it to everyone, whether Muslim or non-Muslim, who is interested in the challenges converts to Islam face in our society today.